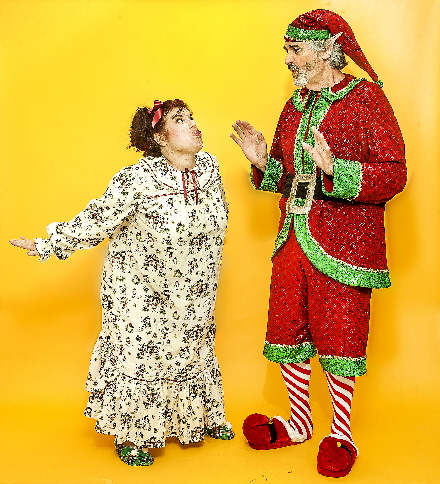 Over 21 years, City Theatre’s ever-expanding enterprises have developed and maintained a brand-level reputation for entertaining theater; its return to cool weather programming with the current edition of Winter Shorts is just as diverting.

As usual, some of these vignette-length scripts are better than others, but skilled acting, direction and creative team in this edition elevate and camouflage the weaker scripts so that the entire evening feels like a consistently charming way to spend a holiday night in Miami.

All eight plays have a holiday element, from a spiky Hannukah family gathering, to a little girl asking a Santa’s elf for a grisly gift, to an alcoholic activist protesting Valentine’s cards to a morose lesbian not certain she wants to see the New Year arrive.

Some are hilarious, some feature humor coating a serious theme, and none of them are headscratchers, as in why did they choose this one, which has not always been the case. If you are in a festive mood, Winter Shorts will fuel that gaiety, if you’re having the holiday blues, these will give you some giggles and guffaws, but few will stick with you; they are not engaging, just diverting.

The evening opens with a revival of Feliz Navidad by Staci Swedeen in which a harried brusque aunt under time pressure (Margot Moreland) desperately tries to get help from a striving-to-be-friendly department store clerk in the toy department (Diana Garle) – except that the clerk speaks very little English and the shopper speaks no Spanish. Directed by the fine actress Vanessa Elise, this curtain raiser is one of the funnier entries as the two struggle to surmount the language barrier.

Santa Doesn’t Live Here Anymore (a Miami premiere by Patrick Gabridge and directed by veteran thespian and recently retired Broward College educator Deborah Kondelik) features little Jeffrey (Jovon Jacobs) on Christmas Eve discovering that his parents Dave Corey and Rita Joe have been lying to him about the existence of Santa Claus. Except that Jeffrey is 30 years old and living at home.

Moreland becomes the outsized matriarch of a family gathering in Sheri Wilner’s comic The Miracles of Hannukah, directed by Kondelik. A son (Alex Alvarez) has brought home a Jewish girlfriend (Rita Joe) to celebrate with the father (Dave Corey) and acerbic daughter (Garle). Despite the witty banter of the hyper-articulate group, a more profound subject emerges when tradition requires them to describe a personal holiday miracle akin to the Maccabees’ menorah burning for eight days. All of the family’s miracles are pretty prosaic and rooted in the verifiable world. But Joe’s tale posits a genuine Biblical-level miracle in her life. That highlights the difference between people of faith and those who practice religion more by rote and tradition than genuine belief.

this movie (a world premiere by Amanda Keating deftly directed by City Theatre’s Artistic Director Margaret M. Ledford) is a gentle tale of a reserved withdrawn young man (Jacobs) sitting alone in a movie theater during Thanksgiving. His space is invaded by an ebullient, chatty but extremely quirky woman (Garle) who knows that management is so inattentive that she plans to spend all day seeing a procession of third-rate movies on the bill while chomping down on a week’s worth of fast food and munchies. Ledford is an expert at finding just the right tone of humor and pathos and adding grace notes such as having Garle stuff potato chips in her mouth while she’s talking. This terribly mismatched pair’s eventual bonding over Wendy’s hamburgers instead of turkey is a warm message of hope in human connection.

Fly, Baby (Ledford again directing a world premiere script by Gina Femia) exemplifies how this skilled group makes something memorable out of a debatable schizophrenic script. Garle is a deeply depressed lesbian on a Brooklyn rooftop staring at an urban skyline a few minutes before the ball drops on New Year’s Eve. She is joined by a friend (Joe) who gets her to detail her sense of hopelessness. Switch over to another holiday party, this one being thrown by the real Santa Claus (the tall slender African-American Jacobs in Santa pants but a basketball-style undershirt) and the real Tooth Fairy (the burly masculine Alvarez dressed in high drag). A “gift” from Santa prevents Garle from committing suicide. This works only because Garle and Ledford a create character whose emotional pain is so profound and affecting that the audience bleeds for her.

Becky’s Christmas Wish (by Ashley Lauren Rogers and directed by Ledford) savors its black comedy premise: one of Santa’s elves (a tall bearded time-grizzled Corey) has been assigned to go to the bedroom of the best little girl in the area and grant whatever she wishes or he must disappear forever. Unfortunately, the little girl is a bratty hellion (Moreland) who insists that the wish to be fulfilled is that the elf kill her sister. The wrangling shows that script is just adequate and goes on a bit too long, but Corey is delightful as he tries to get out of the assignment and Moreland is downright brilliant as the gleefully bloodthirsty client.

Occupy Hallmark (by Cassie M. Seinuk and directed by Ivan Lopez) also has a humorous elevator pitch: A drunken man (Alvarez) mourning a recent breakup with a girlfriend is protesting the racket of holiday cards by sitting outside a shuttered Hallmark Card store after it closed on Valentine’s Day. A more sane friend (Joe) discovers him and tries to talk him out of his morose pursuit, but he ends up enlisting her. Without the actors’ complete commitment, this too lengthy script would not land at all.

Closing the night, Oy Vey Maria (Ledford directing a script by Mark Harvey Levine) is a delightfully silly hoot taking place in the manger with Mary (Garle) and Joseph and the newborn Jesus. But the bucolic scene is interrupted by the hurricane force arrival of Mary’s parents with Moreland playing the quintessential kvetching Jewish mother albeit dressed in desert garb. Moreland is hilarious and the script is cute, such as Dad thinking the three kings are the Weismans and the ever-more put upon Mary chasing off Jacobs as the little drummer boy.

City Theatre keeps expanding its brief. Once just the creators of Summer Shorts, it has added Shorts Gone Wild with an LGBTQ flavor paired with Island City Stage in Wilton Manors, kids shorts, an annual playwright’s conference, several public readings of plays being considered for the future, plays being performed in middle schools, and now between these events, full-length plays such as September’s production of Robert Schenkkan’s Building the Wall. The company had produced Winter Shorts in 1999 and 2001, but not since then.