My Name Is Asher Lev Is Compelling Work Of Art 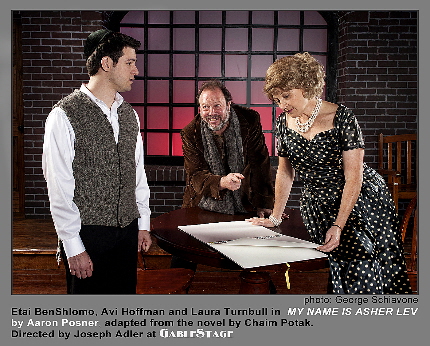 Like walking toward a great work of art at the end of a hallway, the magnificence of GableStage’s production of My Name Is Asher Lev grows slowly as you approach it, as you spend time with it, delving deeper until the accumulated detail of its brushstrokes reveals its full splendor.

This moving tale of a boy maturing into a world-class painter incisively  depicts the considerable and specific price of heeding, pursuing and staying true to an artistic calling.

As the title character is compelled to become an artist in contravention of his family, his heritage and the dictates of his religion, Asher Lev’s premise sounds like the spine of just another play about an individual rebelling against conventional society. But Aaron Posner’s 2009 adaptation of Chaim Potok’s 1972 novel depicts this thesis with such depth and unblinking honesty that it creates a tactile, visceral conflict powered by a passion that will resonate with creative souls regardless of art form or heritage.

But director Joseph Adler and a trio of actors — Avi Hoffman at the top of his game, Laura Turnbull and a revelatory performance by young Etai BenShlomo – elevate the raw material into a night that audiences will talk about several seasons hence.

This is a memory play narrated by an acclaimed but controversial artist awash in unspoken regret. In flashbacks out of chronological order, Asher traces the development of his talent during the 1950s in Brooklyn. His almost preternatural skill becomes evident even at six years old when the inquisitive child begins sketching. It horrifies his Hasidic parents, Aryeh, a political and educational emissary to the outside world for a powerful rebbe, and Rivkeh, a loving but submissive wife traumatized by the death of her brother who did similar work for the rebbe.

As Asher enters adolescence, he becomes increasingly interested in sketching the nudes and crucifixions he sees in museums. It further upsets his parents who discourage this waste of time that could be spent studying the Torah and the Talmud, and which they think may emanate from the Sitra Achra, or Other Side.

This sets up profound and escalating collisions between the restrictions of the religion that Asher never abandons and a need to express himself that is as physical a need as oxygen. During one clumsy attempt to understand each other, Asher accuses his father of “aesthetic blindness,” which certainly is true, but his father accuses Asher of “moral blindness,” which is absolutely true as well. It is only one of the conflicts that also include generational divergence in an evolving society, the clash between art and religion, and the conflict between the individual and society. The protagonist says over and over, “My name is Asher Lev,” because this story is his search for identity.

It culminates during the five-year apprenticeship to a non-practicing Jewish artist, the vibrant Jacob Kahn. When Asher discovers an image to paint that epitomizes and reconciles all of his feelings, he faces a dilemma because but his masterpiece is guaranteed to alienate his family and community as certainly as a Mapplethorpe photo.

I haven’t read the source novel, but Posner who specializes in adaptations, seems to have been faithful to Potok’s spirit. He incorporates some lovely lyrical phrasing into the dialogue as well as an elegiac cadence for Asher’s reminiscences.

Adler’s personal kinship with these characters is evident in the passion that infuses this production. In many of his productions, Adler’s physical staging is nearly invisible and often involves two people simply sitting next to each other talking. A few such scenes exist here, but frequently this time, his characters restlessly roam the stage as they seek truth and understanding.  There’s a few moments when the script could hurry things along a little, but that’s not Adler’s fault.

BenShlomo has been pretty busy as a New York and regional actor since leaving Coral Springs and J.P. Taravella High in 2005 with few appearances back home. But his work here promises a long career worth following.

From the opening moment, he delivers a sense of a young man proud of his accomplishments but quietly rueful at the as-yet unrevealed cost. As the play progresses, BenShlomo excels portraying someone in the grip of a compulsion he cannot resist, one that feels so right that he cannot understand why anyone would think there is anything wrong with it. But as the price for such a course becomes increasingly clear, as is the damage he must do to those he loves, the previously controlled disquiet ramps up into a palpable torment.

Hoffman may put bread on the table with his Too Jewish series, but in recent years he has proven his dramatic chops in such works as GableStage’s Superior Donuts. But as he gets older, these skills continue to deepen, on display in such performances as his tour de force this year as the storyteller in Outré Theatre Company’s An Iliad. But it might be argued that he has never been better than he is here. He does not simply don the two “theater roles” as the authoritarian father and the iconoclastic mentor – two characters he has done riffs on before. Here, he just becomes these people without a visible shred of “acting.” He is equally convincing as the tradition-bound patriarch insisting that his son pursue a righteous life serving Mankind, as he is as the Dionysian artist.

Turnbull has a less well-defined role to play, but she, too, gives a persuasive performance of a woman trapped between the warring men in her life.

As usual, GableStage’s reliable roster of designers deliver an evocative environment that is essential but never calls attention to itself. Lyle Baskin’s set is a bit unusual in its mixture of cold brick and warm woods, but the skylight is an inspired touch and the translucent windows provide a dead perfect final image. This is a cinematically fluid play that switches scenes in the moments between breaths, so credit Jeff Quinn’s subtle lighting changes to communicate, almost subconsciously, the travels through time and space.  Ellis Tillman has garbed everyone authentically with special mention for Jacob’s raffish outfit. You have to love his rakish fedora. Matt Corey’s sound design includes a great deal of elegiac, plaintive or jittery solo violin music as underscoring and to indicate changes in scene and tone.

GableStage’s 16th season will be a watershed year one way or the other with its upcoming expensive co-production of Tarell Alvin McCraney’s Antony and Cleopatra, as well as the promising but still uncertain deal for the county to take over the Coconut Grove Playhouse with GableStage as the operating partner. But if Asher Lev as the opening production is any indication, this also may be a banner year artistically.