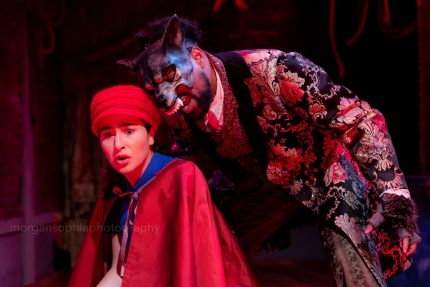 As Theatre Lab has shown repeatedly, and does again with its current Red Riding Hood, “family theater” is a bit different than most children’s theater.

The best children’s theater has much of the same production values and standards of “adult theater,” sometimes featuring adults, sometimes populated by conservatory students. You can see admirable examples of excellence at Florida Children’s Theatre, Actors’ Playhouse, Area Stage Company and other companies.

While a few take on mainstream fare slightly sanitized (Sweeney Todd Jr.?) much of it involves parents taking their kids to Cinderella or A Rockin’ Mother Goose and sitting in the audience reading their cellphone messages, maybe looking up to cheer Little Susie in her one big number.

What Theatre Lab has done, especially in its Heckscher Theatre for Families productions, is mount a theatrical production that is meant to enrapture young theatergoers often seeing theater for the first time, but also liberally peppered with jokes, asides and other humor that only the adults will understand.

Additionally, there is an Aesop Fables’ message in these shows that kids will pick up on because Disney has drowned them with empowerment and self-reliance themes in every animated film for the past 35 years.

But in these titles, messages resonate more deeply with those for whom age has chastened with experience, wisdom and tough lessons – and gives them something to compare: how they reacted to such ideas as children and whether they did anything with them during the rest of their lives.

So Allison Gregory’s Red Riding Hood is a delightful hoot from the get-go for all ages of patrons. Wolfgang, a classically imposing egocentric Actor with a capital A, proposes to the audience putting on the fairy tale with him playing all the parts. As a cheerleader for the wolf, he wants to cut the story down to the single scene where the wolf eats Grandma. And that would be the end of the story.

He begins intoning in a mellifluous voice, inhabiting a melodrama-like stage complete with clamshell footlights, and dressed in a gorgeous brocade-encrusted Edwardian suit.

Suddenly, he is interrupted by a young woman in shorts and polo shirt employed by a FedEX/UPS-like delivery service, referring to a 2022 handheld tracking device and seeking to deliver an urgent small package.

The play joyously makes fun of theater niceties, beginning with immediately scrapping the fourth wall to interact with the audience young and old.

Eventually both of them end up playing Red, the Wolf, Grandma and the Woodcutter.  They jump in and out of the old lady’s bed, produce props no one will expect, and end up in a classic stage trunk doubling as the Wolf’s belly after he has eaten both Red and Grandma.

There’s plenty of manic action, puns, even an extended series of delightfully silly knock-knock jokes. But also there are asides including one about the theater being a non-profit 501c3 and a question whether there is such a thing as a vegetarian wolf.

Gregory celebrates imagination as Delivery Person tells the objecting Wolfgang, “How do you think this story came about in the first place? People made it up! People from Africa, Asia, Europe, America. Did you know the earliest known printed version of Red Riding Hood came from French folktales, more than four-hundred years ago? With every telling there’s a new twist, a different ending. There’s one version where the Woodcutter cuts open the sleeping wolf to get Grandma out and then Red fills his belly with stones and Wolf falls in the river….”

None of this would work without the inspired talents of veteran actor and clown (literally a clown) Troy Davidson as Wolfgang, BFA student Dayana Morales and the imaginative direction of Matt Stabile. The three of them generate enough warmth, humor and electricity to power wherever this hurricane hits. Add in the live and taped music by multi-talented composer-performer Paul Curtis who provides literal grace notes and rimshots that comment on the action with accordion, cello and drums.

Davidson, who has done straight dramatic roles over the past decades including Othello, indeed is a veteran of children’s theater such as shows with the old Miami Theater Center in Miami Shores. He is also a supervisor of the South Florida division of Healthy Humor Inc., which provides clown visits to children’s hospitals across the region.

We mention this because his physicality, his facial expressions, his expressive voice and his endless reserve of clown-like humor are delightfully overblown as they should be for Wolfgang.

Morales is a promising find who also dives completely into the character of this modern young woman with a plucky spirit and an independent mind.

As fine director as Stabile is with drama, he has a clear affection and respect for this genre and invests it with just as much attention to detail as he would if it was Medea.

Gregory is an acclaimed and much produced playwright, not just for these family shows but for memorable “adult” titles such as Motherland, the urban set riff on Brecht’s Mother Courage and Her Children, produced here in 2017 starring Karen Stephens.

So what is the underlying message? Truth be told, it really feels artificially inserted into this piece and seems tough to see how it connects to the rest of the play.

Most of it is encapsulated in a couple of songs that show up about two-thirds of the way through the 80-minute show. But they are the most telling thing for the adults in the audience.

They are sung by Red regretting she had not listened carefully to her dead Grandma’s stories of her past. The lyrics will go right past the kids’ heads, but will settle inside their parents’ ears, especially if they have recently lost their own parents.

“I WAS TOO BUSY BEING A KID
DIDN’T LISTEN TO YOUR MEMORIES
YOUR STORIES WENT ON TOO LONG
NOW I WISH YOU’D TELL ME
HOW THE WORLD WAS DIFFERENT THEN.”

What this has to do with Red Riding Hood or even this version went past me. But it was a lovely touching moment.

Overall, it’s an hour or so of charm and chuckles for more than just the kids.

Red Riding Hood runs through Oct. 9 from Theatre Lab, performed at the FAU campus in Boca Raton.  Performance times are 2 p.m. and 6 p.m  Saturday, 3 p.m. Sunday.  Running time is 80 minutes with no intermission. $25 for adults.  Up to four children tickets (under 18) free with adult admission. For more information and tickets, log onto https://fauevents.universitytickets.com. Or call (561) 297-6124