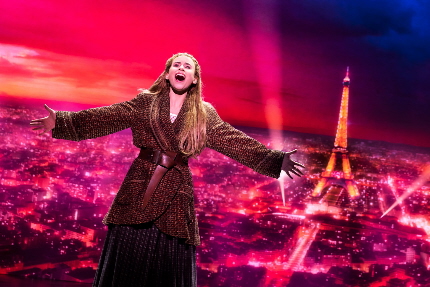 There was a time when national tours of Broadway musicals were noticeably cut-down versions of the original, partly to save money, partly because the physical production had to move from town to town, sometimes having just unpacked.

But in recent years, while producers and designers have found subtle ways to slim down the overall effort, it can be hard to tell. Broadway Across America’s current sit-down of Anastasia at the Broward Center seems as visually and aurally stunning as the 2017 Broadway edition.

But neither the opulent costumes, swirling choreography, endlessly morphing lighting, the full-throated orchestra, cast with mostly solid voices nor the inventive staging qualifies as the star. Neither does the score by A-listers Stephen Flaherty and Lynn Ahrens, nor the book by the legendary playwright Terrence McNally.

It takes nothing away from any of those virtues to acknowledge is that the star of the show – and this is meant with awe not derision – are the LED projections by Aaron Rhyne, likely done in concert with all the aforementioned talents including Scenic Designer Alexander Dodge and Lighting Designer Donald Holder.

Seriously. These projections are not simply beautifully designed, incredibly detailed photorealistic backdrops, but deeply integrated into the almost cinematic forward motion of the show as it moved steadily through a score of scenes. A Paris garret turns in the heroine’s dreams back into a memory of her childhood where ghostly figures waltz in a ballroom. In theater, scenery slides in and off. Rhyne also has new “scenery” slide in on top of the last scene. Curtains dropping to enhance a scene are not cloth, but Rhyne’s work. And while you know they are projections, they are so detailed and precise that you often wonder if indeed they aren’t three-dimensional set pieces. It’s all as fluid as a dreamstate and as beautiful as a high def screensaver.

Perhaps his tour de force occurs when our heroes escape to Paris by train and a lengthy scene occurs on a railway car that swivels every which way. But as the car turns, so does the point of view for the background scenery.

Anastasia is a significant surprise because its origins as a 1997 animated movie would be enough on the surface to dissuade ticket purchases from most adults who don’t have a little princess in tow.

A clue to its success for audiences of all ages can be divined from the proven skill of its creative team: McNally, Stephen Flaherty, Lynn Ahrens, and directed by the inventive Darko Tresnjak. The first three worked together on Ragtime, and the fourth who directed A Gentleman’s Guide to Love & Murder.

This work has no such pretensions or aspirations. The plot is a riff on the familiar legend of how an amnesiac in St. Petersburg is groomed by a handsome con man to claim wealth and power by posing as Anastasia, supposedly the only survivor when the Russian royalty was executed at the start of the Revolution. Amid a burgeoning romance, the possibility arises that this waif is indeed the Grand Duchess – the basis of a play and a subsequent 1956 film with Ingrid Bergman, Yul Brynner and Helen Hayes.

The beautiful animated film also had music by Flaherty and Ahrens and indeed aimed for a younger demographic, but they have expanded it significantly and benefited from McNally’s narrative expertise. The story is still one of Disneyfied self-empowerment and all the other 21st Century politically correct verities, but it’s told with wit and heart and a minimum of diabetes-inducing saccharine.

It’s the rarity: a genuine family musical that will entertain children but not bore adults because it is peppered with some serious undercurrents. Gone are the talking bat and the moustache-twirling villain Rasputin and the black magic climax.

The cast has breathtaking voices to deliver the soaring score, notably Lila Coogan as the spunky yet vulnerable heroine Anya (and who is more realistic than her predecessors in the role) and Stephen Brower as the ridiculously handsome hero Dmitry. The antagonist Gleb, a true believer in a new Socialist order, is Jason Michael Evans who does a fair job with a thankless part.  Tari Kelly is suitably funny in the comedy role of the Dowager’s lady in waiting Countess Lily. Edward Staudenmayer, with his facile features and gorgeously sonorous baritone, is Dmitry’s fellow con man, Vlad (some may remember him playing the White Rabbit opposite Miami’s Janet Dacal in Wonderland).

There are certainly enough peppy tunes and power ballads to keep the kids enthralled, but on tour the piece’s cartoon roots don’t show through as frequently as they did on Broadway.

But the show has a quiet dark side. A pall of poverty and injustice in the streets in the early scenes contrasts with elegance and opulence of Czar Nicholas’ court balls. The revolutionary Gleb must struggle with the dangers of self-delusion when pursuing a violent and radical cause. To that end, the lyrics may not be as trenchant as those for Ragtime, but they explore the yearning for a lost past as people must move forward to the future.

Anastasia runs through May 5 at the Broward Center for the Performing Arts, 201 SW Fifth Avenue, Fort Lauderdale, as part of the Broadway Across America series. Performances are 8 p.m. Tuesdays-Saturdays, 2 p.m. Saturday and Wednesday, 1 and 6:30 p.m. Sunday (no Sunday evening on the 5th) Runs 2 hours 40 minutes including one intermission

This entry was posted in Performances, Reviews and tagged Anastasia, Broadway Across America, Broward Center for the Performing Arts. Bookmark the permalink.