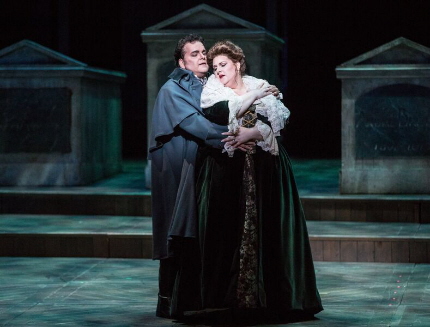 Most artists strive to hide “how” something is being achieved. Even the most surreal, non-representational and artificially theatrical endeavors desire the audience to get lost in the overall experience.

But often, opera is all about technique, spotlighting it, honoring it, celebrating it. So when Florida Grand Opera took on one of the most demanding works in the entire canon, Verdi’s A Masked Ball, it wisely hired accomplished singers whose polished skills are as dazzling by themselves as watching Olympic figure skaters.

If this overheated soapy love triangle is too melodramatic to be credible (despite the principals actually acting passions rather than just singing them) and if the staging of the first two of three acts is pedestrian, the opportunity to hear this cast embrace and elevate Verdi’s melodic score is well worth the experience.

In one of the standout performances of FGO’s season, Tamara Wilson in her local debut as Amelia may not look much like a dewy svelte object of two men’s fatal obsessions. But the beauty of her voice seduced and hypnotized an entire audience at the Arsht Center as she scaled her entire soprano range with a deceptive effortlessness, but more importantly with an expressiveness that wrung emotion out of every exchange with another character, let alone nailed her thrilling arias.

A Masked Ball (Un ballo in maschera), extrapolated so closely on an actual political assassination that censors required Verdi to change his locale, tells of the liberal King Gustavo of Sweden who falls insanely in love with Amelia, the wife of his best friend and closest counselor, Count Anckarstrom. When the count discovers the two in a late-night but chaste cemetery tryst, he joins a group of murderously reactionary nobles and – 150-year-old spoiler alert – to kill Gustavo at a masked ball. But Gustavo forgives everyone and proclaims Amelia’s innocence in the six minutes it takes him to die on stage (Hamlet took much longer to expire).

Wilson has a precisely controlled clarion instrument, but power also marks the bravura singing of tenor Rafael Davila as Gustavo in this season closer, who opened the season as Don Jose in Carmen. He was especially impressive in his second act love duet with Amelia; together they created a tornadic swirl of sound.

Director Marco Pelle is no stranger to opera, but his forte is staging ballets. As a result, two thirds of the opera is stodgily and predictably staged with singers mostly facing forward to the audience to stand and deliver, or wandering around the stage not looking at who they are singing to. It is only in the third act that the characters interact and relate to each other. Over the decades, more and more traditional theater directors like Harold Prince and Bartlett Sher have taken on opera and you long to see in Florida what they would do to enliven the dramatic, affecting and even visual elements of local opera.

No such complaint can be leveled at FGO’s principal conductor Ramon Tebar whose animated exuberance on the stand is equaled by the superb musicianship of his orchestra which encompasses delicate pizzicato from the strings to a thunderous storm from the brass and kettledrums.

The visual production rented from the Utah Opera is sumptuous in its costumes and appropriately eerie in the setting and lights.

This entry was posted in Performances, Reviews and tagged Florida Grand Opera. Bookmark the permalink.