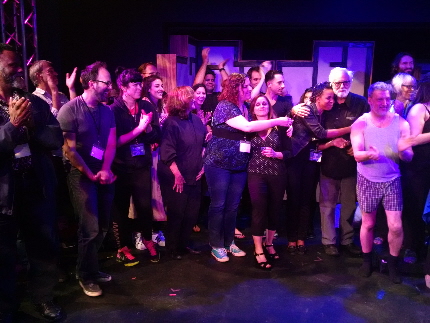 A worn-out Hillary Clinton balked at putting on makeup before her first major address since the election. Actors auditioning for an avant-garde Dr. Pepper TV commercial drank the soda out of a cereal bowl. An alien queen who owns a pop-up bar came to claim its dead lounge singer. One play ends when the cast rebels at the lame ending supplied by the playwright,

You know, just your average run of the mill premises on display in eight plays presented Monday in the one-night-only 24-Hour Theatre Project now sponsored by Theatre Lab, the professional company at Florida Atlantic University.

Ten years ago, Naked Stage co-founders Katherine and Antonio Amadeo created the local version of a national event: Local playwrights, actors, directors and technicians volunteer to unite during a 24-hour period to write, rehearse and perform plays no longer than 10 minutes or so for a paying audience. The event has become a highlight of the South Florida theater season featuring unrestrained absurd and anarchic presentations.

Some plays work better than others, some are polished and inventive, some collapse into a mess, but a feeling of camaraderie and hilarity carries the evening. The project raises money, especially since most participants and the host venue donated their services. But the entertainment/artistic results aside, the joyous, raucous and somewhat crazed effort is emblematic of and strengthens the ties among local theater professionals.

Some of this year’s proceeds will support a new play festival at the FAU-based company on May 10-14; some will support the Lab’s intern program, which has the unique philosophy that interns should be paid,

As usual, the playwrights and directors gathered Sunday evening about 6 p.m. when writers were assigned directors and casts at random and the writers chose from nonsensical titles. They then worked through the night composing plays – usually from scratch.

At 6:30 a.m. Monday, the casts, directors and technical staff began rehearsals, accumulating props and costumes, and accommodated on-the-fly adjustments to the scripts – all with an eye toward a 7 p.m. curtain.

Unlike most years, all of the actors had most of their lines memorized, although one skit – a musical performed to a digital soundtrack – found the cast flailing around for the lyrics, which was all the funnier.

The evening also gives local theater artists opportunities to expand their profile. Some of the directors and playwrights are better known to the public as actors, although they have had experience in those other offstage roles.

The Amadeos, who are moving to Colorado this summer, gave Theatre Lab their blessing to carry on their tradition. Antonio Amadeo was present Monday night.

This entry was posted in News and tagged 24-Hour Theatre Project, Theatre Lab at Florida Atlantic University. Bookmark the permalink.