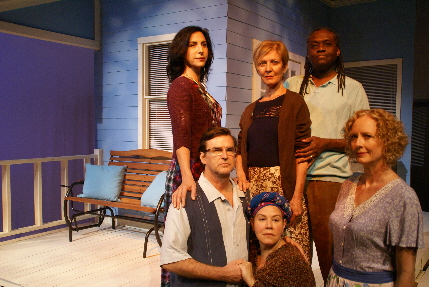 By Bill Hirschman
The reward for mounting and seeing new work in the 21st Century paradigm of play development is being in on the genesis of art in the early stages of its creation.

The price tag is the same.

Susan J. Westfall’s Two Weekends and a Day at New Theatre is a classic example of a world premiere that has admirable virtues worth exploring further, but a serious need for more re-tooling.

On one hand, the veteran local theater hand lays out a dozen insightful observations about the essential epoxy that shared history provides for folks in late middle-age, both in friendships and marriages. Westfall creates scores of moments that resonate deeply with audience members whose decades-long alliances get them through emotional crises and the encroaching specter of mortality.

On the other, the work is far too long, exposition is dropped off by the truckload and some plot developments would only be credible in a daytime soap opera. It needs another rewrite to be a compelling and moving evening, which is common in today’s playwriting model when producers and writers do not expect works to debut fully-formed like Death of a Salesman. The potential is there.

Faced with such challenges, director Ricky J. Martinez and the diligent cast of New Theatre regulars work hard, prevailing some of the time, but not always.

Westfall has written many other works and is best known as the co-founder, literary director and co-producer of City Theatre’s Summer Shorts Festival.

The play opens at a beach house where Melinda and Jonathan (Barbara Sloan and R. Kent Wilson) are prepping their annual Labor Day cookout for the arrival of Jonathan’s childhood friend and college buddy Billy (Clinton Archambault).

Melinda and Jonathan are less than pleased at the imminent visit because Gina, Billy’s wife and the fourth member of this very close group, died of cancer two years earlier – and Billy is bringing along his new younger girlfriend Rebecca (Susie Kreitman Taylor). The tensions are aggravated by the fact that Melinda and Billy always had a serious attraction for each other, and… well, you can guess.

The other weekend of the title is set 2 ½ years earlier at Billy and Gina’s woodsy retreat as Melinda visits an ebullient Gina (Evelyn Perez) who has abandoned failing traditional treatments in favor of a new age regimen that includes drinking a foul unspecified liquid and bouncing on a trampoline at great length. Gina’s new medical guru (Kim Ostrenko) drops in and hits up Melinda for a grant because Melinda is the reluctant administrator of a family foundation. Melinda is angry with her lifelong friend because she feels Gina is wasting her precious time.

Jonathan’s a placid-seeming middle school teacher with a talent for sidestepping conflict. Melinda has a perpetually acerbic and cynical outlook; she says, “Lots of books have unhappy endings. I know because I read the last page first.” They have the comfortable banter and relationship maneuvers of people who have lived together 35 years.

When Billy arrives, we find he is an affable scruffy college professor. Even though he extolls the joy of having found revitalizing true love once again in a “child” of 42, he seems adrift with unfinished business.

Billy reveres Gina’s memory but he says he has moved on from the death of Gina; his friends acknowledge that they have not. That’s understandable to Boomers and their younger siblings: Memories and long-term relationships are crucial self-validation. So long as more than one person remembers them, they have worth, weight and, as Westfall proves, efficacy.

“Becca, not Becky” is simultaneously intelligent and uncomfortable, seemingly self-assured yet vulnerable. Gina proves later to be a creative mind joyfully bouncing through her final months with an optimism that is more life-affirming than Melinda’s pessimism.

The two times alternate back and forth as secrets are revealed, betrayals occur and people who love each other tell each other a lot of hard truths. A lot of blood flows over the dam and while the final scene is, indeed, the point of Westfall’s entire play, it doesn’t quite land as believably as it might.

The exposition situation is especially problematic. This play is about the importance of shared experiences that most of the characters lived together, but which the audience doesn’t know. So the playwright has to get that information across somehow. But while the information is feathered in occasionally in a line of dialogue or depicted in flashbacks already described in a previous scene, it’s mostly dumped off in relating stories. Over and over and over, characters tell each other what they already know. In fact, at least twice, a character tells long stories to another character and ends with words like, “but you already know that.”

The plays runs nearly 2 ½ hours including one intermission, but it need not have. For instance, there is a section in which the doctor defends alternative treatments. Dramaturgically, Westfall knew she had to explain enough of the debatable treatment to create a controversy between Gina and Melinda. But this scene allows the doctor to hold forth for several minutes on how society should keep an open mind. While we’ll bet a steak dinner that this topic is close to Westfall’s heart, all but a few crucial plot-centric lines could be cut without doing a shred of damage to the arc of the play.

Some situations are borderline ludicrous. Two people in the midst of long-delayed lovemaking stop their ardor to babble on, when they ought to have something else on their minds and mouths.

Stephen E. Davis created designs for the two homes with comfy porches, lit to represent various times of day by Eric Nelson and augmented by sound designer Anton Church. They persuasively establish seaside nights of the soul where anything can and does happen or at least get said.

New Theatre, which is kicking off its 30th season, should be honored for persevering as an incubator for new work. Two Weekends is the first of four world premiere’s its planning this season and it will feature several readings next month when it hosts a National New Play Network conference.