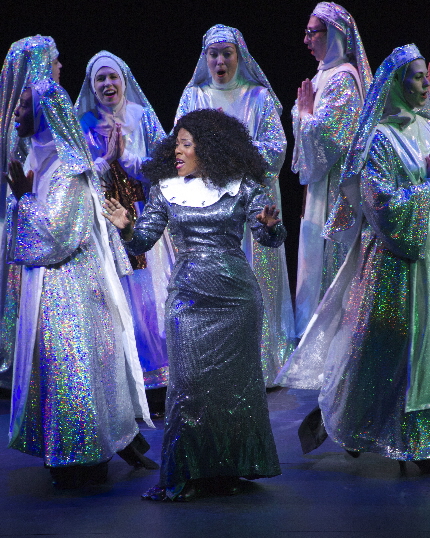 This critic has never been a big fan of the musical version of Sister Act because the material is so by-the-numbers constructed, so button-pushing manipulative, so mediocre – and because it’s also undeniably effective. You just can’t leave the theater without a warm bouncy feeling.

But the Wick Theatre’s resurrection of the 2011 show is so engaging, so energetic, so much pure fun that it has converted me. It’s still not a great musical, not even a good one and it’s not a title topping local patrons’ list of shows-I-am-dying-to-see.

And yet, I have no reservations recommending audiences wanting an entertaining holiday evening to catch this enthusiastic cast under Michael Ursua’s direction, Paul Reekie’s musical leadership and Shanna Sell’s choreography. With a script full of droll one-liners, a delightfully faux disco score and some rousing voices, it’s just this side of irresistible.

The original 1992 film was mildly amusing, but relied on the unique gifts of Whoopi Goldberg in her adorably irreverent fish-out-of-water mode. That was worked and reworked with an eye for the stage beginning in 2006 in multiple editions including a West End bow. It opened on Broadway in 2011 and lasted about 500 performances. It, too, benefited from a career-making performance by the emerging talent Patina Miller.

The bulk of the show is Deloris seducing the nuns into living a more joyful life via teaching them how to sing R&B-infused gospel. She turns them into a Las Vegas-style chorus line, performing for the Pope in sequined covered habits. Such nunsense.

The original script was written by Cheers veterans Cheri and Bill Steinkellner with a doctoring by Douglas Carter Beane responsible for the hilarious The Little Dog Laughed and musicals such as the revival of Cinderella. Without Beane’s injections, the script is comic book weak in its writing, and, frankly, even this cast can’t land the book scenes, which thud like amateur theater.

The result proves that somewhere in the bowels of Times Square lies a step-by-step cookbook for staging a Broadway musical. The power ballad goes here, the production number goes there, this cliché here, that cliché there. Every major role gets a character-revealing solo whether it’s necessary or not, whether it slows down the show or not.

A saving grace is that this entire cast knows how to nail the script’s humor. Deloris asks one nun if she is willing to labor to learn the new style of singing. “Are you afraid of hard work,” Deloris asks. The sister answers like Thelma Ritter, “I’m a nun. My life is like the stations of the cross — without the laughs.”

Or the Mother Superior admonishes Deloris back at the sanctuary after she takes two nuns to a bar next door: “If God does not strike down this place, he owes Sodom and Gommorah an apology

The staging is frequently two-dimensional with characters either standing dead still and/or lined up next to each other in a single plane. The penultimate scene is a sloppily-executed, half-baked Keystone Kops mess.

But then, thank goodness, this crew sings and dances with style and sass, and the show catapults to a different level that makes it nearly impossible not to clap along. Credit Reekie for melding these clarion voices into a smooth concoction and Ursua for getting them to put a bit of their own soul into each number.

Composer Alan Menken, whose credits are too long to cite besides Beauty and the Beast, is back in his strongest groove writing music that gently lampoons Top 40 radio as he did with Little Shop of Horrors. This time, it’s R&B, Motown, soul and disco with nods to the Four Tops and Barry White.  His lyricist is Glenn Slater whose nimble wry words here are much better than his work for The Little Mermaid or School of Rock.

In the spotlight as Deloris is Patrece Bloomfield, a central Floridian whose extensive vocal talents are perfectly matched to this array of genres from Aretha Franklin gospel to Donna Summer disco to Broadway ballad. Her acting is just passable, although the script doesn’t give her much to work with other than attitude covering a bit of vulnerability. But the wisdom of her casting is apparent when she is whipping up the nuns’ choir in “Raise Your Voice” or coming to a realization that she doesn’t have to depend on a man, and yet that she is not alone in the song “Sister Act.” 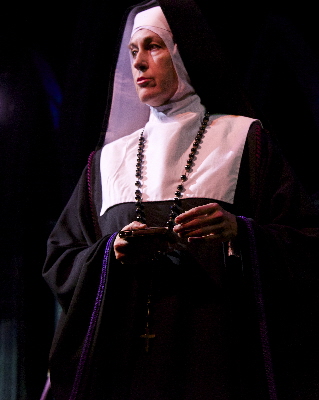 Danette Cuming conquers the tough role as the Mother Superior, melding firmness with affection for her flock. But Cuming, who has the strongest, purest voice in the cast, also invests a sense of anxiety that the Mother Superior’s beloved traditions are in danger of eroding. Until the finale, everyone gets to dance, but Cuming must touch the audience mostly standing stock still, relying only the expressiveness of her voice in such solos as “Haven’t Got A Prayer.”

Especially welcome is Jessica Brooke Sanford, home for the holidays during a break from trying to make it in New York. Sanford is dead perfect as the postulant Sister Mary Robert, the painfully shy nun who Deloris turns into a belting marvel. Sanford, who led Bonnie & Clyde for Slow Burn Theatre Company and was the teenager in Zoetic Stage’s Fear Up Harsh, is adorably reticent at first. But she believably transforms into a fully actualized adult under Deloris’ ministration, from her wistful power ballad “The Life I Never Led” through the glowing pure hallelujah of her curtain call.

Don Seward, the terrific Coalhouse Walker of Actors Playhouse’s Ragtime, brings that rich chocolate syrup baritone to the comical Motown love lament, “When I Find My Baby,” in which he sings, “Ain’t gonna let that girl get away! / No way! / And when I find that girl, / I’m gonna kill that girl! / I’m gonna wham! Bam! Blam! / And drill that girl! / Won’t rest until that girl is safe and sound six feet below!”

Backing him up like wayward Pips are his over the top macho henchmen Michael Cartwright, Pasqualino Beltempo and the hilarious Elijah Word who have their own number describing how they plan to seduce the nuns as a way of getting to Deloris.

Also deserving of mention are Andre Russell as the lovelorn cop, Leslie Wolfe as Sister Mary Lazarus, Michael Collins as an unusually fey monsignor and Margo Moreland as the ebullient Sister Mary Patrick.

The Wick has hired 27 performers and another 13 people working in other capacities, so anyone not otherwise working this holiday season is in this talented ensemble.

Few people will notice that Peter Barbieri Jr.’s set design (borrowed from last spring’s production at Vero Beach’s Riverside Theatre) is pretty Spartan because Thomas J. Shorrock’s lighting creates different atmospheres and helps focus the audience’s attention where Ursua wants it.  The costumes that Dustin Cross designed for a previous New Hampshire production are recycled here too, but they are hilarious including the increasingly glam iterations of the nun’s habits.

Last but not least, Sell’s choreography is an unadulterated hoot pulling into one place every disco-era move you’ve ever seen.

I’m still not convinced that any theater’s efforts might not be better invested in another show, but this is a revival that will raise your spirits if not the roof.