Becoming Truman Capote At Dramaworks: Rob Donohoe Transforms Himself Inside & Out 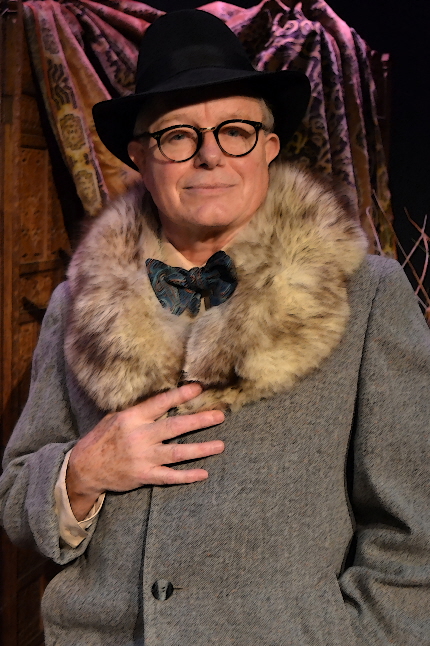 He’s taller, his hair is brown and full, his eyes are light blue and his voice is a warm baritone.

But over the past few months, he and director Lynette Barkley have been cataloguing the external facets of the public celebrity and the internal motivations of the tortured soul in preparation for the one-man drama Tru opening Dec. 2.

“No, I’ve never done impersonations. Sometimes when I’m telling a story, I’ll try to approximate somebody’s voice but I’ve never been a mimic,” said Donohoe, a mainstay of Dramaworks’ productions including his Carbonell-nominated turn last April as the reprobate father in Buried Child.

Barkley explained, “All that research Rob has done, at some point you have to let it go and just find the emotional life of the character and make it real and connect to it. (Then) people connect to this human being on stage and they can let go of that picture of Truman Capote that they have.”

Which is the challenge. Capote was a flamboyant charismatic creature who lived off of a created celebrity persona in the 1960s after achieving legitimate awe for his genius as a writer of such works as Breakfast at Tiffany’s and In Cold Blood. Virtually anyone over the age of 50 has a mental and aural image of the short effeminate opinionated uncensored being with a witty and vicious tongue. Recreating him on stage is not like portraying someone they audience has never known, like, say, Alexander Hamilton.

The process has been a multi-stage journey. It started about a year ago when Dramaworks Producing Artistic Director William Hayes asked Donohoe to consider the role. “I read the script and I had seen the play before and… I said, well, I really have to think about it because I’m taller than Truman was, can I do the voice, and the whole thing.”

He started looking at You Tube videos of Capote; there are many because of his frequent appearance on talk shows. “And then I decided; how often is a producer going to give me this kind of chance?”

He started with research including Gerald Clarke’s biography, building up a storehouse of knowledge that would help him immerse himself on stage. “As an actor, I’ve always found it helpful to go back and create a childhood, figuring out where they came from, because our personalities are so much a part of where we started, how we were treated, what happened to us in high school, and it informs do many things later on in life, and we’re just blessed that we have all this information about Capote.”

There was a bit of serendipity; he lives in Brooklyn Heights two blocks from a house in which Capote rented the basement floor. A few years ago, Donohoe, who is also a real estate broker, heard there was a free lunch at an open house viewing of the home, “so I thought why not. So I’ve stood on that porch. I’ve stood on that stairwell.”

Barkley quipped, “There are no coincidences; that was premonition.”

In May or June, he began memorizing Jay Presson Allen’s 1989 script, which is set over two days in Capote’s New York City apartment the week before Christmas 1975. An excerpt from his unfinished novel Answered Prayers has been published in Esquire, alienating close friends such as socialites Babe Paley and Slim Keith satirized in the piece. Feeling abandoned and lonely, Capote immerses himself in booze and drugs while he reminisces about his past.

Then Donohoe immersed himself in video interviews with Dick Cavett and David Frost, cameos in films like Murder By Death. “These were all opportunities to hear him. He narrates the beginning of the TV movie A Christmas Memory. So I went to all those of sources of him just talking as opposed to reading.”

As concerned as he was about the voice, something fascinating came clear as he watched the real Capote side by side with acclaimed film portraits by Phillip Seymour Hoffman and Toby Jones, as well as recalling Robert Morse, the original actor in the Broadway and touring productions of Tru: None of them sounded identical to Capote. They caught the flavor and cadences, but none of them was a photocopy impersonation.  Donohoe started working on the voice, partly with a vocal coach.

Sitting in the rehearsal hall this day, he describes each facet, taking each one into his own voice. “It’s mostly they remember he had a high voice.” Donohoe gooses his timbre as he speaks the words. “And it was slightly nasal.” Donohoe adds that quality. “He has an under bite and a lazy tongue, so that causes the lisp.  And then he had a higher voice, that was just the way he was born, plus he was Southern, so he had a slight accent and he tends to draw things out a bit.” Donohoe adds those elements. “And so you just keep adding those layers and you get an approximation of where his voice came from.”

Suddenly in the room, there is a credible representation of Capote’s distinctive sound.

But there are the visual demands as well. Donohoe was planning that week to get his hair dyed and cut to approximate Capote’s receding hairline.

Finding Capote’s physical movements is difficult because most videos show him sitting, but Donohoe has been working on the hand gestures. “One interview where he was obviously under the influence of drugs or alcohol, he did a lot gestures on his face. I’ve picked that up. He ran his finger along the bottom of eye socket.” Donohoe wipes the back of his hand across his forehead to illustrate another Capote mannerism. “It was sort of a nervous gesture …and it’s a slightly effeminate thing but also a self-protective thing. And I read in George Plimpton’s book, somebody said that whenever he was lying, you could tell, because he would look up. All those body language things, I’m trying to find places to integrate those as I go.”

Barkley, whose Dramaworks’ credits include Les Liaisons Dangereuses, added, “You have to find those moments when it’s organic and not just put on. You can’t just do an effeminate gesture just to do the gesture. It has to come out of the moment.”

So piece by piece, the two construct Capote in layers, blocking the movements, trying to find the precise persona. “Lynette keeps telling me, ‘No, wait, stop, you’re too macho, which I never thought of myself as macho, but thank you. But it’s hard to embrace that feminine thing because we look at it and go ‘Oh, that’s faggy or swishy’ all those negative things we’ve always been told, and finding ways to embrace those without looking ridiculous.”

Donohoe, a working actor for decades, rates this as one his toughest challenges.
“For me, this is the first one-man show I’ve ever done. So at the age of 66 I’m sitting down and memorizing 45 pages of dialogue. People always say, ‘How you do that?’ For me, that’s the easy part…. It’s interpreting them and acting them eight shows a week and trying to be spontaneous and real.”

The key to keeping it real is discovering the person inside the celebrity. Barkley remarked, “For me, it was finding his vulnerability. When you see his childhood — his mother abandoned him when he was four years old, his father left, he was sent to live with relatives, sent to military school, always being told as a child that he was weird, that he was a freak, because he was different — he spent his childhood not feeling loved, being abandoned, not getting attention, not being appreciated or acknowledged for who he is and it makes him so vulnerable.”

She rolled on, “As an adult, you never lose those things. He’s created a persona to… he has almost made himself affected so that nobody accepted him. He was so ‘let’s make it even bigger.’ But those demons don’t go away, and for me, that makes him so vulnerable, and it’s in this play…  those demons keep coming out, telling him you’re not good enough, nobody loves you, you’re a freak. How dealt with those demons was sometimes alcohol and drugs.”

What Donohoe wants is for people to know the true Tru.

“I think most people of my generation remember him as a drunk alcoholic talk show host who made a fool of himself and died early. He was an actually a phenomenal writer; he’s considered one of the greatest American writers we’ve ever had…. The legacy that he left there was so much more than that drunk alcoholic pill popper that we all seem to have come to know.”

He smiled and said quietly, “It’s been a real lesson for me to delve deeper to find out who this person was — as a gay person early on in the ’50s being very open and not afraid to be who he was and say what he thought and be artistic and succeed with the odds so much against him. It’s inspiring. But it’s also in a lesson in what can happen if you don’t have as firm base. “