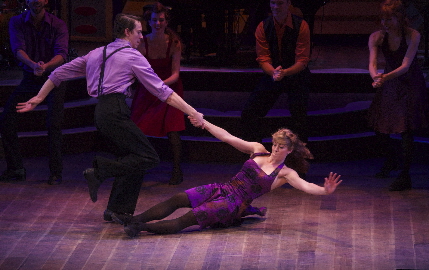 This is why they call it Swing. / Photos by Amy Pasquantonio

Bodies seem to fly through the air and end up in a plethora of entwined positions worthy of a terpsichorean Kama Sutra in The Wick Theatre’s thrilling musical revue Swing.

Savor the soaring voices, most steps found in the dance catalog plus some you’ve not seen, a kick-butt octet of musicians who sound like time travelers from the Big Band Era and a gross of carefully coordinated costumes paraded across a beautifully lit Art Deco set.

And indulge yourself in one of the most energetic and uniformly talented dance corps we’ve seen down here in many a year.

This will spoil South Florida audiences for years to come as to what a musical revue should be. You don’t even have to like this kind of show or this music to be carried away by the enthusiasm and imagination.

Many companies wisely turn to cabaret revues as a cost-effective way of providing satisfying mainstream entertainment, especially for an older crowd. But in its second season opener, the Wick has doubled down its first season bet by hiring a crew of Florida and imported talent who bring a level of skill that is noticeably a cut above what you normally see in this genre.

Much of the success is due to musical director Paul Reekie (a vet of shows for Arts Garage and Palm Beach Dramaworks) and, even more so, to recent Miami transplant Kelly Shook (in The Wick’s White Christmas) whose choreography and direction is as imaginative and varied as can be conceived. The penny-bright polish, precision and verve that these two have imposed elevates this celebration of music and movement from jitterbugging to country line-dancing.

Swing is a 2000 Tony-nominated paean look at the Big Band Era through three dozen standards delivered by 14 singer-dancers. The evening originally conceived by Paul Kelly has no overarching plot or dialogue although many of the dance numbers tell a self-contained story in the abstract way that Gene Kelly film numbers used to.

But there is nothing stale, no simple appeals to the audience solely through hazy nostalgia. Vitality pulses through the evening.

A few photos to paste in the scrapbook:

The lovely Lindsay Bell and knife-sharp Charles South are paired off in some of most outstanding moments of the show, but never better than in an elegant delicate pas de deux that melds en pointe ballet with modern dance in “I’ll Be Seeing You.”

Phillip Attmore and local stalwart Christopher George Patterson leading the group in a percussive tap to Charlie Parker’s “Bill’s Bounce” that threatens to break to the floorboards of the stage.

The rail-thin Ashley Klinger in several numbers in which she does splits, leg extensions and just movements with her limbs that seem impossible.

Although they dance a bit, much of the singing is carried by the solid baritone of Michael Ursua, a frequent musical director at The Wick, and Alix Paige, a Florida native who has returned for shows at Arts Garage and Palm Beach Dramaworks, and who hits stratospheric notes here.

Both caress with these songs assurance, but they deliver a stunning extended showcase of impossibly nimble scat singing while portraying prickly lovers in Duke Ellington’s bebop “Bli-Blip.”

Every dancer can sing, but Shook and Reekie astutely identified Amelia Millar as having one of the loveliest voices in the entire troupe. She proves it with heartbreaking non-dancing renditions of Johnny Mercer’s “Skylark” and later “Cry Me A River.”

Every member of the cast gets moments to shine and they all deserve mention: Chris Brand, Andy Frank, Tommy Joscelyn, Mandy Modic, Amanda Torsilleri, and Casey Weems.

But the big news is that The Wick has hired a live band after saving money last season using digital music for all but the last show. The bright, full sound makes all the difference.

Each band member gets solos to shine in such as guitarist Phill Fest’s riff on the instrumental “Caravan” or trumpet player Douglas Michels backing up Attmore’s martini-smooth hip-hop funky riff on “Boogie Woogie Bugle Boy.”

Or Dave Wilkinson’s center stage bass turn when Klinger appears behind the instrument as disembodied hands caressing its wooden curves and then undulating to Wilkinson’s playing on “Harlem Nocturne.” Their bandmates include Julie Jacobs on drums, Glen Rovinelli and Tom McCormick on woodwinds.

But the most memorable moment of the entire evening is Jason Pyle’s expressive trombone in a musical conversation with Millar’s crooning “Cry Me A River.” (You’ll be humming this for an hour after the show ends).

Veteran local hand Sean McClelland is now The Wick’s resident set designer. For years, McClelland has created impressive environments for small theaters with virtually no budget such as his war-torn hell in Outré Theatre Company’s An Illiad. But now, with some money to work with, he has created a gorgeous period bandstand and jazz club under Art Deco arches, evocatively lit by Jose Santiago whose designs snap from one to the other on the opening beat of a segue.

The Wick is an off-shoot of founder Marilynn Wick’s Costume World and its adjacent museum, so it’s no surprise that the costumes here are peerless. But even if they have been pulled off a rack and altered, the selection by Kimberly Wick and Marianne Dominy illustrates what costume designers have said for years – that talent is required choosing precisely the right wardrobe to communicate a variety of characters and moods.

The sole gripe is that while the sound design itself by Peter Moran is fine, especially on the band, flashes of feedback erupted several times opening night. Plus, microphones either cut out or the person on the sound board was slow on the draw switching to whoever was singing. All that should be worked out in a day or two.

Heads snapping, limbs elevated at every angle, men flipping women around their backs like Hula Hoops, and expressions of pure joy suffusing everyone’s Pepsodent smiles. Swing is an unqualified delight.