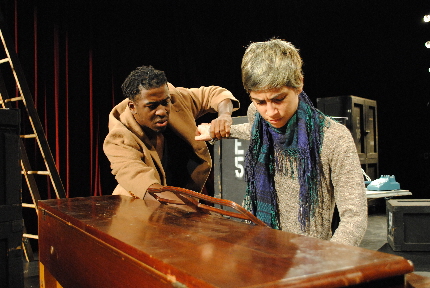 There’s a daringness to Stephanie Ansin’s vision – a fearlessness in her direction at Miami Theater Center that makes you find things to love about a piece, even one that ends up having more than a few problems.

As a continuation of her exploration of themes of isolation and entrapment (MTC’s Hedda Gabler and The Seven Year Itch), Ansin and company have chosen Tennessee Williams’ The Two Character Play.

The title of Out Cry was changed for the American premiere to The Two Character Play (the Chicago premiere was in 1971 and it opened in New York in 1973).

The two characters are Felice and Clare (Edson Jean and Shira Abergel), a brother and sister, who are also actors that have arrived at a theater where they will be performing in a play. However, in existentialist fashion, the pair have been abandoned by the rest of the troupe. They receive a telegram at one point explaining why they have been left – the company believe the two to be insane. There is still the need for the show to go on as the audience continues to arrive to see a performance.

Williams devises a play within a play, where the two characters are playing out a script about a brother and sister named Felice and Clare. These play siblings are struggling with fear and isolation of leaving their house after their father and mother have died inside the home. They face harassment from the town and feel protected behind a wall of sunflowers that cover the window of the home.

Ansin has placed the production on MTC’s large proscenium stage. While the interior play seems to take place in a different decade, actors Felice and Clare are present day. In Ansin’s Two Character version, multi-media creates the present action by using a series of video cameras, which resemble security cameras. Different cameras (1, 2, 3 and 4) take shots in various parts of the building (backstage, on stage, in a stairway, in the lobby) to unspool the action – the audience doesn’t see the actors live on stage for at least the first 30 minutes of the play, but watches them through the lens of the video camera. It’s highly inventive and the camera work does add to the theme of the play, which is meant to create a feeling of entrapment. The time stamp that ticks off heightens the urgency of the two present day characters who seem to be racing the clock.

The video cameras are in place for the real Felice and Clare. When the action turns to the play, we witness the action live on the stage. It is crafty. This is one of Williams’ most problematic plays. He forces the actors to struggle with characters that speak in overly poetic, long monologues. In the wide open space of the Miami Theater Center, the context is difficult to grasp.

Furthermore, the cavernous proscenium stage plays against the feeling of isolation. Everything is too spread out to create an intimacy between the audience and the two characters. I had expected that Ansin would continue the staging she used for Seven Year Itch and Hedda Gabler on which she placed both actors and audience on the stage to create a more confined setting. (She does however cut down the seating by having the left and right sections covered, which also serves to add a bit of eerie ambiance to the theater.) Nowhere would this have been more suitable than for this play. However, concessions would have to have been made for the video. What she was going for here was a menacing effect from the overly large black and white video that was quite intimidating in its scope.

Abergel and Jean are believable enough as modern-day brother and sister, but as throwbacks in a different decade, the transition isn’t smooth. They still maintain their contemporary statures (Abergel and Jean are younger actors for these roles), which only serves to render their words hollow about the fears they face as the brother and sister in the play. The choice of non-traditional casting, too, is bold (Jean is black and Abergel is white), but it also creates a disconnect, especially because the play is thought to have been Williams wrestling with his own demons inside the character of Felice. Two Character is Williams’ self-therapy, in some ways, in working out the almost incestuous love he had for his schizophrenic sister. This play has been, many times, thought of as a bookend to Menagerie, but there’s no glimmer of that here.

Williams has built much insanity into his script, almost lost here except for the surface reading of the mania. In its purest form, The Two Character Play should leave the audience guessing as to whether anything they are witnessing is real (a hallmark of absurdist theater) or perhaps they have somehow found themselves in a voyeuristic situation watching two people play out some macabre mind game. Are the characters supposed to be representations of male and female? Are we watching two people confined to a mental institution? The audience should start to question this when Clare tells her brother that he’s been obsessed with locked doors since your stay at State Haven. But it’s lost here.

Fernando Calzadilla has created an appealing set with its beautiful red curtain and props that recall an old theater house. Calzadilla, Miami Theater Center’s resident artist, is also responsible for the costumes and lighting.

Kudos to Ansin for taking on this difficult piece and infusing it with an original freshness. She has, in fact, found something to make this extremely cerebral, absurd tragedy worth a look with her spying cameras, but the tragedy here is that, like the cameras, we are kept at a distance. Since the audience is never close enough to be fully enmeshed in the action, except when they are watching a giant video screen, there’s a different kind of isolation. The gift of theater is its ability to create a communal experience. MTC’s The Two Character Play unfortunately gets caught up in its own inaccessibility.

One Response to Williams’ ‘Two Character Play’ At MTC Uses Inventive Device, Yet Gets Lost In Isolation