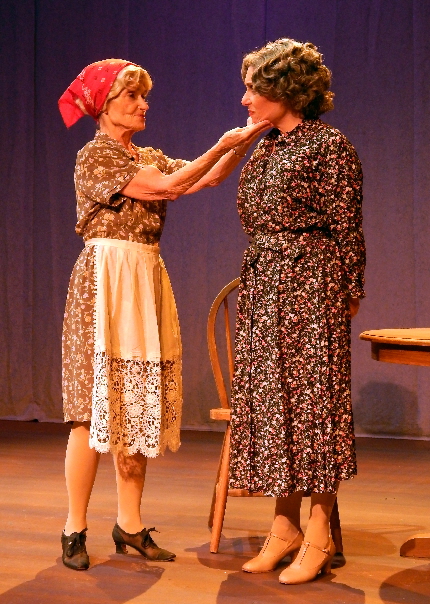 Cliches are clichés, or become clichés, for a reason. They are perfect expressions of a situation that can rarely be improved upon — only substituted with an inferior phrase.

In the 21st Century, we hide their overuse by rebranding them “tropes” or “memes,” but they’re still clichés, or well on their way to clichéhood.

From Door to Door, a bittersweet comedy retracing the evolution of Jewish-American womanhood through 65 years of the 20th Century, is a procession of clichés spread over 80 minutes. But if the current production at Broward Stage Door doesn’t have much vibrancy or energy, it admirably underscores that beneath tropes lies truth.

The title is a pun on the Hebrew verse “L’Dor V’Dor,” which translates to “from generation to generation,” a perfect restatement of this play’s journey as actresses play three generations in a single Chicago area family from 1936 to 1999. Each woman in the chain echoes and differs from her predecessors as society gives each increasingly more independence.

At its center is Mary, trapped throughout her life between the traditional vision of a woman’s place in the home and her dreams of a more fulfilling life. As the years pass, she is bookended by her persistently pessimistic and paranoid shtetl refugee mother Bessie, who virtually orders her to curb her ambitions, and, much later, Mary’s daughter Deborah whose post-women’s liberation life acknowledges no limits and is an unintentional rebuke. The arc of sociological changes are clearly limned: Bessie squashes teenage Mary’s hopes of a career as an artist, but a half-century later Bessie is inordinately proud of Deborah’s success as an illustrator-writer.

The women joust over everything from dealing with infidelity to the onset of “women’s lib.” Bessie purveys self-denying folk homilies like “Jewish girls should be like stars: shine by night and disappear by day” or when Mary balks at a loveless match, Bessie says, “You get married and then you fall in love…. It’s just as easy to fall in love with a rich man as a poor man.” Sometimes Bessie’s vision seems like a visit to an archeological dig of gender sociology.

The play is rife with recognizable interpersonal strife, especially when each daughter becomes a caregiver to her mother. The legacy is clear. For instance, Bessie uses passive-aggressive phrases that rankle young Mary such as, “If I’m wrong, I’m wrong” when you know full well she doesn’t think she’s wrong. But later Mary uses the same phrase in negotiating with Deborah.

The sustaining importance of religion and its culture ebb and flow as the women schmooze about assimilation, whether to marry outside the faith and whether to have had a bat mitzvah. The three adult women bond late in the play by singing a Yiddish folk tune they shared decades earlier.

Theoretically, these universal relationships should transcend a specific culture, but it will resonate most strongly with Jews. Judaism places a special emphasis on each generation’s connection to its forebears reaching back to Moses. For instance, the Passover Seder service tells the story of the Exodus as happening specifically to “us” not to people in an ancient time.

Playwright James Sherman, best known for Beau Jeste and The God of Isaac, leavens the heady interrelationships with plenty of archly witty banter among the three kvetching and kibitzing in each others’ lives. But there is an overall sense of stereotypes reenacting what we already know.

There are a few surprises in which people we thought we has sussed out reveal hidden depths. The most telling is when Bessie is seeming arbitrarily crotchety and impossible-to-please after seeing a production of Fiddler on the Roof. But Sherman gives her the best speech in the play as Bessie rages for the first time as she recalls the reality of the murderous Cossack raids and the far-from-inspiring exodus from Eastern Europe to America. She says bitterly, “They got it wrong. When we left they didn’t play music.”

Fern Katz nails Bessie’s pragmatism forged in tragedies. Elli Murray, who deftly reflects the five-decade aging of Mary, does much of the heavy lifting as someone who sacrifices much to Bessie’s prescriptive restrictions. Marah Lieberman’s Deborah stands in for the latest generation who benefited from the freedom fought for in previous decades.

Under the direction of Michael Leeds, the three actresses are adequate (Katz is Murray’s real life mother) although very little electricity crackles from the stage, which would help the evening considerably. It doesn’t help that focal point Mary is a submissive victim for a third of the show, slow to take advantage of opportunities for the second third, and then mostly regretful at the underlived life in the third. It’s accurate, but not dramatically enthralling.

Instead, the Stage Door edition of this South Florida perennial opts for a mild warmth as it presents recognizable ideas and situations that audience members will embrace, much as the same patrons welcome revivals of musicals written before 1969.

Focusing on the characters, the physical production is spare: a wooden table and three chairs atop some rugs with Ardean Landuis’ lighting providing scene changes as Leeds slips the show seamlessly one into the other. Although someone is credited with prop design, 99 percent of the evening involves actresses pantomiming, such as the mimed kitchen chores skillfully made more real by Jose-Luis Ramos’ sound effects.

The changing year is projected at the back of the stage to keep the audience oriented, but it was wrong a few times at the matinee we saw: Fiddler On The Roof was not running with Zero Mostel in 1975 and soldiers were not returning from World War II in 1936.

From Door to Door is a mixed bag – too respectful to be exciting, but mildly entertaining in its resonances. The tropes may be tired, but they’re also true.