Posted on December 9, 2014 by Bill Hirschman 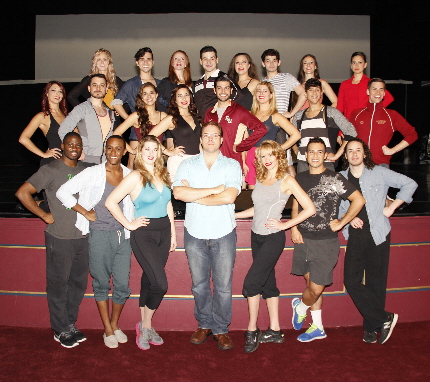 By Hap Erstein
Special to Florida Theater On Stage

For the first in-house production at the Delray Beach Center for the Arts’ Crest Theatre, a replica of Michael Bennett’s original staging and choreography for A Chorus Line, that reaction is exactly what director Kimberly Dawn Smith wanted to hear.

And with the cast of young professionals, several of whom are just out of school, mastering Bennett’s intricate dance steps is no small achievement. From the opening number, a non-stop cattle call audition designed to winnow out the wannabes, it is quickly clear that Smith has enough talented performers to deliver a thrilling, authentic Chorus Line.”

Smith is, after all, a veteran of the original Broadway production and one of only a few dancers entrusted to carry on the show’s traditions, directing over 40 productions worldwide. The problem — yes, there is a problem — is she has duplicated the staging so completely, unnervingly exact down to the performers’ stances and body language as they pose on that iconic white tape on the Crest Theatre stage, the show has absolutely no spontaneity.

Smith and company do an amazing job with this facsimile of what Bennett hath wrought, but the very idea of A Chorus Line is to showcase the personalities of these foot soldiers of the musical theater, not to mimic those who preceded them almost 40 years ago.

The Delray Beach Center for the Arts can be proud of this initial experiment in producing, but it is a lot of effort when similar work is probably available from any number of touring companies.

Anyway, if you have never seen A Chorus Line, this home-grown version with a cast consisting of almost entirely Floridians should satisfy. Group numbers such as “At the Ballet” and “Hello, Twelve, Hello, Thirteen” show off the company and Smith’s eye for detail well.

Of the individual performers who stand out, it is chiefly because they have the best material. Rebecca Jiminez scores as a chipper Hispanic gal with rueful memories of drama class and Christie Rohr impresses as a dancer who found success through plastic surgery. Courtney Arango looks a bit young to play Cassie but she conquers the grueling “Music and the Mirror” dance solo very capably and Brian Varela will probably get to you with his emotional soliloquy about his beginnings in the tawdry depths of show business. Shane Tanner plays the choreographer.

Technical credits are first-rate, particularly the lighting by production stage manager Mikel Gambuto. The Crest has the facility and talent to succeed with its own theater productions, and hopefully future shows will allow more original input by the company.

Oh, and one more, hardly insignificant quibble. As much as Smith is trying to be slavishly faithful to the original show, she chose to eliminate the character of tiny Asian dancer Connie Wong. Presumably Smith was unable to find an ethnically appropriate performer, but the omission is surely an infringement of the show’s copyright.

This entry was posted in Performances, Reviews and tagged A Chorus Line, Delray Beach Center for the Arts. Bookmark the permalink.