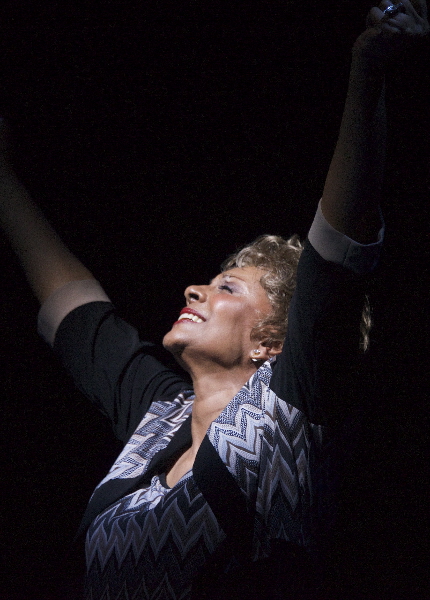 Whenever Leslie Uggams opens her mouth and lets loose that glorious voice, whenever the live band swings into one of Jerry Herman’s standards, whenever the dance ensemble starts hoofing, the Wick Theatre’s production of Mame is an irresistible pleasure producing uninhibited smiles in the audience.

But when the music stops, so does the show. The non-musical scenes – and some of the musical ones – just lie there on the stage limp and colorless. Moments of warmth and a cornucopia of witty zingers just fly past the performers and land with a thud. This is baffling: The scripts for both the musical and the original play are hilarious and touching.

Then, just as you’re ready to succumb to disappointment, veteran star Uggams brings that butterscotch voice to a tune, accented with those dark flashing eyes and that infectiously welcoming smile. And all is forgiven. Until the music stops again. It’s genuinely heartbreaking.

Mame is the 1966 musical that cemented Angela Lansbury’s stage reputation. It was based on a 1955 novel, then a 1956 play and a 1958 movie starring Rosalind Russell as the social butterfly and unconventional force of nature Mame Dennis who molds the life of her nephew, Patrick. The musical was made into a misbegotten film with Lucille Ball in 1974.

Uggams has said she may be the first actress who is primarily a singer who acts to take on the role in a major production, rather than comediennes who can sing (not counting Lucy who croaked not sang). She is also, she believes, the first African-American star to head a major production – more on that later.

The easy person to blame for the sluggish shortcomings is director-choreographer-stager Norb Joerder, but he did a superb job on last season’s 42nd Street and a decent job with Steel Magnolias at the Wick. Here, he clearly has not delivered the witty topspin and joie de vivre that define the soul of the show. The staging of the non-musical scenes is bland, predictable and unimaginative. Ninety-eight percent of the show (other than “If He Walked Intro My Life”) is played so far upstage that the audience feels distanced from the proceedings.

Much of the dancing ensemble is executing his choreography perfectly well, but compare it to the work many of these same people did in the Wick’s last show Swing.

Back to Ms. Uggams. Anyone who has a Tony Award for Hallelujah Baby and an Emmy nomination for Roots obviously knows how to act better than most. Her ability as a songstress not only remains undimmed but just deepens with experience.

But the sad truth is she is miscast. Ms. Uggams exudes a wonderful warmth, but she never puts across that blithe devil-take-the-hindmost spirit that Mame absolutely must radiate. This show needs a sparkplug, especially in the book scenes. She’s someone you’d love to have lunch with, not someone who would dazzle you into allowing your child to accompanying her on a trip to India.

Part of it, and it hurts to say this, is Ms. Uggams readily admits to being 71 years old. Mame must be able to kick up her heels literally and directly participate in the big production numbers like the title song and “That’s How Young I Feel” as opposed to being an observer. But Ms. Uggams physically is not up to much footwork.

On the other hand, when she glides forward to sing her signature song for decades, the 11 o’clock number “If He Walked Into My Life,” you have to marvel at the ease, the pure sound, the expert phrasing and the passion she effortlessly emanates.

As far as the racial issue: The problem is not the scene where Beau takes her to his Southern plantation to meet a family who still haven’t acknowledged Appomattox. It actually works as an added jibe when they see that Beau’s lady friend is not just a damn Yankee, but black.

The stumbling block pops up when she interacts with the snooty one percent parents of Patrick’s fiancée. They repeatedly boast of their neighborhood being “restricted.” In the 1950s that meant Jews and Catholics. Having a black neighbor was simply unimaginable. So having bigots look a beautiful black woman in the eye and enlist her help in keeping the area “restricted” takes a real leap in audience suspension of disbelief.

Musical Director Michael Ursua does a stand-out job with the cast as well as leading the eight-piece band.

Technically, everything is just adequate other than the costumes designed by Kimberly Wick, which obviously are first-rate. But, for instance, the set design by Eric Harriz is just barely passable; the main set doesn’t even have the essential winding staircase for the big entrances and the finale. There’s a new upgraded sound system, but the crew was still trying to adjust sound levels and timing on opening night. One actor was not heard clearly all night.

It’s too bad the show doesn’t have as much fizz as the champagne served on stage or sparkles like the dresses the star wears.

On the other hand, any chance to hear Leslie Uggams caress the Jerry Herman score may be well worth a ticket to many patrons.