Posted on December 3, 2018 by Bill Hirschman 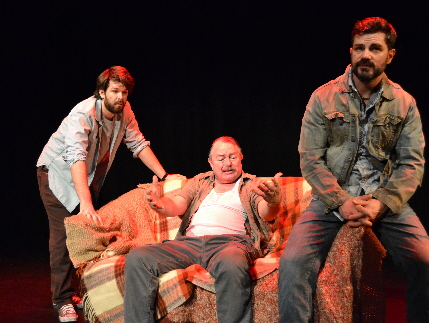 When a theater produces Death of a Salesman or My Fair Lady, it’s not unknown territory. The director can adopt, adapt or depart from what has been done before.

But when it’s a world premiere such as Palm Beach Dramaworks’ upcoming bow this week for Lyle Kessler’s House on Fire, there are no roadmaps other than the still evolving script about which even the playwright is making discoveries during rehearsal.

Director William Hayes says it’s a more exploratory, collaborative, intuitive, developed-on-the-fly process, even more so than when a director re-interprets a classic piece.

Kessler, a veteran theater educator, actor, director and producer as well as a playwright and screenwriter, is best known for his acclaimed 1983 drama Orphans. Like much of his work, House on Fire is a comedy drama with overtones of dysfunctional family, baseball analogies and magical realism.

The quick summation is the young man Colman returns to a working class home in Philadelphian after a self-imposed, decade-long absence. His brother, Dale, has passed on word that their father, known as the Old Man, has died.  Despite the presence of the body on stage, Colman is not convinced he’s actually gone. With good reason. The rough-hewn tough-to-live-with trio argues, fights and strives to make the most of a renewed chance to make something approximating redemption if not peace.

The play is the second, after last season’s Edgar & Emily, to be produced on the mainstage from the company’s Dramaworkshop program that solicits and develops new works. House on Fire was part of a blind submission competition about two years ago and has had one developmental reading in Los Angeles and some limited work inside Dramaworks’ program.

Once this kind of new work has been chosen, tweaked, altered, analyzed and discussed at great length with the playwright and designers, then casting begins. Hayes said he usually obsesses about casting, but “I don’t recall working on a piece where really the casting was absolutely so crucial to pulling it off.”

During two New York casting sessions, “I took the time to get to know their personalities because you need to know you’re going to click and they are going to be able to create characters who have never been portrayed before… I had to get a sense of their style and I needed them to get a sense of mine,” said Hayes, the company’s producing artistic director.

Perfection here was essential because Kessler’s “characters are on the edges of society, at the bottom of the food chain. They are rough around the edges, they have thorny exteriors and you have to cast actors that both bring a lot of layers and dimension to it and will show some vulnerability,” he said.

This was especially crucial in casting the crusty acerbic off-putting father with subtler dimensions, akin to Carroll O’Connor’s Archie Bunker. Hayes went with Rob Donohoe who has appeared in several Dramaworks productions including the reprobate of a father in Buried Child in 2015.

By this time in the process or shortly after, many directors have every moment, every emotion, every beat of the play worked out, including who moves where when. Hayes doesn’t work that way, least of all on a new work.

“As a young director, I worked at home and put everything in writing and everything was in stone. I’ve learned in my old age that you have to get the emotion first.”

In the early stages, he pays little or no attention to the stage directions in the script. Instead, “I pay a lot of attention to dialogue and what are you ultimately trying to accomplish in the scene. Because the playwright may envision the action, but it may not support it emotionally or through line of the scene….I make sure the playwright is open to that. I say, ‘I just want to know what you want to accomplish in this scene, what are we trying to do here and you need to give me freedom to explore what that means.’ “

In rehearsals, he keeps control as the person in charge of creating and maintaining an overarching vision. But the key is collaboration and a wide open mindset to the sudden emergence of unexpected ideas in table readings and rehearsals from actors and others.

For instance, they look for rhythms and pauses that are signposts to meaning. “When I start a scene, I say, ‘You know what? First, let’s just read it. We’ll get it on its feet later today, but first let’s read the scene.’”

Hayes may have a basic idea who enters where, but after that he lets himself and his actors explore their instincts. “Let me see what you do organically. I say, ‘No, that didn’t work’ or ‘This was a good choice” or “Oh, let’s go further with this. That’s good.’ …It’s a lot of work. It’s been a very slow process.”

One result is simplifying scenes. “Sometimes when we are organic, we get very active in the physical stuff from the stage and sometimes it just needs to be someone sitting on a sofa … (to show the) words are more important than the action.”

This is clear in a scene where after considerable bickering and fighting, Coleman and the Old Man sit down. Coleman asks, “Is there anything else you have to say to me,” seeking some kind of apology. But the father can’t utter the words.
.
Sitting quietly and still “gave that moment more weight….  Simplifying creates enormous strength,” Hayes said.

Kessler has been pleased because he believes that after a long career, “I’m writing the best plays I’ve ever written right now. I’m not a young guy, but I’m really vital.”

He sees common threads in his writing. “My plays are myths but they are grounded in powerful real strong emotions. I always start writing about people in conflict. Because I was an actor and I still am, I know what works is dramatic energies.”

With that base, “the plays become epic. I never write them to do that, but somehow they …  just seem to get bigger and bigger and more mythical. I think my plays are parables…. These people who, in their core cells, have been rejected but yet are living lives and functioning and pursuing their dream.”

Once he has an image or a premise, “I try to get my intellect out of the way. The struggle for me as a playwright is a struggle between imagination and intellect and letting my imagination take me on a journey. Because imagination is genius and intellect will always keep you into realistic almost cliché pathways.”

The Dramaworkshop, which gave birth to House on Fire, will host a look at other plays in the pipeline at a New Year/New Plays Festival running from January 4-6. Five evolving works will be given readings on the mainstage. Four of the five were chosen from among some 300 plays received by The Dramaworkshop during the 2018 submission period. The fifth play was commissioned by PBD for a future mainstage production.

The plays are The Captives by Barbara Blumenthal-Ehrlich, Drift by William Francis Hoffman, With by Carter W. Lewis, Ordinary Americans by Joseph McDonough, and Red, White, Black and Blue by local playwright Michael McKeever.