Posted on December 4, 2018 by Bill Hirschman 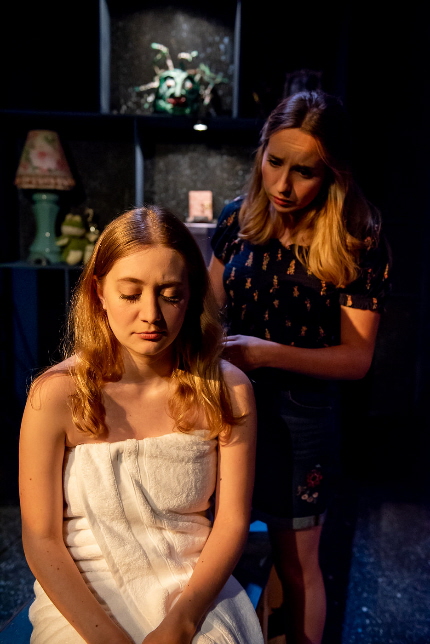 The emotional cauterizing of an already withdrawn teenager by a family dynamic of furious fights and fierce sibling rivalry forms the core of Tammy Ryan’s Tar Beach, receiving a sensitive examination from Theatre Lab.

Offered to the audience as a memory play by the now adult Reenie, her recollections of a troubled adolescence has streaks of love and humor to leaven the depiction of a blue collar family coming apart in Queens in 1977. A pivotal tragedy in the descent, but by no means the only one, occurs on the precise evening that a blackout set off a complete breakdown of civil order.

As a memory play that is not meant to be naturalistic, Ryan and director Matt Stabile ask the audience to meet them halfway stylistically because the family members are recollected and depicted as already far down the paths of their relationships when the reveries come to life.

As in The Glass Menagerie, our protagonist is trying to find meaning by reexamining and narrating her past for us. But, like Tom Wingfield, she finds little more than sad compassion for a no-win no-answers dead end that likely persisted long after her story ends.

And like The Glass Menagerie, it’s worth watching an elegy for a family struggling with the unspoken fear that disappointment is all that they can hope for. The most difficult aspect to deal with is, minor spoiler alert, that after everything has melted down, after relationships are damaged beyond saving, the family unit obviously will stumble forward into the future. The only bright spot is that the sisters forge a stronger supportive bond than existed before (or frankly, seemed possible earlier in the play.)

Reenie (Abby Nigro) invites us back to when she was a painfully shy and vulnerable 14-year-old, barely coexisting with her loquacious, taunting, explosive 16-year-old sister Mary Claire (Krystal Milles Valdes). They live in a small Ozone Park apartment with their father, Roger (David A. Hyland), a Teamster truck driver and moving man who dreams of something better and drinks because it never seems to have a hope of coming true, and their mother Brigit (Niki Fridh), a burned out cook in a deli who won’t even waste a breath on hope.

Mary Claire is trying to figure out how to join her partner in crime Mary Frances (Amy Coker) in a foray that night for a secret tryst with boys, beer and drugs. Although the parents are afraid that the serial killer Son of Sam is still at large, they consider letting Mary Claire go if she will take her sister. What occurs after that when the city is plunged into a blackout (no, Son of Sam does not interfere) creates multiple nightmares. The tension exacerbates the parents’ divisions past the breaking point.

Ryan’s dialogue and reporting of marital and familial interaction is simply superb. At a key juncture when potential tragedy bonds parents with a decade of slights and sins, Roger reaches out and says,

Later, Brigit is trying to bridge the abyss with Reenie. Ryan gives Fridh a brilliant heart-wrenching confession that the actress rewards with one of the most movingly delivered arias this season.

“I’m not a good mother. Not really. Okay. Not at all. My mother wasn’t neither. Some women just aren’t. Just because you’re a woman doesn’t automatically mean you know how to be a mother. Or want to be. I think I’m doin better than her. I never threw an iron at yous kids’ heads. I talk to you more than she talked to me. I don’t think I did worse than that. But I don’t blame her. Her mother died when she was twelve. What did she know, she didn’t know how to be a mother. She didn’t have a mother to show her. So I can’t really be a good mother for y’ou girls. You’re gonna have to mother yourselves. And that’s okay. If it’s not comin from the one who gave birth to you, do it for yourselves. I was better than my mother. You’ll do a better job than me.”

On the same note, Stabile has helped elicit vibrant, quirky performances from his quintet of actors who make their creations credible even though the personas are theatrically heightened, the daughters in particular. But Fridh’s Brigit is a stunning creation of a pragmatist who has learned that dreams are not just hopeless but a distraction from reality, even possibly soul-crushing in their own right.

Nigro’s Reenie seems ready to shrink from blows, even when none are present. But because she speaks to us, we hear an almost poetic soul yearning to escape by flying away.

Valdes, fresh from playing a much different teenager in Crooked at Thinking Cap, succeeds at the difficult job of playing jangly Mary Claire’s manic verbosity, ultra-defensiveness against being blamed, and heedless hunger for sexual exploration,  all in the first act, and then to become the concerned sister in the second.

Hyland makes credible the ne’er-will-succeed Roger’s escape into alcohol after getting laid off, and his dreamer mentality as he tries to help Reenie “escape” in the play’s penultimate scene.

Tar Beach runs through Dec. 16 at Theatre Lab on the FAU Campus in Boca Raton. Performances are 7:30 p.m. Thursday through Saturday and 3 p.m. Sunday. Runs 2 hours with one intermission. Tickets are $35. Log onto https://www.fau.edu/artsandletters/theatrelab// or call (561) 297-4784.