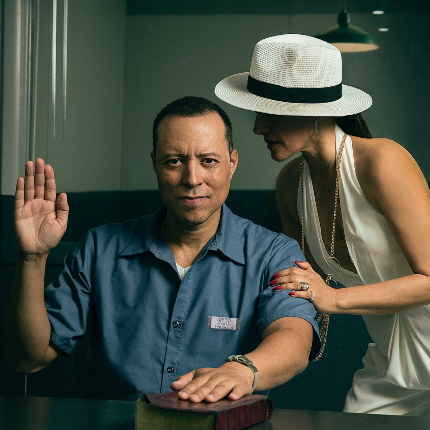 It’s Wednesday, March 7, and Billy Corben’s world premiere play Confessions of a Cocaine Cowboy has been in rehearsal for some time with Miami New Drama. It opens the next day for a week of audience previews and script tweaking at the Colony Theatre.

But Corben, the filmmaker of documentaries about how the violent drug trade was an integral part of the growth of his hometown, is in Sweden.

He inadvertently was booked into an international festival to unveil his film Screwball. So for several days, he has been watching rehearsals by Skype of the script that he co-authored with fellow Miamian Auren Squire.

“It was worst possible time to disengage because it’s been an extremely collaborative (process) by which I mean I’ve been extremely meddlesome” long distance, he said by phone in that jocular voice that says he doesn’t take himself too seriously.

The play is based on over a thousand pages of depositions given by Jorge “Rivi” Ayala, the hitman suspected of 35 drug-related slayings. Those documents formed part of the initial impetus for Corben’s series of Cocaine Cowboy documentaries that centered on drug queenpin Griselda Blanco. Those works documented the compelling, appalling and violent relationship of Miami and the drug trade.

This play is far from a documentary, said Michel Hausmann, the play’s director and artistic director of Miami New Drama.

As with most Miami New Drama plays, Confessions is constructed and designed to play into what theater offers that no other art form can. “This is not naturalism. This is absolutely almost operatic in scale,” Hausmann said. For instance, the first act can be described as “black comedy,” Corben said.

Corben added, “I created something purely theatrical. I really wanted to ensure that people got an experience that could not duplicated in any way.” In part, he feels a responsibility. “There will be a disproportionate percent of audience who never saw live theater before, but are coming because of the subject matter or the titles. We have an opportunity to introduce people to that art form.”

In news releases, the pair sum up the themes as weaving together immigration, children and gun violence, as relevant today as 35 years ago. Corben was quoted as saying, “If you take out the drugs and money, you still have many hot-button issues, like how the Miami of today is the America of tomorrow.”

Corben and his cinema partner Alfred Spellman in their company “rakontur” are best known for the scorching documentary Cocaine Cowboys released in 2006 and its sequel. But they have tackled many other subjects including underground backyard mixed martial arts fighting and former professional athletes who squandered their wealth.

Screwball, which recounts the high-profile doping scandal that rocked Major League Baseball, was a little different in that some scenes were recreated rather than using archival footage. Having to write those scenes from scratch was helpful practice for constructing Confessions, Corben said. Rakontur’s website described Screwball as “a madcap Floridian crime comedy in the vein of Elmore Leonard or the Coen Brothers while it raises serious questions about the ethics of professional sports.”

Although Corben is best known as a filmmaker, his love of theater stretches back much of his life. Hausmann revealed, “Billy secretly is a theatre geek. He has been one of our constant (audience members) at our plays.”

Corben toyed with playwriting at the New World School of the Arts high school, and was especially involved in the last show during his senior year, Rashomon.  While attending the University of Miami, by then committed to a career in film, he took courses that taught storytelling skills he later adapted in the film editing room.

Confessions’ genesis goes back years. Corben had been intrigued by Ayala early in his research for the first Cowboys film. But about 2 ½ years ago, Corben and Hausmann met. Over time in bar conversations, Corben intrigued Hausmann with his phrase, “In South Florida, great lies become truth.”

Spurred on by the raw material in Ayala’s voluminous confessing deposition. Corben floated the idea of a play. Although a profound lover of live theater, he initially wanted someone else to write it. Hausmann countered that Corben should write it and direct it.

“I told him to pound sand,” Corben recalls.

Corben declined the latter but agreed to the former when Hausmann hooked him up with Auren Squire, a Miami-based television writer whose work had never been produced locally.

Corben locked himself up in a hotel room for a few days to get a basic draft down. Then the two writers collaborated for months sending drafts back and forth through Google Docs. “The discipline required is beyond my comprehension and the pressure of assignment writing is overwhelming. So what (Squire) brought to the table is that discipline,” Corben said.

The script underwent many rewrites and tweaks, even through the rehearsal period. Having to be in Sweden during some of that period was difficult for everyone.

He jetted home hours before the first preview to tweak the play, currently in a full week of tinkering previews (at full ticket price) – something unheard of in South Florida for economic reasons.

Hausmann defends the technique common on Broadway: “It’s a new work and you really learn what a play is the moment it is on stage in front of an audience.” Referring to the local standard of theater only mounting one or two previews, he said, “It’s like opening a bottle of wine too soon.”

The play perfectly syncs with the mission and zeitgeist of Miami New Drama which in three years has produced theatrically stylistic work with serious themes and which aggressively reflects the young multi-cultural crossroads-of-the-Americas vibe of Miami.

“There is a mandate to be a reflection of the community. We do work that has everything to do with this multi-cultural multi-lingual, melting pot that has not melted yet and we do our work precisely to impact the community,” Hausmann said of Miami New Drama’s overlapping vision with Corben’s rakontur.

The cast and designers are once again, as with most Miami New Drama productions, a mélange of out-of-town artists and local veterans. They include Yancey Arias (Bosch, Agents of S.H.I.E.L.D,  Kingpin, Lethal Weapon) starring as Ayala, joined by Zilah Mendoza (Modern Family, Grey’s Anatomy); Carbonell award-winners Nicholas Richberg (Fun Home), and Stephen Anthony (Miami New Drama’s Our Town); Cuban-born, Miami-raised Andhy Mendez (The Blacklist, Orange is the New Black); Miami-based multidisciplinary artist Rudi Goblen (Miami New Drama’s Queen of Basel) and Bryan Blanco (rakontur’s Screwball). Hausmann notes that Richberg, a co-founder and leading man at Zoetic Stage, will for what may be the first time in career portray his actual heritage as a Cuban-American.

In the end, they hope, the effect will be thought-provoking, unsettling.

“Theater is a dangerous place,” Hausmann said, “There’s a tweet that Trump (wrote that) when Pence got booed for going to Hamilton, (he wrote) the theater is a safe place. And he’s completely wrong. American theater has made theater a safe place: You go in and know what you’re going to see. We (at Miami New Drama) have allowed theater to be what has been since the Greeks: a place of political conversation, a place to push buttons. Theater has always had that reflection of society. Theater always bites.”

Confessions of a Cocaine Cowboy from Miami New Drama, is currently in previews at full price prior to a gala opening March 16 at the Colony Theatre, 1040 Lincoln Road, Miami Beach. Shows 8 p.m. Thursday-Saturday, 3 p.m. Sundays. Tickets $39-79. Visit miaminewdrama.org or https://www.colonymb.org