Posted on February 6, 2020 by Bill Hirschman 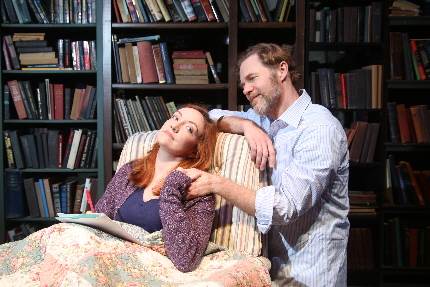 Simply describing the plot setup, Skylight might seem just an intriguing play focusing on an older widower trying to rekindle a relationship with a younger woman with whom he was having an affair with while he was married.

But David Hare’s 1995 drama slated to open at Palm Beach Dramaworks Feb. 7 is far deeper and more complicated. The narrative of human emotions is fused with a study of conflicting socio-economic-political attitudes on a dozen very timely topics, all colliding in passionate verbal sparring.

The efficacy and limits of communication in a relationship is a key factor: If these two fervent believers whose beliefs are central to their core, if they are to have any chance of reuniting, they will have persuade the other of the rightness of their solidified worldview or at least be able to coexist. Shades of your Thanksgiving family dinner with the in-laws.

Given the zeitgeist affecting America right now, director Vanessa Morosco said, “There’s some ways in which you feel like David Hare could have written this yesterday.”

The play premiered in 1995 in London starring Michael Gambon and Lia Williams, then moved to Broadway in 1996 winning widespread acclaim. The work was revived in London in 1997 with Bill Nighy. With a new director, Nighy and Carey Mulligan revived it again in London in 2014 and moved it to New York in 2015.

Plotwise, Tom Sergeant, currently a 50-ish wealthy restauranteur, once had a six-year-affair with his son’s live-in tutor Kyra Hollis, who is about 20 years’ Tom’s junior. When his wife, Alice found out about the relationship three years ago, Kyra moved to an economically depressed neighborhood to teach underprivileged children for a pittance.

As the play opens, Alice has died and Tom has come to Kyra’s very modest flat to persuade her to revive their relationship. Complicating matters is that Tom’s now grown son, Edward, has just visited Kyra for his own reasons.

Kyra espouses more liberal philosophies and Tom more conservative ones; they are very different people on many levels. For instance, they have divergent views about the guilt associated with those of privilege as well as the responsibility everyone has to others in society. As they explore each other’s feelings, their viewpoints tumble out.

But Hare undercuts the urge to stereotype by giving them atypical backgrounds. “Kyra is the one who grew up in the privileged class and had access to (higher) education. And it’s Tom who actually is a self-made adult. It keeps the audience on their toes in terms of (preventing them from) boxing these two into a corner.”

Peter Simon Hilton, who plays Tom, sees the opinions’ and conflicts’ resonances crossing the Atlantic Ocean since he was raised in Great Britain, and he has volunteered insights gained from living there in the 1990s.

“The conversations here in the States and also in Europe and especially the U.K. are about people with differing opinions and their contempt for how each other sees (the opposing opinions) and how they view life through their moral filters,” he said. “What they think should be the ethical contract that has been made by society is just so horrifyingly different that they can never get on the same page… that sort of sense of just digging in our heels and never changing our minds. Whatever the consequences, this is where these two stand in their conversations. However much they bend and try and make deals with each other, really, they’re just never going to change, and that is truly tragic.”

Morosco explored it further. “Right now in our culture, there’s this growing concern that social media and platforms like that are creating these sort of echo chambers of our conversational experience so that we’re frequently in… a virtual room with people who agree with us. What I think is extraordinary about this play is we get two people with … tremendously different points of view who stay in the room with each other and have difficult and exciting conversations. And I think it’s one of the things that makes them passionate about each other.”

Despite the deeper issues, Hilton doesn’t worry that the play might seem daunting to prospective audience members because Hare is such a clear writer and because the characters’ emotional history is easily understandable.

“Sometimes people might feel that going to see ‘an English play by a Lord English playwright’ that it might be complex and difficult to understand. But because Hare’s language is naturalistic and his characters recognizable, the play is very accessible and you understand exactly what everybody’s saying.”

David Hare, best known in this country for his play Plenty and the screenplay for The Hours, is a much-honored playwright in England, renowned for his politically-charged works (like the scorching satirical indictment of America’s entry into the Iraq War, Stuff Happens).

While Hare is famous for his liberal anti-Thatcher opinions uttered here by Kyra, most observers believe he has worked hard to make the arguments honest in Skylight.

Sarah Street, who plays Kyra, offered, “Even though there’s a lot of political stuff in the play, I think because he has truly written a play about this relationship, you don’t feel preached to in any way. Of course, having been familiar with some of Hare’s other work, we kind of know where his mind is politically. But I do think he’s very fair and balanced play here. They both have very strong and articulate arguments or their own points of view.”

In this time of raised consciousness of the #metoo movement, the Dramaworks team is aware of the touchy subjects of the April-October relationship, varying views on extramarital affairs and other issues. But Morosco notes that Hare’s Kyra is every bit the equal of Tom. She quoted Hare in an interview when he noted “how rare it was (in theater) to spend an entire evening with a woman on stage.”

“I think that is really an exciting thing to do and not an opportunity we get very often. It’s also her environment. I mean, it’s her apartment. She owns the space. And that is actually quite rare as well.”

An added layer to this production is that Morosco and Hilton are married. Morosco is a veteran actress and director who wowed audiences last season as Bunny in Dramaworks’ The House of Blue Leaves, while Hilton scored the year before as Dysart the agonized psychiatrist in Dramaworks’ Equus,. This is the only the second time she has directed him; the first was production of Henry V1 Part 1. But this is the 15th time they have worked together including Dramaworks’ Arcadia in 2017.

Hilton said the trust factor is a huge factor, “People always say you like to work with the person that you live your life with, that you love. Well, I think one of the great assets that you have is that you want them to look good, to be good, to succeed, and that is reciprocal. You’re working to make the product as good as possible because that’s what you want to do for each other.”

The players expect a vibrant evening of ideas that they hope audiences will mull over after the play is ended.

Street said with a bit of humor, “There’s going to have plenty to talk about.”

Skylight will run Feb. 7-March 1 at Palm Beach Dramaworks, 201 Clematis St., West Palm Beach. Previews Feb. 5 and 6. Show times are 7:30 p.m. Wednesday, Thursday and some Sundays; 8 p.m. Friday and Saturday; and 2 p.m. Wednesday, Saturday, Sunday. Individual tickets are $77. Student tickets are available for $15, and Pay Your Age tickets are available for those 18-40. Tickets for educators are half price with proper ID (other restrictions apply). Call (561) 514-4042, or visit palmbeachdramaworks.org.