This Joint Is Jumpin’ Sometimes In Ain’t Misbehavin’

Posted on February 7, 2020 by Bill Hirschman 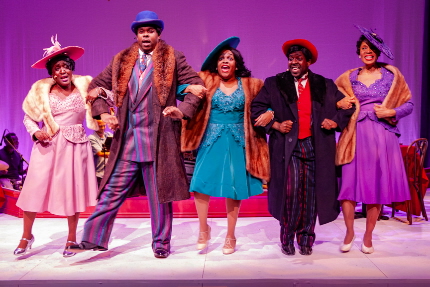 Sometimes the joint is jumpin’ in M Ensemble Company’s production of Ain’t Misbehavin’, sometime things are pretty sluggish; sometimes you can savor the brilliant lyrics coming from a talented quintet of performers, sometimes you can only understand half the words.

The moments that work are a joy to be present for and you’re grateful for the gift, some others are a disappointment.

Ain’t Misbehaving, the 1978 Tony winning revue, is a nearly dialogue-free procession of about 30-plus glorious examples of black music from the Harlem Renaissance of 20s and 30s, primarily but not exclusively by Fats Waller and his colleague Andy Razaf.

The song list is a compendium of rousing celebrations of life, wry slick comedy numbers and a host of deeply felt ballads – the majority of which deal with love and sex, true love, love done wrong, the pursuit of love, songs insisting your lover treat you right – all the possible permutations of relationships shot through with rapture and/or anguish.

The production directed by Jerry Maple Jr. with musical direction by Christina N. Alexander and choreography by Keith Wilson invests a storytelling element in nearly every song. The performers are out on the town together at a Harlem nightclub, often sitting at tables listening to a performer or providing background vocals. The performers tease each other, embrace each other, dance with each other and use unbridled facial expression to underscore what they are singing and how they are reacting to the words someone else is singing.

There are some sublime moments such as the heartfelt poignant lament in which all five voices weave together in “Black and Blue.” On the surface it’s simply about heartbreak but there is an unmistakable comment on race relations including the startling lyric, “All my life through I’ve been so black and blue / I’m white inside, it don’t help my case / ‘Cause I can’t hide, what is on my face, oh!”

Or Dozier investing heartache in “Mean to Me.”  Or the two guys seducing the audience into participating in a rollicking “Fat and Greasy.” Resistance to the passion and energy is futile to these and other numbers.

But the production has more than its share of problems. First, many many many tongue-twisting lyrics are lost. Part is just sloppy enunciation and varying vocal projection even within a single line of lyric. Part is the amplified level of the band overpowering the level that the microphones are set for the singers, especially when the brass is swinging.

Second, some of the staging has people placed so far to one end of the stage or the other, practically behind the curtain legs, that either some audience member have trouble seeing them, or even worse, don’t realize that they are part of the number.

And most baffling is the incessant interruption of choreographer Wilson as a waiter silently delivering drinks or clearing away glasses in nearly every scene, constantly pulling focus from the people in the center of the stage singing a number.  Doubtless, somebody thought that image added some atmosphere of a club, and it did a bit the first 14 or so times it was employed. Then it was simply distracting and eventually downright infuriating.

A nod is due Shirley Richardson for the men’s cartoonish costumes and the women’s elegant gowns and expressive hats.

Sultry, spirited, sweet and sexy, M Ensemble’s Ain’t Misbehavin’ is uneven but worth a visit for those moments that have the audience mesmerized.