Taking The Show On The Road: San Francisco Is A Theater Town 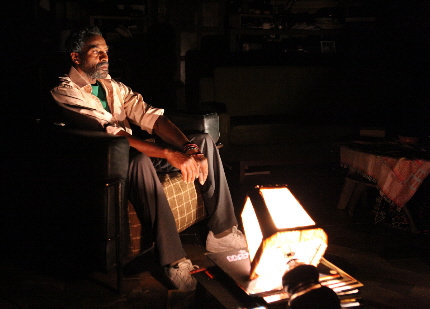 Carl Lumbly as Gil Scott-Heron in The Magic Theatre’s world premiere of Grandeur, one of many superb productions in San Francisco earlier this summer / Photo by Jennifer Riley.

South Florida theater lovers know all too well that beach and golf-obsessed tourists and visiting business leaders rarely think of this region as a mecca for a wide variety of drama, comedy and musicals. But we know those people are depriving themselves of experiences more rewarding than yet another night on a South Beach bar.

The same problem faces the San Francisco area. The Golden Gate Bridge, cable cars, Alcatraz, all beckon visitors. Yet in the popular consciousness, theater in the Bay Area does not strike many as a stand-alone reason to book a week there.

But this summer’s conference of the American Theatre Critics Association proved that the Bay Area is a cornucopia of dynamic and challenging theatrical offerings — even worth passing up tourist traps like Fisherman’s Wharf.

The city hosts a concentration of theaters large and small downtown near Union Square, a focused district South Florida does not have. But there’s just as many venues spread out from Fort Mason to Berkeley and lining the coast from Marin County to Palo Alto. And the offerings have a level of quality that is competitive with regional theater hubs around the country.

As with any metropolitan area, the most attention is lavished on the tentpole theaters such as the complex of American Conservatory Theaters. But our recent trip highlighted the scores of companies from the African-American Shakespeare Company to the Magic Theatre, from PianoFight to FaultLine Theater.

You could catch world premieres at the expansive TheatreWorks in Silicon Valley or familiar title in musicals from Broadway By The Bay. There were plays unveiled in site specific venues and under the stars, gleaming new venues and wonderfully hoary old theaters that date back generations.

Nestled in the golden foothills to the east in Orinda is the 43-year-old California Shakespeare Theatre, an open-air amphitheater that offers not just the Bard’s oeuvre but classics by Tennessee Williams and contemporary work by Marcus Gardley. (http://www.calshakes.org/) We were gifted with its steampunk-inspired production of As You Like It. But it’s indicative of the hunger of local audiences that the company hosted a panel discussion about making Shakespeare relevant and engaging to a 21st Century audience—with the artistic directors from four local companies dedicated to producing the Bard: CalShakes, Arabian Shakespeare Festival, San Francisco Shakespeare Festival, Marin Shakespeare Company and the African-American Shakespeare Company.

That last group (http://www.african-americanshakes.org/) is a venerable company currently seeking a permanent home, but its vibrant The Winter’s Tale helmed by director L. Peter Callender deftly molded a troupe that ranged from veterans to novices, including an experienced lead portraying Leontes but who had never performed Shakespeare before.

Marin Theatre Company, in tree-lined Mill Valley across the Golden Gate Bridge, offered its take on the comedy about a straight man earning a living as a drag queen, The Legend of Georgia McBride. The same play was done a few weeks earlier at GableStage in Coral Gables, although the California company had five weeks of rehearsal compared to the Florida troupe’s three. The company favors new works both on its mainstage and in its cockpit-configured black box. (http://www.marintheatre.org/).

Easily the biggest surprise was the Broadway by the Bay in San Mateo which mounted as faultless, lush and energizing a production of Smokey Joe’s Café as you’ve likely seen with fine production values, a live kick-butt band and a cast that  would be hard to better. The kicker is that the 50-year-old company is a community theatre. The professionalism and talent are of such a level that twice during intermission we asked its leaders whether it really was community theater. Indeed, a few members of the creative team were paid something, but most people worked strictly out of love for the art. (http://www.broadwaybythebay.org/). It performs at the 1929 Fox Theatre, one of those opulent-beyond-belief movie palaces turned into a legitimate stage.

TheatreWorks in Palo Alto (https://theatreworks.org/), which leans toward a mixture of contemporary and new titles, did not offer us any production other than a few intriguing numbers from its evolving musical The Four Immigrants, which examines the Japanese-American experience from the newcomers’ viewpoint. But the critics were given a tour of the amazing physical space whose facilities and staff were genuinely breathtaking – carefully-managed resources that any South Florida company would envy.

San Francisco Playhouse (https://www.sfplayhouse.org/sfph/) is a 2003 company situated in an aging venue downtown on the second floor of the Kensington Park Hotel whose history seemed embedded in the walls of the renovated auditorium. We saw its production of Jen Silverman’s The Roommate about a Midwestern divorcee starting a new life by taking on a mysterious boarder from New York City. Many of us saw the script when it premiered two years ago at the Humana Festival in Louisville. The ways each theater found completely different colors in the same piece was fascinating.

The Magic Theatre (http://magictheatre.org) that faces on the bay is an institution that gave Sam Shepard’s work some of its earliest productions. Its intimate playing space was the host for Han Ong’s bio-play Grandeur about famed musician and author Gil Scott-Heron with a tour de force by Carl Lumbly, who left Cagney & Lacey to become one of the region’s most respected actors. In its tiny playing space, set designer Hana S. Kim and set dresser Jacquelyn Scott created the artist’s tiny apartment jammed with mementoes and reminders of his past.

But this is barely a sampling: the array encompassed A Night With Janis Joplin at American Conservatory Theatre, Brownsville Song (another Humana premiere) at Shotgun Players in Berkeley, Kurt Vonnegut’s Mother Night at Custom Made Theatre Co., the allegedly Broadway-bound tryout based on the film Monsoon Wedding at Berkeley Repertory Theatre, Sex and the City Live! At Oasis, Sordid Live and Warplay at New Conservatory Theatre Center and You Mean To Do Me Harm at the Sandbox black box arm of San Francisco Playhouse, even the arrival of the stage version of The Graduate by the Palo Alto Players.

During the day, the city of San Francisco is, of course, a major magnet for tourists. Besides the obvious draws, we recommend checking out its small but beautifully arranged and stocked Aquarium of the Bay on Fisherman’s Wharf; the enthralling Blue & Gold Cruise Adventure, which takes you past Alcatraz and through the Golden Gate Bridge, and our favorite, the Walt Disney Family Museum in the Presidio that traces Disney’s biographical past (including the warts), his evolution as a cultural icon and his preternatural vision.

And if you have extra days, swing down to Monterey and Carmel for fine food and art galleries plus a terrific aquarium with live sea otters both in the bay and in exhibit halls. And if you really have the tine, head down to the legendary Hearst Castle; it’s a bit of jaunt but worth every mile on the road. Allow at least a full day to crack the surface of what it offers.

One way to save money on seeing the bold face name attractions in San Francisco (as well as Atlanta, Boston, Chicago, Philadelphia, New York City, Tampa Bay and other spots) is to buy a CityPass which gives you significant discounts on four to eight major attractions. This sounds like a come-on but it really does save money if you’re planning to see all the major tourist spots. Too bad they haven’t got one yet for Miami. (http://www.citypass.com/)

This entry was posted in Features and tagged San Francisco. Bookmark the permalink.