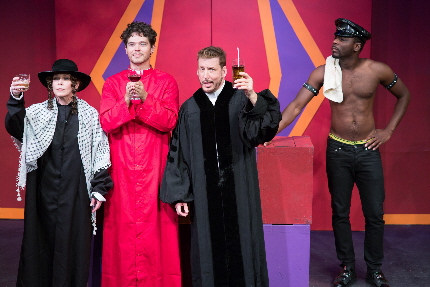 So A Rabbi, A Priest And A Minister Walk Into A Bar (Christina Groom, Jordon Armstrong, Lawrence Buzzeo and Marquise Rogers) in Shorts Gone Wild 5 / Photos by George Wentzler

When Shorts Gone Wild first appeared five years ago, the somewhat risqué spin on City Theatre’s Summer Shorts paradigm tried to be a little daring, a little naughty. Each year, the material eased into a deeper shade of blue and the performances grew increasingly exuberant.

Like its parent productions, several of the short plays were entertaining, a couple truly funny and a couple must have seemed promising on paper but did not work very well in performance.

But this edition feels different. Every one of the eight playlets focus on gay couples or a gay central character. That’s not what seems remarkable. In fact, that’s it: Shorts and its audience have matured to the point where it’s not remarkable.

No matter how frank, unrestrained and downright ribald the premises and their executions, there’s a sense that it’s all absolutely normal, that in fact there isn’t anything “wild” or boundary-busting about these pieces. Indeed, there’s an unstated but discernable sense of celebration that these plays, comic and dramatic, are about universal human relationships that transcend varied sexualities – while exuberantly situated in a LGBT universe.

The most striking is Clarity, a monologue by promising writer Korde Arrington Tuttle, performed by newcomer Marquise Rogers (who was in M Ensemble’s The Kings of Harlem) and directed by Gladys Ramirez.

Cameron is a gay man taking off his street clothes and donning a tux before marrying the love of his life who is white. Cameron speaks to the audience with boundless joy, energetically hip-hopping around the stage convincingly brimming with smooth street-corner rhythms, using the N-word prolifically and exulting about the rough sex he has with his intended.

But something happens to the language as he talks about when his grandmother hung up when he invited her to the wedding. And then Cameron begins riffing on the intersection of racial discrimination, self-image and the redemptive power of true love.

At that point Tuttle morphs into carefully crafted nearly poetic prose that resonates with anyone, regardless of sexual orientation. It can be argued that Tuttle seems to portray one man saying the words at the top of the skit and another saying the words at the end. But perhaps that was the point: that an everyday person you’d meet on the street harbors such feelings.

The penultimate speech quoted here in snatches contains a brilliantly insightful portrait of a dizzyingly complex African-American wrestling imperfectly with the personal scars left by this country’s shameful past.

Then citing his white fiancé, “Maybe I decided I couldn’t spend the rest of my life with another fractured thing, a broken thing and gravitated towards someone who’s never been three-fifths of a whole. Because that’s how I want to be seen. As whole. As someone who people might give a shit about, if I ever died in police custody…. Ya know, every once in a while, when I let myself really go there, I remember that everything hurts. That—fractured or not—I am and have always been a dying thing. And I feel blessed to have found someone willing to love me in spite of that.”

Such somber moments notwithstanding, merriment pours out of the six actors during the evening of silly wacky plays even as some take a left turn into more touching emotional territory. Unlike past years, usially those turns seems natural and unforced.

The overall evening echoes a TV game show with musical themes from The Match Game to Who Wants To Be A Millionaire distracting patrons during scene changes plus a ‘60s Popsicle-colored scene design by Ardean Landhuis. As in past, the cast allows chance to choose the order of plays except for the last one. This year the choice is made by audience members attempting to match up titles on a big game board much like the old show Concentration.

Despite the comedy, Shorts in all its incarnations is almost always the most effective with quieter pieces about human emotions such as Clarity. A leading example is Summer Shorts’ Tornado by Arlitia Jones in 2014, starring Tom Wahl directed by Margaret M. Ledford about a grieving father seeking a sports outfit for his dead son — one of the masterpieces in Shorts history.

Similarly, the other piece here that stays with you is Carly’s Last Call by Michael McKeever and directed by Matt Stabile. We see drunken patrons in a gay bar: Carly (Rita Joe) drowning some deep pain, the nearly passed out Janice (a hilarious Christina Groom reminiscent of the dormouse in Alice in Wonderland), Derek (Lawrence Buzzeo) and the patient friendly bartender Jordon Armstrong who has 86-ed the group. A crucial plot twist is not a shock so much as a set-up for the second half of the play. What makes the piece land so well is the touching relatable performance by Rita Joe as she works her way through the source of her sorrow.

So A Rabbi, A Priest and A Minister Walk into a Bar, written and directed by Michael Leeds, sets up that trio (Groom wearing curly payots, Armstrong and Buzzeo) waiting for their car to be fixed by walking into a bar – a leather bar.

The Adventures of Gay Man – Birth of a Hero, written by Kris Thompson and directed by Stabile, is a pleasant spoof in which Joe is a talent agent for superheroes in an age with a surfeit of candidates. Armstrong is a hapless applicant dealing with a bored receptionist (Groom in yet another persona) and who is getting nowhere until he is revealed to be gay – a unique enough twist to interest Joe.

Persona by Cassandra Rose and directed by Ledford (is the title a nod to the Ingmar Bergman movie?) compassionately but drolly focuses a comically shy Sabrina Lynn Gore on a first date with the more experienced Groom who gently guides her into new territory.

And then there are the others:

Déjà Vu by Steve Yockey and directed by Leeds in which, how to explain this, two lovers on a third date explore various off-beat and increasingly bizarre aids to sexual stimulation including a baby bottle. Enough said.

Valkyrie in the Roller Derby by Seamus Sullivan and directed by Ramirez in which, we’re not making this up, a 1,003-year-old Norse deity (Gore) is deep into a difficult relationship with a modern-day English teacher turned roller derby queen (Joe). Whatever. This works only because the actresses keep plugging away enthusiastically.

And then there’s Give Me Space by Spenser Davis and directed by Ledford in which lovers Buzzeo and Rogers are breaking up with the usual classic recriminations after a cocktail party. Except that it’s on a space station populated by only eight people. Yes, the first gay couple in space. That’s it. Ledford almost pulls this off by having the actors move slowly as if in a weightless atmosphere.

Shorts Gone Wild 5 from City Theatre and Island City Stage runs through Sept. 10 performing at The Infinite Abyss stage, 2304 N. Dixie Highway, Wilton Manors. 8 p.m. Thursdays through Saturdays and 5 p.m. Sundays. Running time is two hours with one intermission. Tickets $35. (954) 519-2533, or http://islandcitystage.org/boxoffice/shorts-gone-wild-5/. Note that some performances are already sold out.