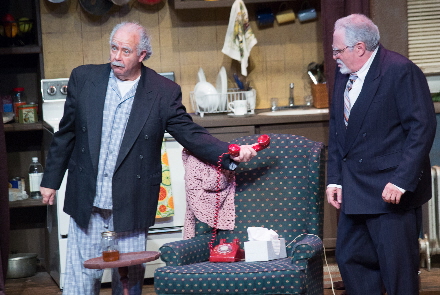 Seniors and caretaking Boomers recognize the real pain informing the facile catchphrase “Growing old is not for sissies” – a quality sharing the stage with copious laughs in Broward Stage Door’s production of Neil Simon’s The Sunshine Boys.

Simon stocked this 1972 script of battling curmudgeons with a steady barrage of rapid-fire witticisms and cutting jibes you wish you could remember for your next argument. But this was another step in Simon’s evolution toward secreting serious themes inside the farcical hilarity.

The Stage Door production helmed so capably by director Michael Leeds never unduly spotlights those facets, but deftly weaves them in without shying away from them either.

The well-past-their-prime vaudevillians Lewis and Clark are still razor quick with an impromptu quip-in-search-of-a-rimshot. But they groan and shuffle as they move. You can see in their faces the fear that the encroachment of age poses a fatal threat to the pride that has kept them alive this long.

Granted, the unrelieved ranting and kvetching gets just a shade old after an hour or so, but Leeds’ note-perfect pacing keeps the audience engaged, and Michael H. Small as the insatiably disgruntled Willie, and Peter Librach as the burned out Al have such fun chewing up Simon’s dialogue that it’s simply infectious.

Indeed, Small, Librach and Ben Sandomir as Willie’s beleaguered nephew Ben perform a delightful concert of Tri-Borough Brogue verbal music played in the key of Sid Caesar’s Show of Shows and with unique rhythms that land solidly to this day.

The story is set in 1976 with 80-something Willie marinating in his tiny apartment about the way the world has passed him by. For 43 years, he and his partner Al Lewis were headliners on vaudeville, club dates and early television. They were never close personally, but they appreciated each other’s unrivaled expertise. So when Lewis abruptly decided to retire 11 years ago, he left Clark as furious as an abandoned wife because Willie only lived to perform.

Willie’s ability to get work has evaporated in part because he can’t even remember the name of the snack chip he is hawking in a commercial —  and likely his irascible personality makes him impossible to work with.

Then nephew Ben, a talent agent who visits weekly, produces an offer. CBS is doing a special history of comedy and wants the two men to recreate their classic vaudeville sketch, “The Doctor Is In.”  Neither wants anything to do with the other, but the only way they can bask in the spotlight again is try against all odds to get along. Good luck.

The audience gets to watch the men run through much of the skit in a dress rehearsal that everyone knows is doomed. An interesting choice is that both actors shamelessly play the parts a shade over the top, mugging to the television audience.

Librach is solid in the less showy part, exuding the pride that is at risk in the clashes. But Small was born for this role. He convincingly ages an extra 20 years and his demeanor clearly communicates Willie’s anger at the betrayal of his body, society and time itself. The train of fame has not only left the station, but he can see it receding over the horizon,

George Schiavone plays a patient in the TV skit, Elijah Pearson-Martinez is a TV stage manager, Vicki Klein is a nurse attending to Willie and Jeanine Gangloff is the requisite tall sexy buxom nurse in the skit.

A shout out is due Michael McClain’s set design and Larry Bauman’s props, which recreate Willie’s deteriorating dingy one-room apartment with mementoes of his career in every corner including a long out of use straw boater and cane in the umbrella stand.