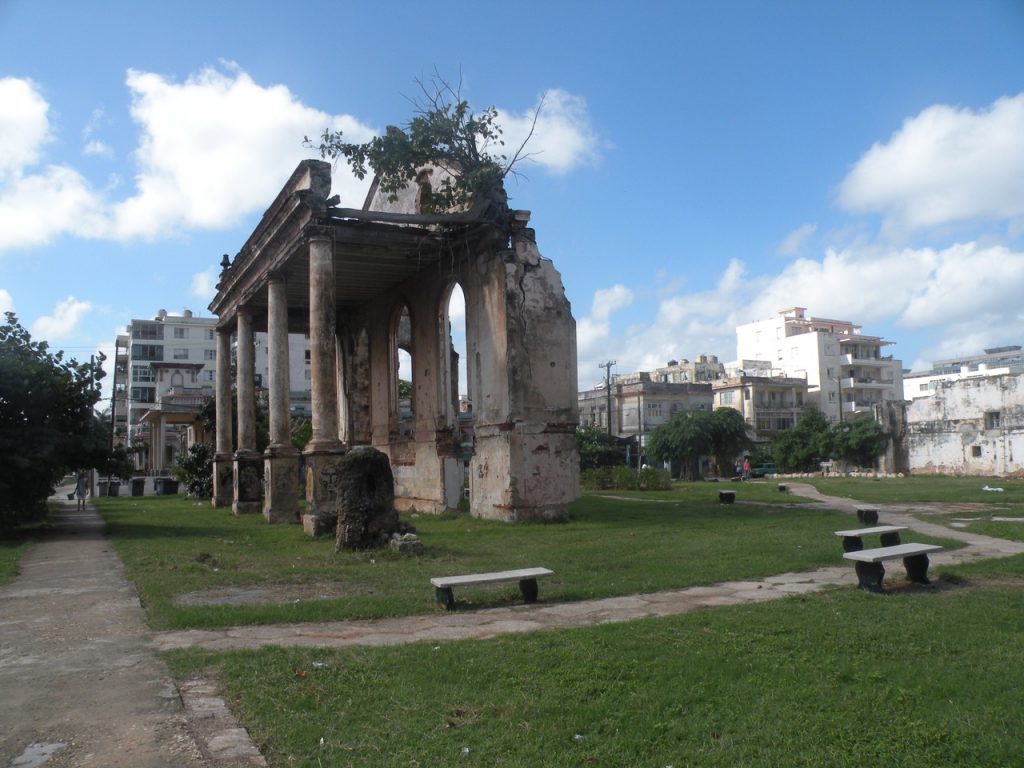 The ruins of a building in Cuba echo the ruins of Berlin Wall, a photo to be used in Theatre Lab’s production of Vanessa Garcia’s Ich Bin Ein Berliner

Imaginative theatricality often spiced with whimsical fantasy has imbued many of Theatre Lab’s projects from fully-produced plays to staged readings, considerable educational efforts to online outings. But this month’s just-outside-the-box venture is breaking the traditional paradigm even further.

In the company’s first for-pay event in more than a year, Garcia’s deeply personal memory linking the end of Communism in Europe and the Communist control of Cuba has evolved from the idea of a conventional stage piece into the present triple formats:

.      —A fully-produced audio-only version streamed online with a full cast, not a staged reading but similar in delivery to a radio play or a podcast.
.      —The same online recording augmented visually with cartoon drawings, simple animation and photos echoing the central character’s memories, sold at a separate price.
.      —Both elements presented to a small socially-distanced audience in the amphitheater of Florida Atlantic University’s theater complex in Boca Raton. This “Live Listening Event” edition will present no live actors. Instead, two live musicians will perform underscoring as the audio drama is played, flanked by two large video screens depicting the visual augmentation, plus a theater set depicting Miami, Cuba and the Florida Straits.

This last will be presented only three times: this Saturday and Sunday, although those patrons will be able to re-see it for free when the first two options are streamed April 5-May 26.

Theater Lab’s playwrights, director, actors and designer have explored mixed-media productions before under the leadership of Artistic Director Matt Stabile, notably Everything Is Super Great in 2019.

The spine of the play is a theatrical reinterpretation of Garcia’s true life struggle as she looks back on a linchpin event of her childhood. When she saw the fall of the Berlin Wall televised in her sister’s fifth-grade classroom in Miami in 1989, the sight of the event a half a world away inexplicably seared her soul and she broke down in tears. The play traces her ensuing exploration of why it affected her so deeply and continued to throughout her life – a journey informed by her Cuban roots.

“It starts with a little girl who was trying to figure out why she is crying at the fall of the Berlin Wall when she’s never even been to Berlin and then understanding that it has everything to do with the tug of her own Cuban roots and the hopes that that may happen in her own motherland one day,” said Garcia, the Miami-based playwright and director whose work included the phenomenally successful immersive 2019 play, Amparo.

The company describes it as “re-tracing her relationships to pop culture, capitalism, Berlin and her familial history, revealing the true interconnectivity of the world and the urgent need to share that truth – as Cuba itself dreams of a future unimaginable for the past six decades.”

Stabile agreed. “It has this educational component, it has this Miami component, which is, you know, so near and dear to my heart, and it has this sort of like, social justice make-the-world-a-better-place component.”

The title comes from President John F. Kennedy’s historic anti-Communist speech given to a crowd in West Berlin in 1963, pledging solidarity. It concluded “All free men, wherever they may live, are citizens of Berlin, and, therefore, as a free man, I take pride in the words ‘Ich bin ein Berliner.’” The phrase of compassion and brotherhood, which translates to “I am a Berliner,” was echoed in many situations over the past three decades such as when people around the world substituted the words New Yorker or American after 9/11.

The genesis of the play dates back to the summer of 2019 when Garcia communicated something of the idea to Stabile with whom she had worked several times.

“I didn’t understand what was happening in my own brain but I had these obsessions (with the destruction of the wall and Cuba). So I started with a question, which is ‘Why do I have this obsession?’  Little by little, I had started to put together that this does have to do with Cuba and my relationships.”

Stabile recalls, “She was like, ‘Hey, I’ve got this crazy idea for a play. And I don’t know totally what it is. But it’s about the Berlin Wall and me being upset.’…  It was an in-person show. She had this idea to make the theater look like a classroom, like everybody (in the audience) was in the class.”

Budgets were tight, but he set out to find money for a commission in August 2020. Then he thought of the audio approach because he had done perhaps 35 during his career.

When she had a script, the company did a reading last October as the final event in the theater’s Playwright’s MasterClass Series and the third of the commissioned audio plays. Some changes were needed and Stabile realized he needed more audibly distinct voices for some parts. As the script evolved, additions were made.

A Zoomed rehearsal was held. Then in mid-March, each of the actors recorded their parts – separately and in separate sessions. When they really needed another voice to play off of, Stabile the director (and former actor) read lines to them. This method was crucial because it persuaded the Actors Equity union to give its approval for the company to hire its members. The union, trying to protect the health of its members, has angered several local theater company leaders for putting up difficult hurdles and being slow to respond to proposed productions.

In late February, Matt Corey, who had constructed impressive soundscapes for other Lab shows, began the process of complex sound engineering. Michael McClain designed the set being used in the amphitheater. Nicholas Chimienti created videos. John Shamburger delivered the illustrations. Garcia provided photos of her family. Garcia has blessed their contributions although she hopes someday to rewrite the work into a stage play.

Garcia, who will play herself in the production, will be joined by Elena Maria Garcia, Diana Garle, Gaby Tortoledo, Lindsey Corey, Carlos Alayeto and Krystal Millie Valdes, with interview recordings of Garcia’s mother Jacqueline Rivasés and her grandfather Severo Rivasés.

The production with a fair-sized cast, Garcia’s commission and the technical aspects will likely cost about $40,000. But Stabile has been an outspoken voice for keeping local artists employed financially and artistically during the pandemic.

“We were really, really thankful (to Equity) that we were able to do it because we got in a time when everybody’s not been able to get work and not been able to get insurance weeks and things like that. We were this contract with providing eight weeks of salary and five weeks of health care,” Stabile said. When he notified the cast member, “one of the actors… broke down in tears, and that was for me like ‘Okay, here’s the reason we’re doing it.’ ”

Ich Bin Ein Berliner  will be presented by Theatre Lab beginning this weekend in three modes,

Audiences will also have two ways to experience the show streaming on digital platforms, “audio only” or “audio with visual companion,” featuring illustrations, animations and photographs designed to support the story. Streaming events will be available beginning Monday, April 5, and can be streamed at the convenience of the ticket-purchaser. Streaming is scheduled to end on Sunday, May 23. Tickets are $5 for “audio only” or $15 for “audio with visual companion.”  Streaming tickets can be purchased at www.fauevents.com.