Last Call Is Worth Dropping In For Before Closing Time 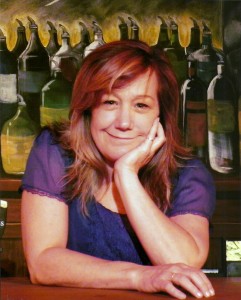 In Last Call, it’s the patrons who sit and listen to the bartender talk about her life. Turns out the bartender is more fascinating and better company than her customers ever could be.

The world premiere of Terri Girvin’s funny and even touching tour through the interior life of someone people take for granted is a modest gem worthy of dropping in at faux tavern inside the tiny Empire Stage.

The catch line may not sound promising – an autobiographical one-woman comedy about a former actress and stand-up comic who is now a bartender, talking to us before and during a harried shift in a neighborhood watering hole in New York City. But Girvin is a naturally engaging storyteller and her cannily efficient preparations for the coming shift are interspersed with quirky tales of growing up with an idiosyncratic mother who now wants to move her train wreck of a life from California to Girvin’s backyard.

Last Call instantly grabs the audience as Girvin enters the bar to set up for the night. Girvin, a diminutive woman with a faint blue collar air, wins us over with a self-deprecating, world-weary wit, a sharp eye for human foibles and a willingness to expose the secrets of a good bartender such as placing the napkins on the bar in a way that cuts down the number of steps she’ll take on the 11 miles she’ll walk tonight.

But even more telling is when she reveals she’s really thinking. She always answers perfunctory inquiries of “How ya’ doin’?” with a slightly sardonic “Livin’ the dream.” In fact, the dream has some nightmarish facets such as her needy mother’s pleas to save her life. Much funnier are her silent retorts to such silly requests as an order for an ultra-sweet concoction:  “There’s a world of adult liquor here that does not scream, ‘Burp me.’ ”

The transplanted New Yorker has been developing the piece for quite some time with local director Michael Leeds and sound designers Phil Palazzolo and David Hart. The end result is an amazingly smooth and fluid piece of theater.  It bounces back and forth in time and place as Girvin recalls scenes from her childhood and previous crises dealing with her parents, all interspersed with a dizzyingly busy night coping with regular customers, drunks, lechers, an old boyfriend and other denizens.

“Sometimes I feel like Julie the cruise director on the Douche Bag Boat,” she tosses off with a wry smile.

The long gestation has enabled Girvin and company to evolve an breathtakingly intricate interplay of monologue, action and sound bites so that we hear her conversing with a large cast of characters, hear her slicing invisible limes, hear her slamming the cash register drawer closed, watch her stride up, around and even atop the bar, all adding up to an intricate physical and aural dance as carefully choreographed as a ballet and more fraught with the potential for fatal gaffes than a circus aerialist act.

But what gives the 80-minute show dramatic heft is the running battle over the phone with her out-of-control mother who is inherently funny (she was a party clown for years) but also an alcoholic and a black hole for affection. The anguish she causes Girvin will strike a chord with any adult wrestling with the looming responsibility of being a parent to their parent.

“Every phone call feels like she’s taking a piece of my soul,” Girvin says.

As her mother’s pleas increase, Girvin and Leeds ratchet up the pace at the bar until it seem s impossible that any single human being could keep up with the simultaneous demanding demands of the mob around the bar.

As astounding as Girvin and her team may be in marrying the precision soundscape and her highly-polished performance, it’s not a trick on display for its own sake. It’s technology in direct service of Girvin’s artistic vision.

Last Call is one of those nice surprises for serial theatergoers who will find themselves suddenly charmed by an entertaining and intriguing piece of work.