What To Look Forward To Next Season: Well, Our Opinion 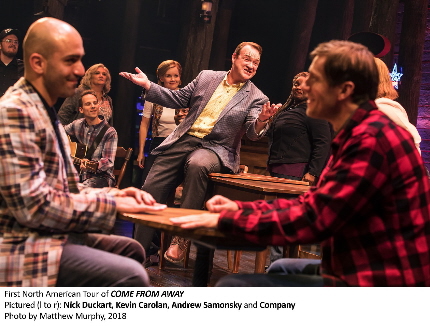 Anticipation is one of the real joys of scanning a coming season.

What follows is a completely subjective and personal list of titles we’re looking forward to (besides the return of Hamilton to Miami and West Palm Beach), some because the material is so good, some because the troupe has a strong track record, some because the premise sounds interesting. Of course, there’s no guarantee they will fulfill our hopes, but given the presenting companies, we’ll lay bets on their behalf.

A key element for some will be how well they are cast (Gypsy and The Music Man, for instance) although the South Florida bench of A-list actors keeps getting deeper and deeper.

Mostly left off the list are the many world or regional premieres that are part of so many companies’ rosters or in the case of companies like Theatre Lab, their entire season.

So, in no particular order:

A Streetcar Named Desire (Palm Beach Dramaworks Oct.  11 – Nov. 3 ) – Surprisingly, this classic hasn’t been done by a local professional company in nearly a quarter-century as far as we can research. Assuming the leads have that extraordinary charisma that the parts require, this title is precisely the kind of work that this company excels at. It’s also part of a genuinely exciting season that no longer has a summer musical but will mount Adam Guettel’s  The Light In The Piazza in April.

Ragtime (Slow Burn Theatre Co. March 20–April 5) – We just saw a superb production at the summer repertory at our alma mater, the University of Missouri. With budget-challenged production values, but a 16-piece orchestra, 34-member cast and leads with superb voices, it reminded anyone that the raw material is so breathtakingly strong. Can Slow Burn muster the finances to stage it with necessary scope? Who knows, but they long ago proved they can find the talent.

Come From Away (Broward Center’s Broadway Across America April 7 – 19 and Kravis Center March 31-April 5) – We saw the original and still-running production in New York; we saw the national tour in Miami with Nick Duckart. We will not miss it when it plays here again; it is simply one of the most spiritually uplifting musicals we can remember. Here’s our review of the tour when it was in Miami: Click here.

Man of La Mancha (MNM Theatre Company Sept. 13-29) Beloved for one of the finest original cast albums ever and sporting one of best musical theater scripts, this is a far harder property than it seems. We’ve seen several productions that have been passable, but none have ever reached the transformative rapture that audiences reported when they saw the 1965 original with Richard Kiley and Joan Diener. But like Cervantes, we live in hope. One asset in its favor: Aldonza is slated to be played by Anna Lise Jensen (Passion, Bridges of Madison County, Fun Home)

Suddenly Last Summer (Island City Stage March 26 – April 26) We saw a truly abysmal production at one of New Orleans “best” theaters a few years ago. This Tennessee Williams almost surreal entry is a challenge, but once again, if anyone can pull this off, it’s Angie Radosh in the central role. 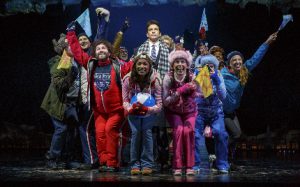 Groundhog Day (Slow Burn Jan. 31–Feb. 16) A major surprise of the 2017 Broadway season was this quite funny and thoroughly charming musical based on – but not trying to copy – the Bill Murray movie. Read our review of the Broadway production: Click here.

Gypsy (Lake Worth Playhouse Jan. 16 – Feb. 2) – Simply one of finest musicals written. We don’t know who will play Mama Rose, but as we observed when the role was cast from out of town in an earlier production, there are a half-dozen actresses locally who could nail it to the wall. Call me if you want a list. Lake Worth Playhouse has earned a hard-won reputation for solid productions of large scale musicals. 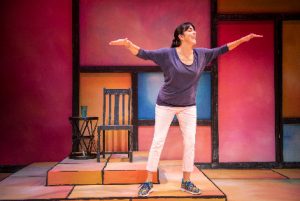 Fuácata! (Actors’ Playhouse July 15 – Aug.  16) Yes, the company is taking on, Camelot, but Elena Maria Garcia’s hilarious but insightful one-woman journey of monologues impersonating the lives of Latina women was a highlight of the 2018 season at Zoetic Stage where Garcia wrote the script with Stuart Meltzer. Welcome back. Read our review of the Zoetic production. Click here.

The Music Man (The Wick Nov. 29 – Dec. 29) This was my first Broadway musical and I got to meet Robert Preston who was impressed that this 8-year-old knew all the words (not what they meant). Harold Hill is fatally miscast so often because, in search of charm and charisma, directors forget that he’s a crook who steals innocent people’s hard-won livelihood and cheats children. It only works when he changes, when he learns something, when he is redeemed by love. Matthew Broderick? Come on. Again, the good news is that Marian the Librarian is set to be performed by Julie Kleiner, one of our region’s best musical actresses. I live in hope.

The Play That Goes Wrong (Kravis Broadway tour Dec. 10-15) Unlike Broadway Across America, which hasn’t got the confidence in Florida taste to bring a play here, the Kravis’ independent scheduling is hosting this entry, the funniest goofball broad-as-I-95 farce since Noises Off. I just saw it a second time, this edition off-Broadway, and even knowing everything that was going to happen, I laughed my posterior off.

The Mystery of Edwin Drood (Maltz Jupiter Theatre Dec. 3 – 19) Just a personal favorite of mine by a really nice guy Rupert Holmes. A gallery of roles for character actors of which (can I put this clearly enough?) there are scores and scores of well-qualified pros working in South Florida who could triumph in these parts. The Maltz usually hires some of the largest orchestras in the region, so the lush score will get a solid treatment.

Fairview (GableStage Sept.  26 – Oct.  25) Is it any surprise that Jackie Sibblies Drury’s 2019 Pulitzer winner — one of the most controversial recent plays about race and which just closed last month in New York — will close out Joe Adler’s coming season?  Coming in a close second on a must-see list is his mounting of Arthur Miller’s classic The Price July 25 – Aug. 23 last done at Dramaworks in 2006 and before that at the Coconut Grove Playhouse.

American Son (Zoetic Stage Jan. 9 – 26) Local playwright Christopher Demos-Brown enjoyed a stunning staged reading of this work in Miami a few years ago with Karen Stephens and Clive Cholerton. Then he saw it open last season on Broadway with Kerry Washington and Stephen Pasquale, another memorable success, which led to it being filmed for a release this November on Netflix. Finally, local audiences will get to see this masterful work for themselves with Stephens and Cholerton.

The list could go on and on: the Mean Girls musical in the Fort Lauderdale national tour; Ordinary Americans, a world premiere production to play at both Dramaworks and GableStage about  blacklisting, starring Beth Dimon as broadcasting pioneer Gertrude Berg; Andy and the Orphans at Primal Forces about a  youngster with Downs Syndrome; Lungs at Lake Worth Playhouse, the intense two-hander tracing a young couple through their relationship that was major triumph at Arts Garage; the Maltz’s comedy The Curious Case of the Curse of Count Dracula; the fledgling Measure For Measure taking on In The Heights; and a raft of new work at Theatre Lab.

This entry was posted in Features, General. Bookmark the permalink.

6 Responses to What To Look Forward To Next Season: Well, Our Opinion