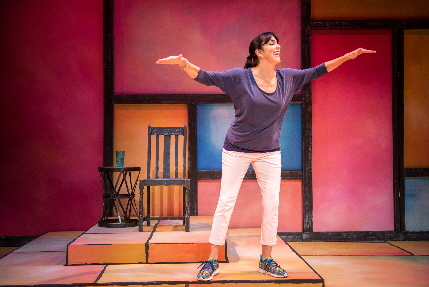 Elena Maria Garcia co-wrote and performs Fuácata! (Or a Latina’s Guide to Surviving the Universe) at Zoetic Stage / Photos by Justin Namon

(This review ran in February 2017 when the show first opened. The production is being produced again by Zoetic Stage at the Arsht Center through Aug. 19)

One genre we rarely see in South Florida theater, common in other art forms, is a celebration of the cultural flavor and zeitgeist unique to the region, especially in English-language works.

That’s because such efforts have to be home-grown. The few that come to mind have been penned by Michael McKeever and Christopher Demos-Brown.

Fuácata! (Or a Latina’s Guide to Surviving the Universe) at Zoetic Stage is both a wildly hilarious and touching expedition through the specific multi-cultural not-so-melting pot that is Greater Miami-Dade. Such shows rarely land well outside their home base because the audience has to supply the context; I know popular lauded ones in San Francisco and New Orleans that fail miserably 30 miles out of town.

And, yes, every moment of the Garcia-Meltzer work is imbued with uniquely 21st Century Miami sights, sounds and peculiarities (the title is local Cuban-American slang for a back-handed slap of a wake up call). The term Latina here accurately reflects our United Nations of heritages including Cuban, Puerto Rican, Mexican and Honduran.

But Fuácata!’s underlying strength is its connection to universal and transportable themes of retaining pride in heritage while finding a place in an assimilated world, coping with this insanely demanding and hectic society, and honoring the resilience of Hispanic women in the face of everything from prejudice to deprivation. As has been observed often in theater, sometimes by depicting something so specific, everybody inexplicably see themselves.

To call Fuácata! a one-woman show would be dead wrong because Garcia’s heroine — the event planner, mother and Super Latina Superwoman Elena Flores — meets two dozen women during the business day we accompany her on. Garcia transforms instantly into those women so that the chameleonic actress is often holding conversations with herself.

But the heart of the work occurs when Garcia steps away from the Flores’ frantic funny odyssey to provide a dozen of the women with a private monologue to the audience that reveals their backstory or inner challenges.

This is most poignant and pointed when Flores rolls down her car window to buy a bottle of water for a dollar from an anonymous down-on-her-luck woman she sees daily on a corner Suddenly, the woman steps outside the action and talks to us: Her name is Marisol and she is a 17-year-old Honduran refugee from a political, social and domestic hell. Her quiet tale of being smuggled through a gauntlet of soul-scourging obstacles is deeply affecting in our current climate. But it also reminds us that every person we pass is a three-dimensional fellow human. These are the stories we read in the newspaper every week, but Marisol’s has profound impact because we hear it out of the mouth of a flesh and blood person.

These revealing interludes are integral to the play, but the majority of the evening is the mirthful work of one of the most gifted funnywomen that this region has been blessed with over the past 20-plus years. The three-time Carbonell winner is melds the manic inventiveness of Robin Williams, the ability to inhabit distinctly multiple personalities akin to Whoopi Goldberg, the endless array of voices of Jonathan Winters, and the inspired physicalization of Lucille Ball. That’s not hype. Anyone can attest to that if they’ve seen her purloining the spotlight in any play she’s been in or portraying a panoply of characters in sketches shows such as Vanguard’s Parallel Lives.

The plot follows the arc of one day as Flores struggles vainly to find her staff of life “cafecito,” juggle a crucial business event that has suddenly mushroomed, and is drafted to chair the International Day food festival at her daughter’s school, Gloria and Emilio Estefan Middle School.

In between, she deals with Miami traffic, a cop giving her a parking ticket, issues with her tradition-bound Mami and a host of all too familiar Miami memes.

In the highlight of the evening, Elena audits the sexually-charged act of Spanish performance artist Graciella that a condo senior wants hired for her 50th wedding anniversary. Posing in ludicrous contortions she thinks are sensual, Graciella plays with the audience and tells how she came on to her perfect lover, an IKEA clerk.

But there’s Beatrice Goldberg, that kvetching condo senior survivor, who brays, “I have survived marriage to my husband Murray, that pain in the ass beside me, for 50 years. 49 of those glorious years I wanted to stab him in the throat with a dull fork.” She later says she had seven boys: “My house looked like an episode of Bonanza.”

There’s Monica, the first-generation Mexican-American mother who brings organic chicken-less matzo ball soup with spinach wantons and Brussels Sprouts to International Day. She confesses to the audience that she “tried very hard to wash my heritage off my skin: I changed my hair color, wore lighter contact lenses, pronounced my name (American-sounding) Monica not (Spanish-sounding) Monica. I even married a ginger husband named Mark… When I walked into my old house, my mother welcomed me with these words: ‘It must be tiresome fighting all the time. But you fight without courage or compassion. You fight with hate and ignorance. A fight like that eventually you will lose.’ ”

Meet Sophie, the Millennial office assistant who judges her dates by the discounts they can score at the employment like Best Buy. She blithely shares, “Look, I’m not like the kind of person that shoots for the stars. That’s way too much work, like way too much planning, way too much of too much. I leave that to the big dreamers, those who want to change the world. I can’t even change a tire. That’s why I have A-A-A. Say what you want, but I’m a realist. I know my limitations. I’m okay with being a C on the grading scale.”

Most obnoxious is Sandy Holmes, the Anglo PTA president with barely-concealed bigotry, whose monologue warns us that immigrants “don’t have the American fighting spirit” and one of her educational goals is “we need to keep the ESOL students separate until they have mastered the English language.”

All this lands solidly in Garcia’s wheelhouse. Her elastic features, her inventive body language, her catalog of voices fuse to create vibrant, easily differentiated characters and all driven by some inexhaustible indefatigable power supply. But doubtless, Meltzer as director molded this into a disciplined work since the show is overflowing with hundreds of lighting and sound effects from Rebecca Montero and Anton Church, executed with precision by stage manager Amy Rauchwerger and technical director B.J. Duncan.

By the way, while the play is shot through with Spanish phrases, Garcia either repeats the line in English or her performance makes the meaning crystal clear.

Buried under the humor, Garcia and Meltzer are like anthropologists reporting on a new country with finely observed glimpses of how people sound and act, and their relationships with strangers and loved one across generations and cultural differences. Maybe it’s the uncomfortable chairs at the Arsht (bring a stadium seat if they’ll let it through security) but the evening does feel like it goes on a tad long. But the authors want to depict and honor the very wide range of women, their motivations and their histories.

The evening ends with an exhausted but fulfilled Elena reflecting on the strength and admirable virtues of the Latina women she has interacted with. This may sound like a Lifetime movie finale, but in fact, Elena has made her case and this is as much benediction as summation.

Fuácata! (Or a Latina’s Guide to Surviving the Universe) from Zoetic Stage as part of the Theater Up Close series performs through March 12 in the Carnival Studio Theater (set up cabaret style) at the Arsht Center’s Ziff Ballet Opera House, 1300 Biscayne Boulevard, Miami. Performances are at 7:30 p.m. Wednesday-Saturday, 4 p.m. Sunday. Tickets are $50-$55. Running time is 90 minutes with no intermission. (305) 949-6722 or www.arshtcenter.org.