Dear Adults: Matilda the Musical Is Much More Than Kids’ Fare 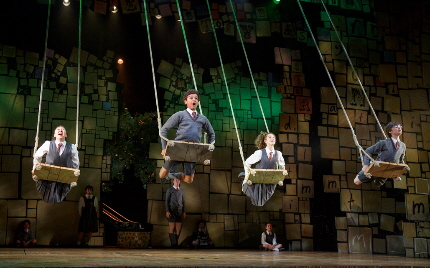 Matilda the Musical, with a national tour that’s made a stop at the Broward Center for the Performing Arts in Fort Lauderdale, may star a cadre of kids, but it is no Annie. I say that in the most positive way possible. The thought of sitting through 2 ½ hours of a children’s show wasn’t on the top of my list, but from the opening number, Matilda zapped that idea right out of my head.

Based on the book by Roald Dahl, the same British children’s author who wrote James and the Giant Peach, and Charlie and the Chocolate Factory, there’s an edginess to Matilda that allows for some deep thinking from adults, while the antics of precocious tykes at a school named Crunchem Hall Elementary will entertain the kiddies.

The star of the story is Matilda, a smarter-than-humanly possible five-year-old, who has parents, the Wormwoods, who couldn’t be more daft, and are so, so mean to the poor dear that it’s a wonder no one’s called the authorities. Luckily, she has a friendly librarian who can’t wait to hear her fantastical stories, and a sweet teacher, ironically named, or maybe not, Miss Honey.

Then there’s the mean old witch – well, not literally – but a headmistress who puts the W in wicked. Run by Miss Trunchbull (first name Agatha), who still relives her days as a 1972 Olympic hammer-throw champion. The school motto, “Bambinatum est maggitum” translates into “Children are maggots,” which gives you the idea. “Trunch,” as the the students  non-lovingly call her, is every school kids’ nightmare.

There’s a lot to learn from Matilda – how if something isn’t “right, you need to put it right.” That it’s mind over matter – most of the time that’s all that’s needed to succeed. Oh, and especially important is that having an imagination is a wondrous thing.

Dahl’s Matilda, like many of his other stories take place in England. The musical production originated with the Royal Shakespeare Company, then moved to London’s West End in 2013, before its successful run on Broadway, and now a hit national tour. As such, the characters are Brits, and so as to make sure we American folks get the references, the Playbill offers a glossary of terms: Telly: shorthand for television. Newt, a lizard-like amphibian. Knackered: Exhausted or severely damaged, which is referenced when used-car salesman Mr. Wormwood tries to sell a bunch automobiles with their odometers rolled back to the Russian Mafia. Surely, this subplot gets more of a laugh than it did when the show originally opened. Credit that to headline news about the recent Presidential election and possible ties to Vladimir Putin. Kids won’t get the fortuitous joke, but their parents will.

Dahl’s books are never Disneylike; there’s an adult darkness to them and Matilda is that perfect example as she tries to figure out the maze of her life, with wisdom beyond her small years. Playwright Dennis Kelly and Australian comedian and musician Tim Minchin, who adapted the book, kept Dahl’s desire for nothing sugar-coated and the common experience of everyone addressing their monsters under the bed.

The monster in this show is bigger than life, and it’s the Trunch. She’s scary, and then some. When the musical was first workshopped, the role was cast as a female. But to have the character bigger than the Big Bad Wolf? Ingenious. Have a man play the role. Now, Trunch is a 6-foot-something-horrible with hairy legs. Drag? That and more.

In the touring production at the Broward Center for the Performing Arts, Dan Chameroy, plays Trunch as the epitome of dastardly. He as she is a bully through and through. And wait until you see Trunch do a forward roll.

The part of the young Matilda is so taxing (she barely leaves the stage for the entire musical) that it takes three different children to play the lead role – they alternate the part on different nights.

Wednesday night audiences were treated to – and I say that wholeheartedly – Jaime MacLean as Matilda, who fearlessly had so many alone moments on stage that you’d never know she was only ten years old. Other Matildas are Gabby Gutierrez and Jenna Weir.

Born-in-Fort Lauderdale and raised in Georgia, Jennifer Bowles, who understudied and played the role of Miss Honey on Broadway, is the one to root for as she stands up with Matilda to take on the evil Trunch and the other villains in the show – the less-than-model parents, the Wormwoods. Bowles plays the role as meek when necessary, but a David to Goliath when Miss Honey needs to roar.

In comically, over-the-top supporting roles are Darcy Stewart as the bleached-blonde doozy of a mother; her versatile dance salsa teacher, Rudolpho, is played by the amazingly limber Stephen Diaz, and Mr. Wormwood, the overbearing buffoon husband is clownishly portrayed by Matt Harrington.

The score is equal parts star. Minchin’s wizardry with words and music is evident in almost every lyric and note, but the most ingenious, and the one to really keep your eyes and ears in focus for is in the first act. “School Song” plays off the letters of the alphabet from A to Z. As large wooden blocks with letters are inserted one by one into different openings in the imposing gates of Trunchbull’s school, each line of the song corresponds to the alphabetical letter, (“So you think you’re A-ble to survive this mess by B-eing a princess or a prince, you will soon C.” And all the way to Z) but it’s so craftily created, enjoy the song without paying attention, and you just might miss it.

That and so much more is what makes Matilda one of those magical musicals that only happens every once in a while.

This entry was posted in Performances, Reviews and tagged Broward Center for the Performing Arts. Bookmark the permalink.