Posted on September 7, 2010 by Bill Hirschman 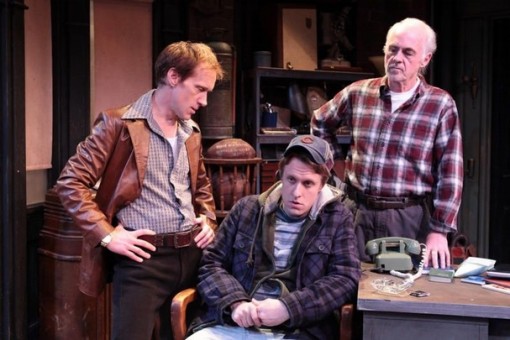 Palm Beach Dramaworks, which has strained for years to escape its vest pocket theater, is close to finalizing a deal to move into the historic Cuillo Centre for the Arts building in downtown West Palm Beach by November 2011.

The city’s Community Redevelopment Agency gave conditional but unanimous approval Tuesday afternoon to buy the facility for about $2.85 million and lease it to Dramaworks for 20 years, theater official said.

The theater will have an option to buy the building from the city during the first six years of the lease. Its board of directors intends to raise the cash in a capital campaign, said Dramaworks chairman of the board Mark Perlberg.

Dramaworks currently operates an 84-seat theater in two adjacent storefronts on Banyan Boulevard about three blocks northwest of the Cuillo. The stage and backstage are so cramped that they limit the scope of the shows that can be mounted, although the productions are famous for beautiful sets and costumes.

The staff will extensively renovate the lobby and auditorium at its own cost. Plans include replacing the 377 stadium-like seats and thrust stage with a conventional 200 seats and a more traditional stage. The goal is to keep the intimate feeling of the Banyan space. Dramaworks also would upgrade lighting, sound and other facets. The work would be completed in phases, the first costing between $700,000 and $800,000, Perlberg said.

The conditional aspect of the deal was unclear Tuesday evening, but the federal government apparently requires 30 days for public comment for CRA deals, said Rena Blades, president and CEO of the Palm Beach County Cultural Council.

Dramaworks, now entering its 11th season at its third venue, has steadily built a following for thought-provoking work, both classical and modern, such as this coming season’s productions of George Bernard Shaw’s Candida and Martin McDonagh’s The Beauty Queen of Leenane.

The theater sold 91 percent of its tickets during the past fiscal year ‘ more than 19,000 tickets for an 84-seat theater, Perlberg said. Several performances have sold out and people have been turned away.

That was one of the reasons for the move: Not only can the Cuillo seat more patrons per performance, it means shows can recoup their costs while reducing the number of weeks that a show must run ‘ and allow other plays to be added to the schedule, Perlberg said.

The CRA and Mayor Lois Frankel have worked several years to keep Dramaworks downtown including earmarking money for a move ‘somewhere.’ In the new space, the Cultural Council estimates that Dramaworks will bring $2.4 million a year in economic impact to the downtown area, Blades said.

‘This is not a grant. This is not a handout,’ she said. ‘It’s a great example of government working hand in hand with business for economic development.’

To ensure taxpayers don’t lose money, the rent for the new space will be somewhat higher and will ramp up as the lease continues. But the opportunity to sell more tickets plus the capital campaign should cover the increase, Perlberg said.

‘We feel this is absolutely something that we can handle successfully,’ he said.

That includes eventually buying the property. While that goal might seem optimistic during a recession, Dramaworks has earned a reputation for careful financial management under producing artistic director William Hayes, managing director Sue Ellen Beryl and company director Nanique Gheridian. Additionally, the theater has focused on fund-raising for years, even hiring development staffers.

The new facility at the east end of Clematis Street was once the flagship in the ABC- Florida State Theaters cinema chain. It was converted in 1981 to become The Stage Company of the Palm Beaches, a for-profit regional theater that went broke in 1983.

Some of its officers and actors reopened it as the Florida Repertory Theatre in 1983 until the economy shut it down February 1991.

Entrepreneur Robert Cuillo bought it and renovated it in 1999. The newly-christened Cuillo Centre for the Arts became one of the rare for-profit theaters in the region. It included a small theater in the mezzanine and a large auditorium downstairs with an unusual design: steeply-raked tiers of seats like an operating theater surrounding a protruding stage on three sides.

The Cuillo featured productions sporadically in recent years, although its last high-profile production was the pre-Broadway tryout of Valerie Harper’s star turn as Tallulah Bankhead in Looped in December 2008.

Its answering machine currently says the theater is closed for the summer. Its large picture windows have been covered with brown wrapping paper throughout the summer and the marquee proclaimed ‘For Rent.’