Posted on December 1, 2010 by Bill Hirschman 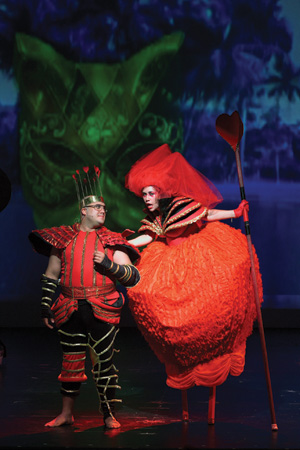 The PlayGround Theatre's current production is "Alice's Adventures in Wonderland."

The PlayGround Theatre in Miami Shores, known for its lush and imaginative productions for children, has received a $100,000 matching grant this week from the John S. And James L. Knight Foundation to help produce the world premiere of a show inspired by ancient Chinese folktales.

The Red Thread will be presented April 13 through May 27 at the theater at 9806 NE 2nd Avenue.

The check is one of 27 Knight grants announced this week totaling $3.8 million. Recipients ranged from the Florida Grand Opera to the Palm Beach Poetry Festival. PlayGround is well-known in the area for its significant support for corporate donors and individuals.

The new play has been under development for two years by artistic director Stephanie Ansin and Fernando Calzadilla who are writing and designing the show, said Liz Roldan, director of marketing.

The company describes the plot as ‘a young woman’s heroic efforts to rescue her father’s miraculous masterpiece. Her ensuing adventures challenge her mind, body, and spirit, and ultimately bring her true love, inner strength, and a glorious reunion.’

An estimated 16,000 invited children, teachers, family members and others will attend 62 performances, but it will also be open to the public.

The grant will also allow the theater staff to produce study guides online and in the theater as well as help teachers present pre- and post-performance classroom activities. The theater also will conduct workshops with PlayGround actors in schools, parks and community events to introduce students to live theater and create interest in PlayGround productions.

Since 2004, PlayGround has produced nine shows for children and families, notable for their production values and stunning visual design, seen in photos on their website theplaygroundtheatre.com. Besides staging shows in their theater, the company sponsors outreach and educational programs inside schools. Their current show running through Dec. 19 is an updated Alice’s Adventures in Wonderland featuring projections and rock music.

Other Knight winners include: