Attend the Tale Once Again of Sweeney Todd at PPTOPA 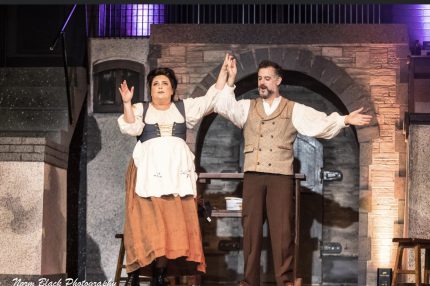 Britte Steele as Mrs. Lovett and Ben Sandomir as the title throat slicer celebrate their partnership in Sweeney Todd at Pembroke Pines Theatre of the Performing Arts

In the Stephen Sondheim canon, the masterpiece Sweeney Todd is one of his most popular pieces favored by producers in New York City revivals, opera companies, staged concerts, regional theaters – two local outings in recent years. Heck, Area Stage’s Conservatory in Miami is mounting a Sweeney Jr. later this year.

But the complexity of the 1979 work — from tongue-twisting lyrics to an often breakneck score to Hugh Wheeler’s fine script — all of that is far, far more difficult to master than most civilians appreciate.

So render props to Pembroke Pines Theatre of the Performing Arts’ respectable production, which features some engaging performances, some quite fine voices and an earnestness of artists clearly filling items on their bucket list.

It’s not a superior production, true, but it’s yet another admirable step up in quality as the troupe steadily evolves from an ambitious community theater into a full-fledged professional company worthy of checking out with each new show.

For those living in lower Slobovia for the past 45 years, Sweeney Todd is rooted in a British 1840’s serial killer tale used by mothers to frighten disobedient children.

Based on a 1973 play investing psychological and motive underpinnings, this version tracks Benjamin Barker, a barber whose wife was raped by a judge who ordered Barker jailed in Australia. Barker has slipped back into London under this new name Todd with murderous revenge on his mind because he believes his wife is dead and their now teenage daughter is the ward of the lustful judge.

Todd sets up his tonsorial parlor above the pie shop of the amorous Mrs. Lovett who is having trouble finding meat for her pies. When he starts slicing throats, the ever-practical Mrs. Lovett realizes they both can benefit because she can use the bodies as a source of…. well, you know.

Director Amy London has been faithful to the required vision of what the Brits call a “penny-dreadful” melodrama, but also to the underlying revenge tragedy that keeps the audience from simply seeing this as a tongue-in-cheek cartoon.

Particularly impressive is the musical direction by veteran Eric Alsford and the resulting work from his cast. Much of Sondheim’s work is infamous among musical theater artists for being very difficult to nail with its torrent of verbiage, its rhythms changing mid-sentence let alone mid-song and a half-dozen other technical challenges.

First, he has elicited an unusually rich full sound to the soloists and the chorus often equal to the lush digitized sound tracks. Second, he has everyone hit the sadistically intertwining musical lines with surprising precision. Third, the cast enunciates lyrics so clearly that in the notoriously intertwining duets, there are lyrics you might not have heard clearly before.

Whether it’s Alsford or the enthusiasm of and commitment of the cast, there are solid artists you heard often in other shows (naming just one, Michael Cartwright here as the corrupt Judge Turpin) who surprise with the fine quality of their vocal performance here.

But this is backing into the quality of the two leads, local veteran Ben Sandomir as a deeply brooding Todd and Britte Steele as a gloriously amoral and uber-practical Mrs. Lovett.

Sandomir, who has played Jekyll and Hyde, reaffirmed his status as a leading man this year as the anchoring brother in PPTOPA’s Something Rotten. Here, he delivers an especially resonant full voice to Sweeney that has a touch of menace as he intones his love song to his instruments of murder in “My Friends.” He seemed a bit too tamped down in the early scenes even given the character’s internally consuming obsession. But when he let loose later, he created a Sweeney you needed to avoid if you valued your health.

Steele, who has worked locally somewhat as well as nationally, is the gift of the production. Without ever echoing the late Angela Lansbury or anyone else who has done the role, she soars as the chatty ebullient neighbor next door whose cross between amorality and practicality just happens to inspire her to boost business with Sweeney’s customers. Her hoydenish entrepreneur sashays the stage with a joy of being alive.

What is amazing is how smoothly and succinctly and hilariously she delivers Nellie Lovett’s rapid-fire songs like the “The Worst Pies in London” or her endearing dream of a better life with Todd in “By the Sea” in which she calls out “Yoo-hoo” in a way that is comical in itself. It should be noted that some productions allow Nellie to slow down the tempo a bit. Not here.

While the characters’ affection is solely one direction, the two actors join perfectly for the famed one-act closer “A Little Priest.”

Eytan Deray, an actor-playwright from the recent success Educating Asher, creates the slightly demented Tobias as a confused child whose life had taught him to always expect to be hit. Deray is always deep in character even when he is racing around the pie shop trying to help out in the manic “God, That’s Good.”

Save some applause for Bob Ruggles (Will in Something Rotten) as the naïf Anthony Hope; Jeffrey O’Neill as Beadle Bamford; Kate Delaney as the Beggar Woman; Diego Pfeiffer as Pirelli; the aforementioned Cartwright, and special note for Mikayla Cohen, who may have the most facile voice in the cast as Joanna as she trills through “Green Finch, Linnet Bird.”

The cast, London and Alsford deserve extra credit for something rarely noticed. Wheeler’s dialogue is woven inside many of the songs, so there is underscoring music while people are speaking. Because the cast is performing to pre-recorded music (perhaps slightly altered by Alsford), they must perform those lines come hell or high water precisely before the next line of sung lyric begins.

Other aspects of the PPTOPA production are varied. The costumes do a good job portraying the many social groups. The sound quality and balance, once miserable in this city-owned venue, is wonderfully clear outside of a few microphone crackles; the voices are not overwhelmed by the digitized music.

But one element is so poor that it has to be mentioned. The lighting is abysmal. There may be multiple reasons, inside or outside the company’s control. We know that the intent was to create a dark dank atmosphere, but this was distractingly infuriating.

First, someone needs to gift this company some additional lighting units because there are parts of the stage that don’t appear lit at all. Sometimes actors’ bottom halves are lit while not their top halves. Or one character is lit and the other is not. Sometimes people are just performing in the dark. The chorus, performing the musical storytelling, sometimes can barely be seen at all. I guess to make them anonymous? And a personal bugaboo that likely dates back to the 1930s: When someone is center stage singing a solo or a duet, it doesn’t matter about that dark environmental atmosphere; they are suddenly flooded with a bright white spotlight that destroys any mood.

This is a long show that London keeps moving at an admirably rapid pace. Still, fans of even the finest productions acknowledge that the last 15 minutes or so get a little muddled.

Other productions have emphasized other facets: Harold Prince’s famed Broadway debut contained a significant comment on the socio-economic injustices of the Industrial Revolution. Others have leaned heavily on the dark humor.

This one is more straight-forward a tale for Halloween. But it’s hard to ignore Sondheim’s far too prescient lyric that echoes in this tense time of eruptions of seemingly senseless violence:

Hearing the music that nobody hears….
He never forgets and he never forgives
Perhaps today you gave a nod
To Sweeney Todd

Sweeney Todd by the Pembroke Pines Theatre of the Performing Arts plays through Nov. 6 at the Susan B. Katz Theater of the Performing Arts at the River of Grass ArtsPark, 17195 Sheridan Street. Performances 8 p.m. Friday-Saturday, 2 p.m. Saturday-Sunday. Running time 2 hours 45 minutes including one intermission. Tickets generally $25-$35. For more information visit www.pptopa.com or call (954) 437-4884.