Posted on February 9, 2022 by Bill Hirschman 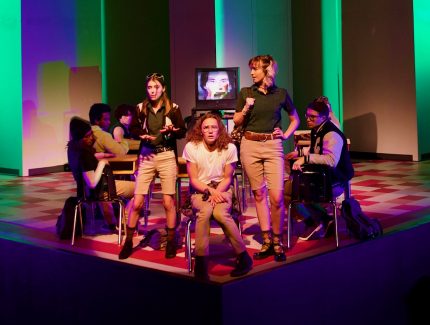 It’s hard for post-Boomer generations to fully imagine the overarching cultural norm before 1962, when DC Comics ruled their cherished world of superheroes whose primary problems outside of Earth-threatening monsters and Kryptonite were keeping their girlfriends from recognizing them when they wore glasses and slicked back a cowlick.

But in 1962, Marvel’s Stan Lee and Steve Ditko created an everyday teenager dealing with an ever-increasingly serious arc of all-too-relatable issues for its readers: bullying, crushes on girls, family issues, secrets they could tell no one else, feeling like an outsider, being misunderstood, misunderstanding, economic disadvantages, responsibility to community and above all, a search for the answers to the questions “who am I” and “do I have worth”? Everything except acne.

Peter Parker, not Spiderman, revolutionized a major branch of pop culture that only a handful of mass fiction writers had explored over the prior decades (well, Shakespeare’s R&J and Hamlet, of course). Teenagers now spent their discretionary income (called “allowance”) on something that re-told the secret story of their private lives, not the esoteric travails of Kal-El and Bruce Wayne. It proved that a previously-unimagined commercial opportunity existed beyond the already lucrative market for Davy Crockett hats and Barbie dolls.

Sixty years later (can it be 60 years?), we find that so ingrained in the DNA of modern Western popular culture that now we come to the intriguing but notably flawed musical Be More Chill from Area Stage Company in Miami—a troupe known for youth-oriented titles produced with trope-shattering imaginative theatricality through its wunderkind associate artistic director, Giancarlo Rodaz.

The premise is a slightly sci-fi fantasy about a nerdy outsider Jeremy Heere who is told by a bully that his problems will ease if he takes a pill termed Super Quantum Unit Intel Processor— “SQUIP.” It implants a computer inside the user’s brain and coaches him through the daily social challenges of the hell known as high school. He joins the cast of the school play  A Midsummer Night’s Dream set in a post-apocalyptic future, re-titled A Midsummer Nightmare (About Zombies) so that he can pursue his crush on a girl.

He indeed changes his behavior, but it turns him into not such a nice guy. Analysts have noted SQUIP’s resemblance to a pharmacy of drugs including Adderall. But SQUIP has plans to have enough kids take the pill so that he and his brethren can take over the world—echoing Little Shop of Horrors with a bit of Dear Evan Hansen thrown in.

With broad humor, witty lyrics and a passable pop-rock score by Joe Iconis, Be More Chill began as a work commissioned by a New Jersey regional theater in 2015. It might have died then and there if its author had not put together a cast album and then hawked it over the Internet. Its tale reverberated with the teenage zeitgeist – eventually procuring more than 300 million downloads, encouraging an off-Broadway run, a five-month stay on Broadway, a company on the West End in London and countless productions in high schools, colleges and regional theaters seeking to build a younger audience.

Playing now in Area Stage’s new home in the Arsht Center’s Carnival Studio, this edition is sometimes entertaining, but not thematically deeper than “adolescence sucks and we should listen to our own sense of self-worth rather than the cacophony of false voices around us.” The show has been a raging success primarily because — with tongue mockingly deeply in cheek yet with sympathetic compassion — it resonates with what its target audience of gamers is going through. But if older patrons re-open memories of that time, virtually anyone of any age can hear echoes of the fears, pains and dreams that have molded their adult lives.

It plugs immediately into the eternal angst of teenagers struggling in high school where nearly everyone secretly believes they are really outsiders – even the football captain and prom queen. But in classic 21st Century pop zeitgeist, such instantly recognizable tenets exist in a world touched by science-fiction and comic-book fantasy that no expects you to mistake for naturalistic real-life.

The whimsical tone may be most easily seen in off-beat scenes. Jeremy’s dad has had trouble dealing with his wife leaving, manifesting it by not leaving the house and going around the abode without pants. When Jeremy’s BFF Michael enlists him in saving his son from the SQUIP, they sing the duet “Situation is grave / Now’s the time to be brave / I’m gonna finally make that climb / One leg at a time! / When you love somebody / You put your pants on for them!”

Rodaz’s staging is always enhanced with little “better watch sharp” notes. When Jeremy is struggling with the inner voice of the SQUIP and his own conscience, he whips his long mane back and forth like the hero/villain in Frank Wildhorn’s melodrama musical Jekyll/Hyde.

This may sound almost ludicrously childish like a silly ABC afterschool special and it is meant to be drolly satirical. But the life lessons underneath are genuine about longing for acceptance, being true to yourself, etc.

The teenage verbiage and observations are comical and painfully accurate, but doesn’t dive much deeper. Here, from the opening song as our hero boots up his laptop before going to school:

While Boomers and older theater goers probably only read about it in The New York Times, Be More Chill’s mega-explosion in popularity among Gen X,Y and Z has once again proven that the right theater piece directly addressing the right issues in the right way will make rabid fans of a large swath of coming generations. For further proof, note who is seeing Wicked and Evan for the sixth and seventh time. And then there’s that Hamilton.

Rodaz’s casting also has some admirable revelatory performances and some surprisingly flawed ones. The quality of singing and acting ranges from impressive to almost but not quite adequate.

The range on display: For instance, Aaron Hagos shines as the hero’s friend and he proves to have one of the best acting/singing voices in the cast with the most emotionally honest number of the night “Michael in the Bathroom.” We want to see more of his work down here.

But as the lead, Teddy Calvin does only a reasonable job charting Jeremy’s evolution from a hunched over, glasses-wearing self-described “loser” to someone whose demeanor depicts a modicum of newly-won confidence. The real problem is that his singing voice isn’t up to the challenges of the score, least of all in the higher register. Perhaps the flat notes, the missed notes were an intentional manifestation of Jeremy’s ineptness, but it doesn’t come across that way.

Yet, then there’s Rachel Barsness whose lovely voice and engaging demeanor make her heroine another highlight whenever she stops to sing of the angst she’s wrestling with.

But then, in a really strange call, “The SQUIP” appears solely as a face on a classroom TV set (hilariously manifested as Max Headroom-like static-marred Keanu Reeves face circa Bill & Ted). But the voiceover by Frank Montoto crucially lacks any of the menace, seductiveness or manipulative wiles that you would assume our villain would have. (Again, think the plant in Little Shop of Horrors.)

And as far enunciation, easily a quarter, perhaps a third of the Joe Iconis’ lyrics were simply unintelligible, a significant loss since the ones that we could understand were really agile and amusing.

What the troupe has in is asset column is every cast member’s commitment to inhabiting the honest emotions raging under the intentionally cartoon-like characters. The actors are having a great time and their delight is infectious, especially Luke Surretsky as the over-the-top bully who goes bonkers as the first to suffer under the SQUIP’s sway. His stage mates include Michael Vadnal, Zachary Prall, Katie Duerr, Harley Muir, Jennifer Molson, Enzo Everett and Jorge Amador.

Frank J. Oliva, a Miami scenic designer who has worked in NYC, imagined a classic institutionalized classroom with fluorescent lights, tiled floor and the usual plastic and metal tubed desks. Plus, he and Rodaz have provided tall white walls that close in when characters begin to feel trapped by the deteriorating circumstances.

The sound department includes low ominous electronic rumbling, but it took the folks in the sound booth considerable time to get some actors’ unreliable voices steadily audible.

The lighting was especially problematic. In a valiant attempt to create different locations and enhance moods, Cheyenne Sykes makes numerous choices that don’t land. For instance, characters are speaking and singing in the darkness and then spotlit a few verses into a song. This goes especially awry when a human character in half-darkness is supposed to be speaking with the voice of the computer coming from inside them, but you can’t see their mouth moving in the gloom.

Since the entire thing is pretty obvious in its spine and narrative, the evening runs a good 20 minutes longer than necessary. But if you’re the target audience and you’re just looking for a hoot, you might not mind a whit.

Covid protocol: Masks required in the lobby and auditorium. Proof of vaccination or recent testing must be shown at the door along with ID before security wanding. The totally non-paper ticketing means that tickets are sent by email or text to your phone (even if you get them from the box office) and that electronic ticket is what must be shown to the ticket scanners at the door; they cannot scan a paper printout.

Note 1: If it’s been a while since you’ve been to the Arsht, much of the closest parking has been shuttered and co-opted for construction.  Further, driving to and from the Arsht from I-95 via I-395 is a nightmare of corkscrews. Allow extra time for travel. Parking options and directions are spelled out on the Arsht’s website at https://www.arshtcenter.org/en/Visit/Parking-And-Traffic/.

Note 2: I know I’ve printed this twice before, but…..Once again, the Arsht has declined to give out playbills (Covid? Cost-savings?) and resorted to asking people to scan a QR Code on their phone (assuming they brought one and have any idea how to work a QR code) to see who’s playing who and who designed those terrific costumes. So to repeat the editorial comment we wrote about this last time:

I hate, absolutely hate the new trend of forcing technology-impaired people like myself to attempt – not succeed, but attempt – to download the only available playbill on a cellphone. First, not all of us are cyber-adept. Second, you can’t check the cast list during the performance when you ask “who is that actor.”  Third, you are more likely to “forget” to turn off you phone when the lights go down because you were reading the playbill. Fourth, most theater lovers who have been going to shows way back in 2019 treasure the physical playbills as a souvenir they keep for decades — which given ticket prices these days is the least producers can give you. And just for what it’s worth, Actors Equity is not requiring this move as anti-COVID measure.