Once On This Island Is Glorious Tale of Storytelling And Song

Posted on February 7, 2022 by Bill Hirschman 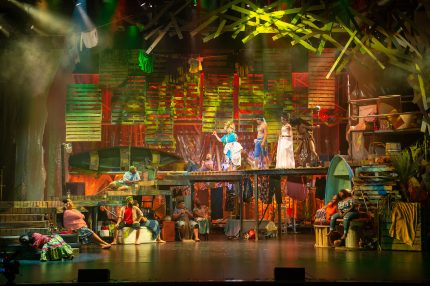 Wordle can wait. Turn off the third rerun of The Real Housewives of Wichita, Kansas.

Really. Stop. Go buy tickets for you and a close friend, some extra tickets if you have children who thought Annie Live! on television was giving Broadway musicals a chance.

Get yourself down to the Broward Center where Slow Burn Theatre Company is delivering you a gift you’ll prize for a long time to come: Once On This Island is a glorious evening of storytelling and song, myth and magic infused with joy, passion and a deep belief that love is the saving grace of complex human existence.

Yes, Slow Burn has earned a reputation for above average, reliably entertaining works. Some are better than others, and sometimes the founders tackle shows they love that they know are inherently flawed.

But every couple of seasons, they smash the theatrical equivalent of a home run out of the Amaturo Theatre, out over the New River and last seen vanishing over the horizon at the beach. Its Once On This Island – enchanting is a precisely apt adjective — is such a triumph.

It takes hold from the opening moment of gale winds and warning sirens, as vibrant denizens of a Caribbean fishing community huddle together from an impending hurricane in the French Antilles.

They pass the time of danger by ecstatically singing, dancing and retelling the legend of Ti Moune, an impoverished but spirited dark-skinned orphaned peasant who falls in love with a wealthy young mulatto scion, Daniel Beauxhomme from the other side of the island and the strict social strata.

She has nursed him from the brink of death in a car accident. Her ensuing quest for true love is aided and threatened by the island’s Gods of Water, Earth, Love and Death who use Ti Moune as a test case whether love is stronger than death

To save Daniel, Ti Moune must pledge her life for his, to be collected by the Gods at a later date. When he cruelly snubs her for someone in his social circle, she pines outside his mansion gates until she dies in adoration rather than let Death reclaim him. But the Gods claim her inspirational spirit and turn her into a tree that rips down the gates. In the end, the community celebrates how love, indeed, prevails and can change the world around us. The coda swells into an uplifting and exhilarating finale. While children will be hypnotized by the pageantry, the story that touches on classism and racism is not the Disney-like trope it sounds like on paper, but a gentle allegory with a moral meant for us living in a harsher reality.

Pulsing through the tale is a nearly non-stop score of Calypso and salsa and thundering tribal music that is alternately touching and rousing, propelling the company through choreography for which the word exuberant does not do justice.

Slow Burn Artistic Director Patrick Fitzwater has melded a creative team’s superb acting, his own staging, lighting, set design, costuming and sound. The artistic fusion culminates in the show’s final moments in a visual and aural “coup de theatré” that you simply cannot find equaled in any other art form. His attention to atmosphere-enhancing details reaches down to passing grace notes like a series of abandoned umbrellas indicative of the upper crust being paraded across the stage although no cloth covers the twirling ribs.

Integral in every other scene is a wide variety of Caribbean dances designed by Jerel Brown, especially a powerful pounding “Mama Will Provide” and Ti Moune’s central dance before Daniel’s peers. Brown, a longtime member of Slow Burn’s ensemble, gets ample opportunity to exhibit his command over the specific qualities of the region’s terpsichorean tropes.

This 1990 work premiered off-Broadway then moved to Broadway where it became the first starring theater role for LaChanze. Inspired by the 1985 novel by Rosa Guy, the book and lyrics were penned by Lynn Ahrens and the score by her regular collaborator Stephen Flaherty, years prior to their successes in Ragtime and Seussical. The original production earned eight Tony nominations for its Broadway run, including Best Musical, Book and Score. A 2017 revival won the Tony Award for Best Revival of a Musical. 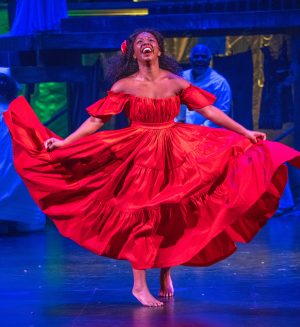 If there is a second headline, it’s the local discovery of Brinie Wallace as a radiant vibrant Ti Moune. She shares with us an inner beauty, soaring voice, expressive face and lithe dance moves that range from slow sensuality to wild abandon as Ti Moune entices the aristocrats at Daniel’s introductory ball to join in an explosion of fervent release. This diminutive Denver-based alto-soprano has some experience in ensembles and secondary roles, but she leaves no doubt she has the powerful appealing chops to take the lead in mainstream musicals. We look forward to seeing her in more work down here.

For the others in the troupe, I want to write “special praise goes to so and so for such and such a number” but it would take another page or two to describe their special moments because the entire company is that good. Every onstage performer, every last one in the ensemble, has a strong voice spot lit in one or more numbers. As actors, they never stop reacting to the events unfolding before them even if the focus is nowhere near them. This might be a Fitzwater trait because the same element could be found in many of the recent productions that Slow Burn has mounted.

So count yourself lucky see to Jade Jones and Geoffrey Short as Ti Moune’s adoptive parents; Jemarcus Riggins as Daniel; Kareema Khouri as Asaka, the mother goddess of Earth; Lillie Thomas as the goddess of love Erzulie; Nate Promkul as Agwe, the god of water; and Elijah Word, fresh off his stunning turn in Kinky Boots, now the demon bringer of death, Papa Ge. But seriously, save your applause for all the ensemble members who take on a score of roles: André Russell, Daryl Patrice, Jasmine Iacullo, Nayomi Braaf, Nicole Dikun, Reynel Reynaldo and Jerel Brown again. The young girl who was to have played Little T Moune took ill and was replaced with a three-hour rehearsal by Chloe Davis. The script was adjusted to help the last-minute volunteer rescue, but she charmed this weekend’s audiences.

Creating this magical environment is crucial, so Fitzwater and Assistant Director Marlo Rodriguez had the company cavort over Cliff Price’s evocation of a poor fishing village bedecked with old wooden loading pallets, and augmented as the tale progresses with castaway furniture, palm fronds, drapes and Jameelah Bailey’s “found at the scene” props, all of which ignore the proscenium and slip into the opera boxes.

An array of moods and locations, but especially the magical feel of the piece, was enhanced by George Jackson’s lighting. Execution of the technical achievements was overseen by Alex Fine and the production encompassing a couple hundred cues was supervised by Production Stage Manager Jackie Lawlor.

Further enveloping the story, the characters and the audience were the contributions of Leonora Nikitin whose costumes – from peasant skirts to “jeweled” gowns — were awash with color and character, but always seemed as if they had been made by the storytellers. The Gods were adorned with otherworldly makeup designed by Stephanie Loverde.

Throbbing music suffuses almost every moment of the 90-minute evening; the lush tracks executed by a live orchestra are from The MT Pit company, and the entire musical component was directed by Eden Marte.

There are some overlapping ironies and matters of note here. This tale rooted in Afro-Caribbean culture has music, lyrics and book by ultra-talented but white artists with a reputation for delving deeply into subjects requiring research.

February is Black History Month and theaters around the country, including here, have been gently chided for traditionally ghettoing black-centric work during that period. But Fitzpatrick has been a deep fan of this work nearly since childhood and has always wanted to mount it.

Further, theaters across the country, again with South Florida companies being included, have caught significant criticism post-George Floyd for the way the titles are chosen, a lack of diversity on stage and backstage, and even unintentional micro-aggressions during rehearsals.

But without trumpeting it, artistic directors across this region including Fitzwater and co-founder Matthew Korinko have spent a good deal of time over the past two years taking consciousness-raising courses, attending conferences and discussing in depth among themselves how the local paradigms could be changed. Besides an all-black cast, several key players among the designers and production workers represent the diversity of this region.

In total, Once On This Island is a thrilling evening for both veteran lovers of theater and newcomers wondering what all the ado is about.

Once On This Island from Slow Burn Theatre runs through February 20 with performances Tuesday through Saturday evenings at 7:30 p.m., Sundays, 6:30 p.m.; Saturday and Sunday matinees at 1 p.m. Performing at the Amaturo Theater, Broward Center For The Performing Arts, 201 SW 5th Ave., Fort Lauderdale. Running time 90 minutes, no intermission. Tickets start at $49. Available online at  BrowardCenter.org, or Ticketmaster.com; by phone at 954.462.0222.

COVID PROTOCOL: Masks required in lobby and auditorium. Tickets, even those bought at the box office, are supplied through email and texts. Outside the theater, staff checks for both ID and proof of vaccination or recent COVID test. Then a green wrist bracelet is attached before entry and security wands for weapons. Printed playbills are available but also can be downloaded. Drinks and snacks available. 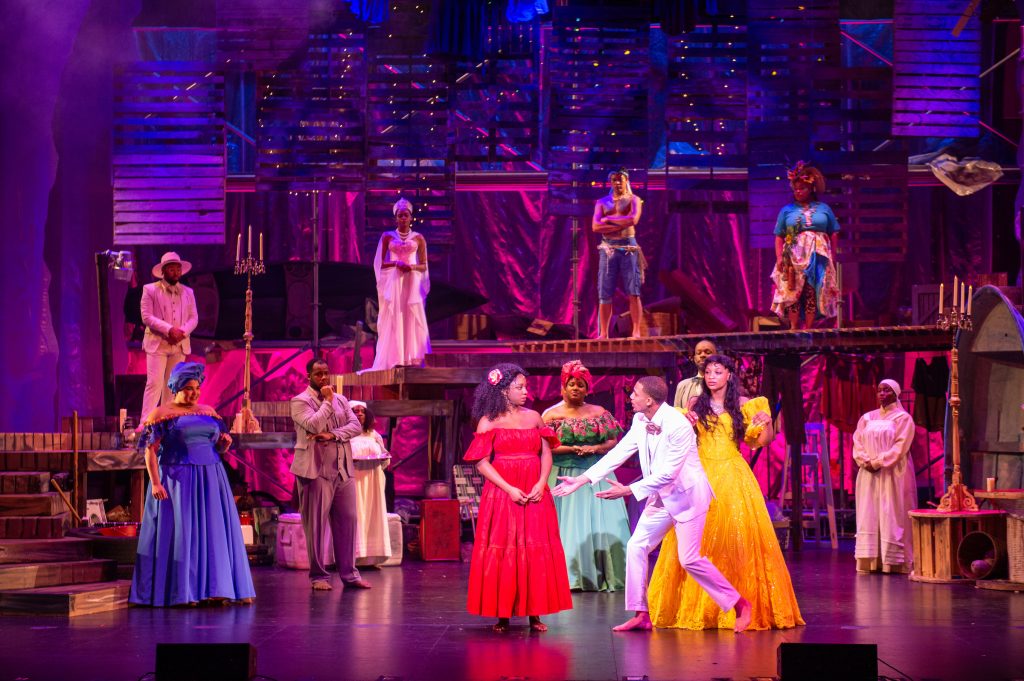