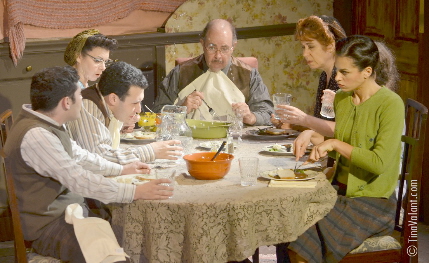 If you own a theatre with an older demographic, you will do Neil Simon. It’s not only a mantra, it’s good business. Simon plays make the audience happy, they make money, so it makes sense.

The hard part, of course, is doing Neil Simon well. Simon plays come with some baggage, because most of the audience is old enough to have either seen past productions or the movies based on the plays. There is always the risk of comparison from the audience, or copycat performances from the cast.

The Plaza Theatre in Manalapan does not fall into that trap. They do Neil Simon very, very well.  Earlier this year the Plaza produced a fine production of Simon’s Chapter Two, and now they’ve raised the Simon bar with their current show, Brighton Beach Memoirs.

This is the second production of Neil Simon’s autobiographical play in South Florida this year; Broward Stage Door Theatre in Coral Springs boasted a fine production of the play this past summer. It’s not surprising that Brighton Beach Memoirs is that popular. Aside from the durability and brand name that is Neil Simon, this is a funny play with believable characters that manages to warm the heart without manipulating it.

When we first meet Eugene, it’s 1937 and he’s a not-quite 15-year-old Jewish kid in Brooklyn whose aspirations include being recruited by the New York Yankees, becoming a professional writer, and seeing a naked girl eat ice cream.  Eugene lives a few blocks from the beach in Brooklyn with his parents, Jack and Kate, his older brother Stanley, his widowed aunt Blanche, his older cousin Nora and younger cousin Laurie.

The Jerome household is over-crowded, but they are a family — they fight, they laugh, and they get over-involved in each other’s lives.

Simon casts Eugene as the observer of his family’s foibles: Stanley’s ethical quandary at work, Nora’s big show business dreams, Laurie’s health issues, Blanche’s dependence, Jack’s struggle to make ends meet and Kate’s overbearing concern. Nothing much happens — Brighton Beach Memoirs is not plot-driven but rather a snapshot of a family whose love and bond will always overcome.

The Plaza Theatre’s production directed by Andy Rogow features true-to-life performances — watching them is like peeking through a neighbor’s window.

Jessica K. Peterson and Michael H. Small deliver stunningly authentic performances as Kate and Jack. They have chemistry and are completely believable as the matriarch and patriarch of the Jerome family. Their scenes together imply a romance that’s still alive, despite the way life has beaten them down.

Jacqueline Laggy, who plays Blanche, is also a standout.  In Laggy’s hands, Blanche’s transformation from mousey widow to confident single mom is natural and quietly triumphant.

Eva Gluck plays Laurie with an element of slyness, while Blaze Powers brings the right amount of teenage angst to Nora.

Noah Jacobson brings some swagger to Stanley, while Ryan Mahannah delivers the right combination of teenage wonder and cynicism to Eugene.  Unfortunately, Mahannah and Jacobson were still flubbing their lines during the first Saturday matinee, but this aspect of their performances should improve over time.

Michael McLain’s scenic design makes use of every bit of the Plaza’s stage and underscores the overcrowded Jerome household.  Peter Lovello’s costumes don’t always feel period-perfect, but for the most part, they work.

Even if you’ve seen Brighton Beach Memoirs, the fine performances in this production make this a play worth seeing again.