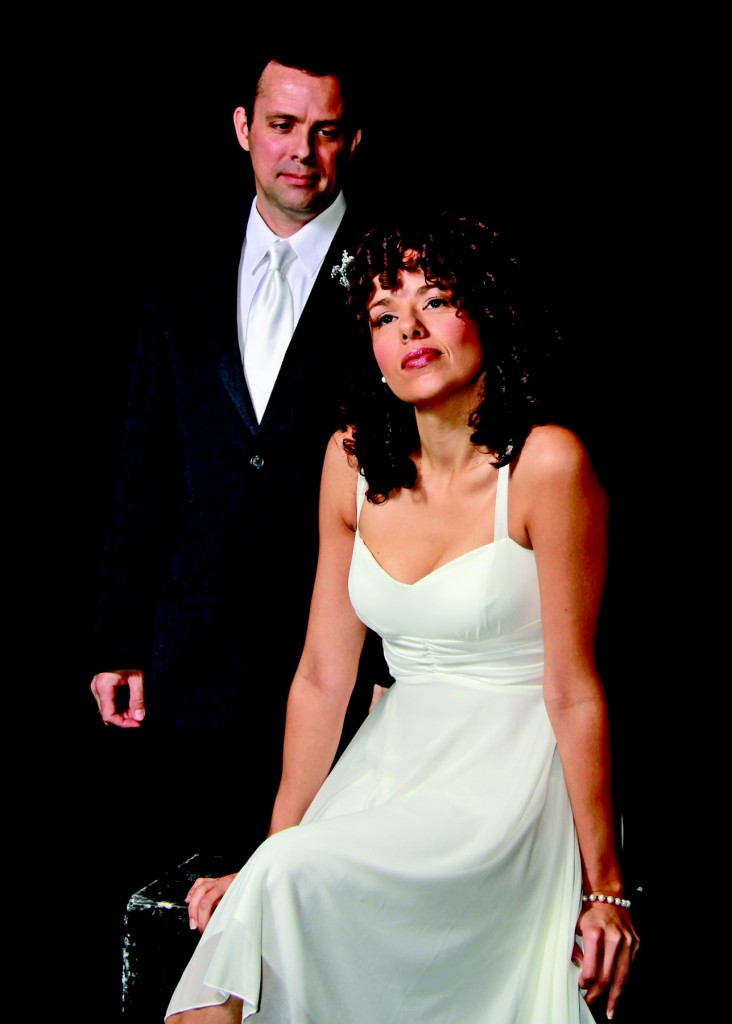 Christopher A. Kent and Janet Dacal in The Last Five Years

One fascinating aspect of Facebook is how it reflects at any single moment the array of birth and death, triumph and disappointment, and especially joy and heartbreak of romance — all co-existing at the same time.

But the reason to see it is the vibrant, bravura performance by former Miamian and current Broadway actress Janet Dacal.

God or luck bestows talent and there are scores of performers in South Florida blessed with considerable vocal gifts. What Dacal illustrates here is what happens when the performer labors to develop those gifts through study, practice and discipline. She has a clarion belt strong enough to push the back wall of the theater a few feet further out. But it’s the technique and polish, the phrasing and variety that she brings to that power that makes her an actress who sings as well as a singer who gets an acting gig.

Her colleague on stage is the engagingly earnest Christopher A. Kent, an Actors Playhouse veteran whose warm baritone wrings heartfelt emotion out of Brown’s difficult score. But his singing style is different than Dacal’s (and she gets the best songs), so it’s not cause for shame that Dacal blows him away for those making unfair comparisons.

Brown, inspired by his own marital dissolution, wrote a tale of boy-meet-girl, boy-loses-girl notable for its familiar but incisive observations. The primarily sung-through musical charts the relationship arc from the separate viewpoints of the man and woman who have alternating solo songs. But that unique yin and yang element is that the man tells the story in chronological order; the woman in reverse chronological order. Therefore, that joy and heartbreak are always in juxtaposition. This underscores how these this union, forged from such love, has the seeds of disintegration in it from the start.

The characters/actors only directly interact with each other in the middle of the show when the man proposes to the woman and they marry under a chupa, coincidentally the loveliest moment of the evening musically, lyrically and emotionally. Other than that, director David Arisco faithfully allows them only to be silent figures being sung to in a half-light, with their backs to the audience, almost a memory in the mind of the singer. Given that inherent obstacle, it probably helps the actors’ chemistry a little that they played together in the Playhouse’s Five Course Love in 2006.

It’s essential that audiences know about this structure for the proceedings to make sense and whoever makes the pre-show curtain speech would be wise to make this crystal clear every single night.

Dacal plays Catherine Hiatt, a talented but frustrated actress, who starts the show in the depths of sorrow after finding her husband’s goodbye note and wedding ring on a table, expressed in the song “Still Hurting.” Kent plays Jamie Wellerstein, who starts the show as an ebullient rising novelist singing about the woman he has just met in “Shiksa Goddess.”

Brown’s music sounds on the surface like standard pop ballads and anthems, but they are far more complex, encompassing jazz , rock, folk, even klezmer. The score is strewn with deceptively difficult to master harmonies and rhythms. His lyrics, too, sound simple, but they excavate the deep roots of human behavior. In fact, Jamie’s light-hearted songs at the front of the show are the weakest. It’s the soulful ballads that land the most solidly, such as Kent’s stirring rendition of “If I Didn’t Believe In You,” Jamie’s reassurance to his wife that his enduring faith in her talent is one of the things that made him love her.

The material has a few shortcomings. It’s not clear until late in the show why the relationship erodes — primarily because Jamie’s success and Cathy’s inability to find success drive them apart. That doesn’t seem totally credible in this production no matter how often it happens in real life.

It’s really unfair to dwell on Dacal and we’re not dissing the superb local actresses in musical theater, but South Florida audiences don’t often get to see this level of talent and skill, two different things, even in road shows. For someone who started out just wanting to be a singer, Dacal has come a long way in the decade since she was the replacement for the lead in Actors Playhouse’s Four Guys Named Jose…and Una Mujer Named Maria. Participating in the development of two Broadway shows, In The Heights and her starring role in Frank Wildhorn’s Wonderland, have exposed her to especially creative and experienced musical theater hands who have helped hone her abilities. Not to mention, she exudes a winsome charisma that underlies a physical loveliness. She can be comical in the upbeat “I Can Do Better Than That” or tragic in the pain-soaked “Still Hurting.”

Kent shows why he has been one of the region’s leading men in local musicals for more than a decade. His affable demeanor and charm carry him through the lighter songs, but he brings a sadness at the recognition of his own frailty in the meaty penultimate song “Nobody Needs to Know” sung to his unseen mistress.

As usual, Arisco does a workmanlike job directing the piece and he sets the bittersweet tone that Brown wants while driving his actors to dig deep into the extremes of elation and desolation that the individual songs contain.

Sean McClelland’s set design and Patrick Tennant’s lighting will intrigue some observers and put off others. A series of turntables, sliding panels and steps cover the stage, painted in sky-blue with some fluffy clouds. The structure is backed by inexplicable flowers in vases and bouquets hanging upside down from a framework alongside swaths of white drapery. In the center, a footbridge spans a 10-foot hourglass made of clear vinyl with water trickling down it rather than sand.

Props are due musical director Manny Schvartzman for guiding the two singers and Schvartzman’s six-piece band who are nearly flawless in conquering Brown’s score.

At 42 years old, Brown is a charter member of the “new generation” of musical theater composers. He penned Parade (done at Broward Stage Door in 2003) and the song cycle Songs For A New World, which was a critical success for Actors Playhouse in 2005.

The Last Five Years opened in Chicago in 2001 and was successful enough to move off-Broadway the following year with emerging stars Norbert Leo Butz and Sherie Rene Scott for a two-month run. But its score recorded on Scott’s own record label, award nominations and its low production cost led to numerous regional productions and a cult following. Brown is slated to direct an off-Broadway revival at Second Stages next year and a film version keeps surfacing in media accounts as moving closer to fruition.

To read an interview with Janet Dacal, click here.