Caldwell Theatre’s Chad Deity Has All The Right Moves 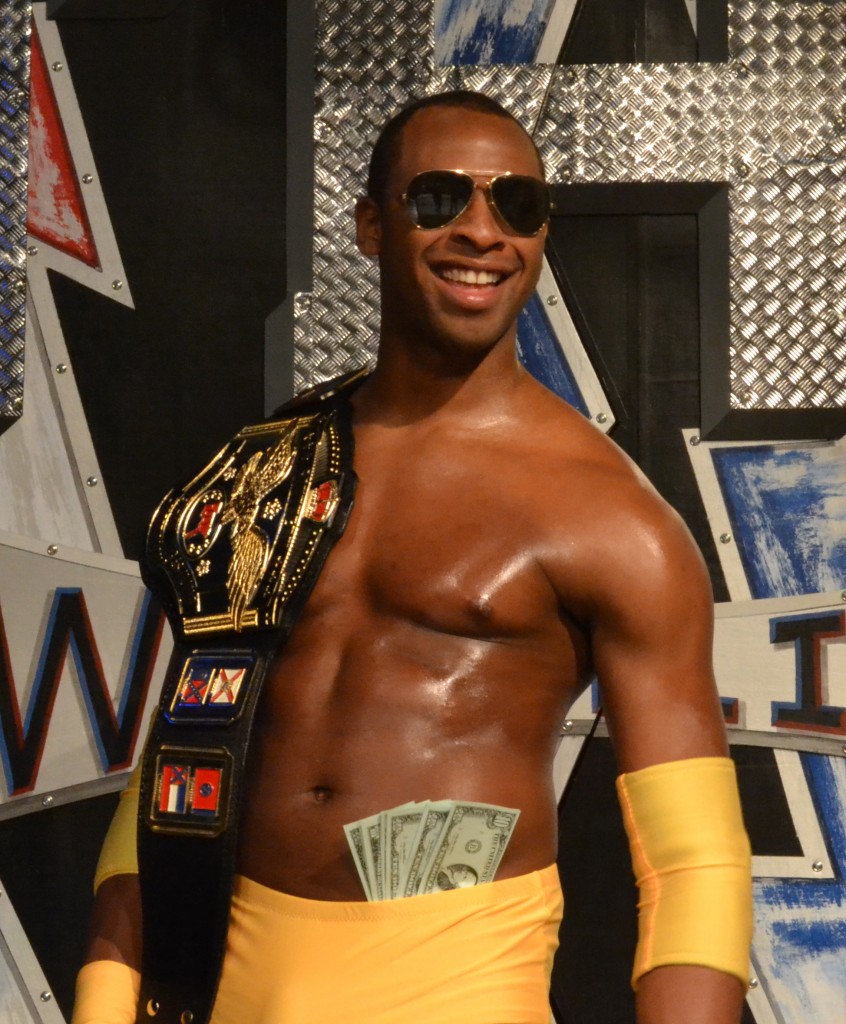 Hidden by the crisscrossing spotlights, the blaring fanfares, the handfuls of cash flying through the air, the billowing smoke (was there smoke? I’m not sure) and the sound of semi-buff bodies crashing to the mat of a wrestling ring, the Caldwell Theatre’s hilarious satire The Elaborate Entrance of Chad Deity sneaks a critical rabbit punch at the solar plexus of society.

The milieu of “professional” wrestling should not dissuade serious theatergoers, although the faux spectacle including brief grappling bouts will entertain anyone but a killjoy. The copious comedy is laced with cutting social commentary about demagogues exploiting our prejudices about race and nationality to make money or gain power.

Kristoffer Diaz’s play – a Pulitzer finalist in 2010 – is a risky choice for a theater whose audience prefers a title they have at least heard of, if never seen. But Artistic Director Clive Cholerton is betting heavily on word of mouth for this wacky but thought-provoking work in which performers tossing each other around is just the decorative icing on an incisive script featuring long philosophical monologues and rapid-fire repartee.

The play is a long story told by our genial narrator and behind-the-scenes guide Macedonio Guerra, a Puerto Rican from the Bronx who grew up loving the spectacle and especially the good-versus-evil stories of the silly make-believe world of commercial wrestling.

As an adult, Mace has forged himself into a highly skilled athlete in T.H.E. wrestling league – skills necessary to avoid getting hurt despite the complete sham of the actual wrestling. In long wry speeches to the audience, the pragmatic kid from streets displays an incisive intelligence and perceptiveness about the occupation and its shortcomings. For instance, he tells us, the secret of “professional” wrestling is that it’s the losing villain who has to be an expert. He executes moves dangerous to himself to make the “star” look good.

In these bouts, the “hero” is the titular Chad Deity, a charismatic, preening blowhard with a sculpted body, an America First mantra and an outsized gangsta persona – but who privately admits cheerfully that he is a lousy wrestler.

Frustrated at the inequity, Mace stumbles upon a possible path to the American Dream of fame and fortune. He teams up with Vigneshwar Paduar, a Brooklyn-born Indian-American streetwise athlete and ladies man just as flamboyant as Chad.

Egged on by the xenophobia of savvy promoter Everett K. Olson, they fashion a tag team of villains for Chad that racist Americans of many backgrounds can hate: a fundamentalist Muslim and an illegal alien from Mexico. From there, the surprises in the plot developments get too delightfully Byzantine to recount.

Cholerton has elicited joyful nose-thumbing performances from his cast.

Handsome Brandon Morris makes Mace a perpetually bemused observer who has absolved himself of any responsibility for advancing the racist storylines he disparages as self-evidently objectionable. What he is not conscious of is that he is complicit in them by his prudent silence and willing participation. Morris imbues his observations with a detached archness. The actor breezes through pages of monologues as if they were ideas naturally occurring to him that he thinks will amuse us. He deftly bounces like a tennis ball in a video game between droll conversations with the audience and frustrated dialogue with the promoter.

Donte Bonner, who oozes raw sex appeal, is appropriately over the top as the brash, seriously ego-centric Chad Deity. Bonner embodies a character who savors the rewards of a game he knows is rigged in his favor and who feels not the slightest bit guilty for taking advantage of the cupidity of passive bigotry.

Adam Bashian as Paduar is a revelation.  Frankly, he was so wooden in Broward Stage Door’s recent Guys and Dolls that I feared for this show. But in fact, he proves here to be a winning, engaging actor who captures Paduar’s charm and intelligence. And like everyone else in the cast, he’s downright funny.

The omnipresent Gregg Weiner makes the promoter Olson the embodiment of the crass and crude businessman who sold his scruples so long ago. Weiner’s Olson is so certain of his ability to predict the lowest common denominator taste of the public that he is blithely ignorant that his morality is reprehensible.

Special credit goes to fight arranger Pablo Marquez and to Matthew Schaller, an actual wrestler who spars with the actors through much of the show – ironically making the stars of this show look good.

Diaz’s script is not simply witty and perceptive. Although peppered with locker room language and offensive racial slurs, the dialogue and especially Mace’s speeches to the audience have that love of word play we just saw in Stephen Adly Gurgis’ The Motherf**ker With the Hat at GableStage. One of his inspired running bits is to have Mace tell the audience that there is no way such and such ploy will fly, only to find in the next cutaway scene that there is no bottom to what heresies that Olson and the wrestling audience will embrace.

The play seems to have undergone alterations since I read the original script used in Chicago and the one that was tweaked for the production I saw performed at Second Stage in New York. Diaz apparently has continued tinkering with the script for subsequent productions in Los Angeles and a run in Philadelphia where Bonner first played Chad Deity. Among other things, there are many topical references such as Mace suggesting the audience use their Iphones during intermission to Google the name of an ill-fated wrestler with a Middle Eastern nom de guerre.

Especially audacious (but successful) is when Morris breaks the fourth wall of the fourth wall. Mace is supposed to get the Caldwell audience to cheer and boo. But Morris occasionally encourages the audience to ad lib comments – a practice that any actor in a live Rocky Horror performance can tell you may get out of hand if you don’t keep control.

This show is as complex from a technical aspect as anything produced on a local stage in a long time. Thomas M. Shorrock’s kaleidoscopic lighting and sound design must have been a Herculean feat. Stage Manager Robert Herrle and his team must be taking Shorrock’s name in vain every evening for the hundreds of instant and split-second jump cuts in lighting and sound as Mace speaks to us and then to his colleagues. Certainly, there must have been a score of miscues that the audience didn’t catch, but it seemed like a flawless execution to us.

Since almost the first show in the Caldwell’s new home in 2007, Tim Bennett has employed projections and video in his set designs. But the work here by video designer Sean Lawson and Bennett eclipses anything before it: hundreds of titles, pre-recorded videos, live TV feeds, limited animation – many commenting wryly on the proceedings – and once again woven precisely with the dialogue by Herrle and company. Give credit as well to Cholerton whose background in film led to deft uses of the video.

Hopefully, Chad Deity is going to draw in a lot of people who might not otherwise be interested in “the-a-tuh,” but it should engage audiences also wanting to go home wondering if their own prejudices are being exploited.

For more WPBT uVU videos depicting some of the actual wrestling, click here:  1   2   3