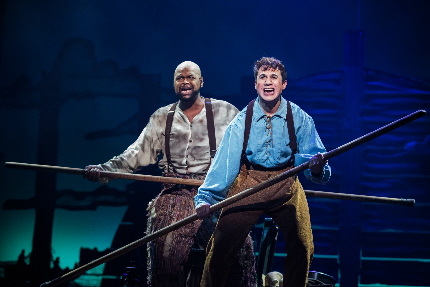 Lost in the enmity between red states and blue states and the erroneous stereotypes that each imagines of the other, we have forgotten the verities that we once unapologetically venerated as “American,” among them friendship, tolerance, personal freedom and a healthy sense of independence that danced on the precipice of nose-thumbing subversive non-conformity.

Those values are lovingly and joyously resurrected in Slow Burn Theatre Company’s Big River, a revival-like celebration of an America that likely never existed but speaks to what we wish we had been and represent what we once hoped we’d be.

Built on Mark Twain’s Huckleberry Finn with a courageously countrified score by Roger Miller, the 1985 show is much tougher than it looks to pull off. A company must embrace corn but not corniness, sentiment not sentimentality, and Twain’s odd brand of satire. They must confidently savor over-the-top storytelling tropes of a fable, accept the uncomfortable racism on display, and, above all, just barely sidestep the plastic recreation of 19th Century Midwest America oversimplified, romanticized and commercialized at Branson, Disney and Dollywood.

Happily, Slow Burn has hit all those notes. Director-choreographer Patrick Fitzwater, an enthusiastic cast headed by Ricky Cone as Huck and Brian Maurice Kinnard as Jim with a slew of Slow Burn vets, a fine house band, and a A-class creative team have produced a burlap-wrapped gem.

True ‘nuf, William Hauptman’s script runs a little long and meanders a bit on Huck’s journey downstream. And here’s heresy, Twain’s status as the greatest American humorist has always been debated in some quarters. Here, his humor translated on stage will amuse some audience members, but will run just a bit thin for others after a while.

Even when Twain and Hauptman flag at the last preview performance, the score soars as ordinary human beings let their souls shine through unsophisticated exteriors, such as Huck’s yearning in “Waitin’ For The Light To Shine” or Jim’s exultant “Free At Last”  or the exuberance and anxiety of adventure in “Muddy Water.”

If you graduated from high school, you know the plot, narrated here by the amiable Huck as he runs away from his alcoholic abusive father, joins runaway slave Jim and rafts down the Mississippi meeting various characters such as fourth-rate con men The Duke and The King. But the key in Huck’s evolution into a reluctant hero occurs when, agonized after viewing the ills of slavery close up, he agrees to go to Hell “as a dirty abolitionist” if he must in order to free Jim and, in the process, flouting every societal norm of the 1840s. His inherent humanity triumphs over the accepted principles of his society.

A great irony is Huck’s status as rebel as viewed in succeeding eras. As someone who gleefully defied ingrained establishment conventions he was cheered by liberal Boomers in 1985 as the Individual Against The Machine. Now, neo-cons would embrace him for the same reason, but in a different context.

The musical only glances off profound themes because the show, like Twain, works hard to avoid getting caught at “bein’ serious.” Since Huck is a not-self-aware storyteller, and only wants to entertain us, the musical’s style is raucously outsized most of the time. The writers stop the narrative dead to take advantage of an opportunity just to have fun such as when The Duke goes into a manic Shakespearean hodgepodge as a vaudeville for the yokels.

Cona sets the tone right off and then keeps us involved since he is on stage almost every moment. With a face sporting pouty lips and a warm grin like a very young Travolta, he exudes a good-natured mischievousness that is somehow innocent in its intent.

Kinnard, a New York actor who studied opera at New World School of the Arts, is a solid Jim and his rich chocolate baritone caresses those melodies and adds some gospel-inflected melisma.

The only carp is that both leads get a bit mush-mouthed wrangling the accents; the words can be difficult to understand, but we saw a preview and that will likely work itself out.

The supporting cast is laudable including Troy Stanley’s feral Pap, Matthew Korinko’s hapless The King, Victor Souffrant’s plummy The Duke, and Leah Sessa as an appealing Mary Jane Wilkins. A special shoutout to David Matthew Klein who played an ebullient trouble-loving Tom Sawyer in previews and to Cameron Jordon who subbed for him opening night. Adding significantly to heft of the music are the actors playing slaves: Elijah Word, Andre Russell, Shonda L. Thuman and Kendra Williams.

Show Burn veteran Emmanuel Schvartzman effortlessly changes musical genres once again, blending the voices and heading a band that sounds twice its number: Guillermo Gonzalez on guitars, Raisa Ilyutovich on the fiddle, Roy Fantel on drums, Jesus Mato in trumpet and Rupert Ziawinski on harmonica and Jew’s harp as well as his usually duties providing the bass baseline.

Sean McClelland’s set feature a weathered wooden semi-circle like a sunrise or sunset, leading to a widening ramp standing in for the Mississippi and bordered by wharves and clouds made of burlap. His raft not only rolls effortlessly, but actually gives a little when actors step on it. Rebecca Montero again creates many moods with her lighting, Rich Szczublewski’s sound is faultless and Rick Pena has clad everyone is classic period costuming. Like Schvartzman, all of them have the ability to recreate wildly different periods and environments and styles from Slow Burn show to show.

Fitzwater’s fluid direction seamlessly incorporates the boisterous dance numbers accented with enough prancing hoedowns and heel-kicking to constitute its own barn dance. His leadership is evident in finding, establishing and maintaining a coherent consistent tone throughout.

Big River presented by Slow Burn Theatre Company through April 2 at the Amaturo Theater, Broward Center For The Performing Arts, 201 SW 5th Ave., Fort Lauderdale. Performances are Thursday through Saturday at 7:30 p.m., and Sunday at 2 p.m. Running time about 2 hours 45 minutes including one intermission. Tickets are $47-$60. Call (954) 462-0222 for tickets, at www.browardcenter.org or #Ticketmaster.com; in person at Ticketmaster outlets or the Broward Center’s Auto Nation Box Office. Info at www.slowburntheatre.org 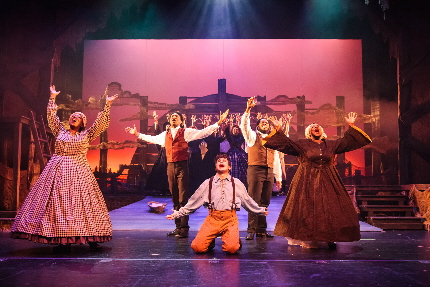