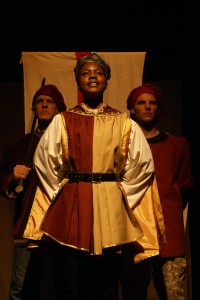 In the end, director Ronald Mangravite was right.

Sipiwe Moyo is a skilled enough actress that being an African American woman became nearly irrelevant to her playing the title role in New Theatre’s production of Henry V.

As the only black actor in the cast, her dark skin and braids pulled into a pony tail work in her favor to set her apart with an aura of “otherness” as befits someone with royal blood.

In fact, the surprise of the production that opened Saturday was that Moyo and most of this cast demonstrated more clarity and dexterity delivering Shakespearean speech than virtually any local troupe has in many years . Despite a long list of carps and criticisms, this is a mildly imaginative production that has elements worth seeing, especially since we get so little adequate Shakespeare in South Florida.

No, the crippling shortfall with Moyo’s Henry, and by no coincidence the entire production, was that she and the proceedings lacked the rousing charismatic magic essential to drive this narrative.
For instance, the St. Crispin Day’s speech, the most stirring win-one-for-the-Gipper oration of all time, was passably performed but wouldn’t have roused a bloodthirsty pirate to sack a gold-encrusted city.

Tall, affable, exuding grace and gravity, Moyo is obviously a talented actress and we yearn to see her in a role better suited to her range. You see that in her more convincing “a little touch of Harry in the night” scenes such as Henry’s Garden of Gethsemane struggle with doubt.
But she, and, again the entire production, only deliver the obvious intent of the speeches and the situations that are right in front of her, straightforward, honest but without much shading. Mangravite gets no subtext out of her or the production. There is no emotional or psychological arc. No character learns anything; no one changes. This Henry V is just a story, an interesting one, but with no more depth than a fairy tale without even the hint of a moral.

Some of the fault is (oh, heresy) the script itself; Shakespeare was writing a popular historical pageant. But Laurence Olivier used Henry V as an example from a storied past to bolster English nationalism during World War II. Kenneth Branagh’s brilliant film version depicts the horror of war forging the maturation of a young man into a king.

For those who have forgotten, the plot finds former party boy Prince Hal suddenly thrust onto the throne where he taps into previously unsuspected qualities. Church leaders press him to reclaim disputed lands on the mainland that the French currently occupy. He leads a surprisingly successful campaign through northwest France until the eve of a major battle at Agincourt with his troops worn-out and outnumbered 5 to 1. Spoiler alert for those who don’t know their history: Henry’s “band of brothers” wins a stunning victory. The peace treaty includes marriage to a French princess who Henry clumsily woos.

Despite its faults, the New Theatre production benefits from inventive staging. Mangravite, like Shakespeare in his prologue, calls upon our imagination to finesse theater’s limitations in depicting an epic’s scope. Nine actors play all the roles. K. Blair Brown’s mishmash costumes and Mangravite’s set intentionally look like flotsam cobbled together from the bottom of an actor’s trunk. But with Kris Cardenas’ lighting , Ozzie Quintana’s sound effects and the audience’s cooperation, the conceit works just as it did in Shakespeare’s “wooden O.”

Mangravite has drawn out crisp and energetic performances from much of the cast. Especially effective is the chameleon Scott Douglas Wilson (fresh off Katurian in Infinite Abyss’ The Pillowman) who plays a grave King of France, a fey nobleman, an earthy soldier and the hardest part in the play, the pedantic Archbishop of Canterbury who must dump a tome of exposition in the opening scene without losing the audience.

Close behind him is Christina Groom as the arrogant Dauphin of France who has the energy that Henry needed here. She is also terribly funny as the French princess Katherine who speaking almost exclusively French, struggles to learn English from her lady-in-waiting, the equally comic Tara Vodihn.

Vodihn does go way over the scenery-chewing top in portraying the rascally foot soldier Pistol, probably overcompensating for the fact that it’s nigh onto impossible to buy a woman playing Long John Silver.

The rest of the cast includes Robert Alter, Charles Sothers, Jordy Diaz and Merry Jo Cortada, a veteran with some skill at verse speaking.

You can quibble about the clashing mash-up of styles. The soldiers are dressed in Elizabethan doublets draped over Desert Storm uniforms. The United Nations’ worth of accents range from clipped upper-crust British English to, no kidding, George Peppard’s cigar-chomping Hannibal from The A-Team.

And there are some directorial misfires: The non-Henry scenes among the troops in the trenches play a little mushy. The cast singing some madrigal off-key for the finale is anti-climatic.

But a final kudo is due Mangravite as The Actor who plays Exeter and Chorus. From the moment he starts the play with “O, for a muse of fire…” clad in blue jeans and a black T-shirt with the auditorium still lit, you are hearing someone whose caress of the verse deftly wrings out the meaning of every syllable as opposed to every line. No one has performed Shakespeare as well since David Mann’s Hamlet for New Theatre in 2002. Frankly, his clarity, bite and verve underscore how few local actors have the skill set to needed to nail the music and meaning in Shakespeare’s language. It’s one of the reasons to go see this production.