Disgraced Makes You Reexamine What You Think, Who You Are 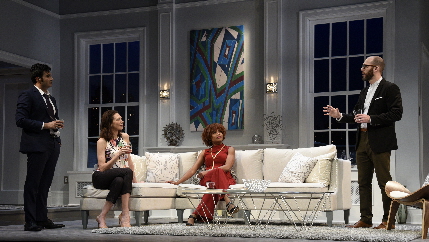 Among the greatest feats that art can accomplish is to make you uncomfortable by injecting ideas that force you to re-examine what you think. Your beliefs may survive intact, but they have been tested and earned confidence in their validity. Or, even better, you revise the preconceptions you base your life upon.

This increasingly more timely script has become one of the most produced plays in the country in part because it forces audiences to look beneath the easily accepted tropes of our society and analyze precisely who we are, what makes us who we are, and how we deal with that.

This fine edition helmed by J. Barry Lewis succeeds so well that a third of the sold out opening night audience stayed at a sponsored talkback to air varied reactions to those questions.

The 2013 Pulitzer-winning script by Ayah Akhtar is so thematically rich with so many premises offered, deconstructed and turned on their head that you can glean something new from the warring philosophies, even if you have seen it before as this critic has twice previously.

It’s among a spate of recent plays about – and, more importantly, written by Arab-Americans – about Arab-Americans’ attempts to find their place in a Western society, played against the lingering if politely repressed fury, fear and prejudice of mainstream Americans against Muslims. It asks our nation of immigrants whether anyone can choose or be allowed to or even should want to assimilate, an issue that must resonate with Cubans, Jews, Italians, Irish and any other group that strives to “fit in” or not.

Disgraced puts four latter-day liberal yuppies from different backgrounds in the crucible of a dinner party among spouses and business associates. During an evening of gourmet salad and sophisticated banter, invisible fault lines between cultures crack wide open, leaving devastation in every direction. It is a scalding rebuke to anyone who thinks that any section of our society has come to an intellectual or emotional homeostasis about social, cultural and geopolitical divisions.

The confrontation occurs in a sun-kissed apartment on the Upper East Side owned by a loving middle-aged couple out of Vanity Fair: Amir Kapoor (Fajer Kaisi), a smoothly handsome mergers and acquisition lawyer American-born of Pakistani parents and Muslim-raised; and his wife, Emily (Vanessa Morosco), a gorgeous open-hearted WASP artist whose work is rooted in her interest in Islamic culture.

Amir believes he is on the cusp of becoming a partner and Emily is about to have a breakthrough due to Isaac (Joel Reuben Ganz), a Jewish museum curator who wants to exhibit her work at the Whitney. Isaac is married to Jory (Chantal Jean-Pierre), an African-American lawyer who is also an up-and-comer in Amir’s Jewish-dominated firm. All four are to meet at the elegant upscale Kapoor condo for dinner.

But a problem emerges. Amir’s nephew, Abe Jensen (born Hussein Malik in Pakistan) (played by Eddie Morales) is upset that a local imam has been arrested on what he believes are bogus charges of financing terrorists. Abe contends that it is solely religious persecution. Neither man is especially devout although both were raised in the faith and then let it slide into inconsequentiality. Abe wants Amir to intercede as a lawyer. Amir, who has spent his life pointedly repudiating his heritage and religion, balks until Emily pressures him to help.

Quickly, a phrase here or there twists another screw another turn and triggers eruptions of buried prejudices. For instance, Isaac off-handedly complains what a nightmare it is trying to get through airports these days. A grimly bemused Amir in the early stages of a liquor buzz nods and repeats the line with a touch of resentful irony. What begins as an intellectual dorm room debate billows into an antagonistic clash. It culminates in shocking twists as the quartet goes places that they cannot come back from; things are said and done that cannot be undone.

All of the characters begin espousing and pursuing one point of view, but end up in a much different place – sometimes simply revealing their true feelings and sometimes because of revelations that are a surprise to them as well. For instance, Isaac is a classic urban liberal full of even-handed admiration for Amir; Emily embraces the positive elements of Arabic culture, including the Muslim religion, as an inspiration for her. And Amir believes that he has consciously rejected all the traditional aspects of his culture – he feels not just a lack of kinship, but espouses being repulsed by much of it. None of that will stand when the fragile civility of social interaction erodes.

Perhaps the second-most shocking but crucial element of the play is when the two Arab-American characters admit in different parts of the play that America brought 9/11 upon itself by its arrogant insistence that the Muslim world with its roots in antiquity instead adopt the “enlightened” Western culture. What’s shocking is not the statement, but that Ahktar, who clearly does not agree with it, lays out an unnervingly cogent and nearly persuasive case to support it. In a time when young people on both sides of the world are joining ISIS, these arguments force the audience to at least pause and reassess – not terrorism – but our complicity in the world we live in 2015.

The terrible irony here is that Amir sees himself as American, with no ethnic hyphen. Inescapably Semitic-looking, he has molded himself in the image of a GQ sophisticated Wall Street type. It echoes the Jews’ outlook in Germany during the Weimar Republic when they doubted anything would happen to them because, after all, they were Germans. He thinks his wife is romanticizing the Arabic culture and selectively ignoring the less pleasant aspects of Muslim theology and practice.

And that’s what is so striking about Maltz production: Despite their ethnicities, the four people at the dinner party initially seem cut from precisely the same piece of social cloth, or at least have wrapped themselves in the same cloth. They laugh at the same things, they have the same demeanor, the same taste in clothes, the same confidence in their imminent primacy as the heirs to the new world. Then we watch the hairline fractures appear as social, political and cultural pressures bear down on the seeming monolith. Over about a half-hour, the cracks widen into fissures and then become an abyss.

Lewis is one of the best directors in the region both in physical staging and in helping the cast excavate meaning and then guiding them in communicate these themes through an unified whole.

The entire cast is unassailable.  Kaisi, who did the part once before, perfectly embodies the ultimate example of assimilation, a man frustrated at the eroding failure of his pointed jettisoning of his heritage and his full-throated embrace of Western culture. He charts the arc as the increasingly intoxicated Amir lets long-simmering passions break through.

Morosco is believable in her pure-of-heart intellectualized embrace of Islamic culture. Ganz inhabits the classic urbanite whose liberal beliefs paper over deeper problems. Jean-Pierre is a vibrant charming colleague although her performance fails to even hint that she is carrying a devastating secret. Morales, a 2015 New World grad, depicts an earnest young man initially trying to fit in American life but who eventually comes to believe that assimilation is a betrayal of who people really are.

The creative team is, as always, providing some of the best work in Florida, but special recognition is due Paul Black’s lighting, which changes with the time of day, but also communicates changes in mood and tone. The most notable is when Amir comes home with bad news to an empty apartment. The room in the dying half-light of dusk. Kapoor initially switches on a table lamp as the sole illumination. Then he goes to a large recessed bar, slides open its door and floods part of the set with light.

Ahktar’s goal is not to bring the audience around to one side or another on questions of what forges a person identity or whether we are really as accepting of “others” as we think. It’s to send everyone home incapable of not asking those questions and insisting that we answer them for ourselves. The Maltz succeeds in that.

(Note: Every performance will be followed by a “Continue The Conversation” group discussion for about 20 minutes.)

Disgraced runs February 12–26 at the Maltz Jupiter Theatre, 1001 E. Indiantown Road in Jupiter. Performances at 7:30 p.m. Tuesday-Friday, 8 p.m. Saturday, 2 p.m. Wednesday, Saturday and Sunday. Running time 90 minutes with no intermission. ickets are $56-$93, available by calling (561) 575-2223 or visit jupitertheatre.org. The theater plans a talkback after every performance.

To read a feature on this production, click here

One Response to Disgraced Makes You Reexamine What You Think, Who You Are