Posted on February 3, 2013 by Bill Hirschman 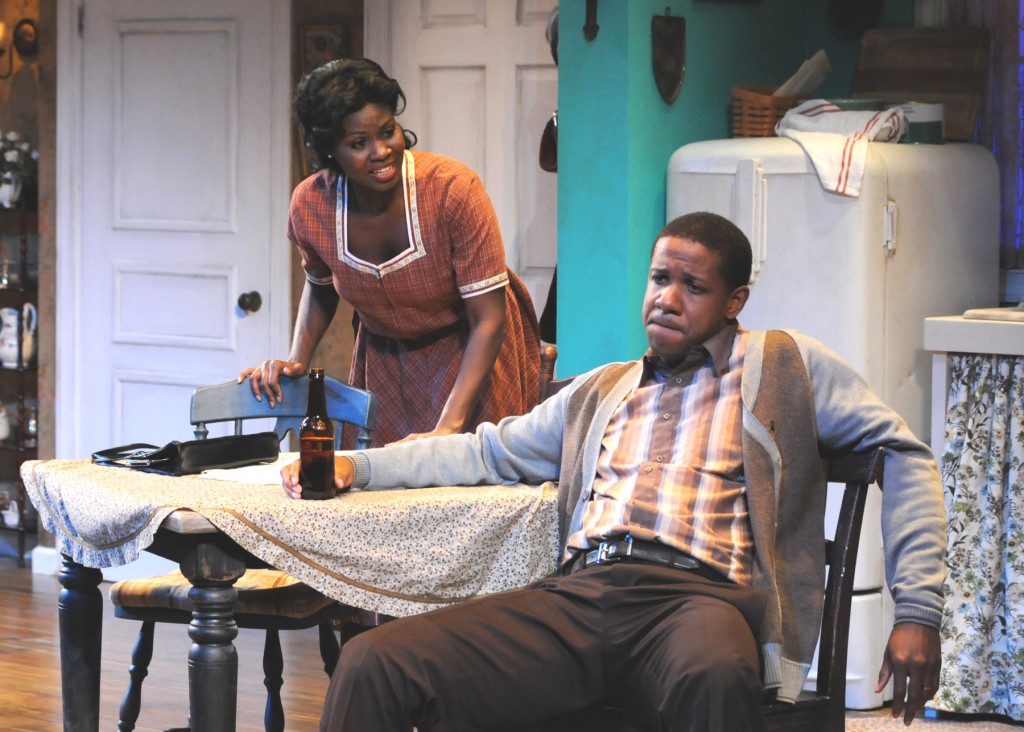 Shirine Babb as Ruth tries to reach her morose husband Walter Lee played by Ethan Henry in Palm Beach Dramaworks’ A Raisin in the Sun. Photo by Alicia Donelan

It starts slow, so slow that you fear it may never get going. Not boring, just eavesdropping on a domestic slice of life that isn’t inherently dramatic. In fact, it’s 45 minutes before the family banter and kitchen sink naturalism of Palm Beach Dramaworks’ A Raisin in the Sun finally gets the electrical jolt that a 21st Century audience is jonesing for.

But when they do come, the emotional wallops arrive in every deepening wave of gut-wrenching, heart-rending passion, arguably all the more potent for having emerged from such a quiet, prosaic run up.

Such is the power of that particularly human pursuit – dreaming of a better life, heroically persisting despite logic and despair, sometimes fueled by nothing but sheer faith and abiding familial love. In the vision of director Seret Scott, Langston Hughes’ titular dreams deferred have rarely been so clearly the driving force behind every character in Lorraine Hansberry’s oft-revived play.

But Hansberry was also exploring the dark side of pursing dreams to the fatal exclusion of family, dignity and pride.  While this play is inescapably rooted in the black experience, its staying power after more than a half-century comes from the universality of such yearnings and the tragedy of seeking self-worth in the chimerical American Dream. Walter Lee Younger and Willy Loman make the same mistake; Walter learns it in time while Willy never does.

Equally remarkable is that while this Raisin has superb performances by Pat Bowie as the matriarch Lena and Ethan Henry as Walter, Seret Scott has kept these protagonists life-sized, not self-conscious icons. The result is that this production is as much an ensemble piece about a family as we’ve ever seen it. The sole downside is that the audience has to have faith in the play throughout that first long section because there’s no Claudia McNeil or Sidney Poitier hypnotizing you.

They rarely seem like actors delivering spotlighted moments from a script, even when the characters are scraping emotions out of their souls. We’re just peering through the fourth wall of their apartment into scenes of real life. And yet, almost contradictorily, Scott and her actors have somehow captured the near poetry of Hansberry’s stirring speeches plausibly emanating from the mouths of everyday people. The melding of the two implies that mankind is divinely imbued with an innate nobility that so transcends race and class that it is almost condescending to mention.

A Raisin In The Sun was the first play by a black female playwright to reach Broadway and the first with a black director, Lloyd Richards. It had an incredible cast including McNeil, Poitier, Ruby Dee, Louis Gossett, Diana Sands, Ivan Dixon (later a director and one of Hogan’s Heroes), then child actor and now elder statesman Glynn Turman, and, in minor roles, men who would become the foundation of African American theater, Douglas Turner Ward, Ed Hall and Lonne Elder III. Although nominated, Raisin never won a major mainstream award in its first outing.  But it brought black audiences to the theater in numbers rarely seen before and made deep connections with audiences regardless of the ethnicity.

It portrays three generations of the financially-struggling Younger family living in a down-at-the-heels apartment in Chicago in the mid-1950s. Widowed Lena leads with a strong but loving hand and dreams of a stable future for her family — and maybe a garden to tend. Walter Lee is a 35-year-old chauffeur who thinks he can finally earn his adulthood with his dream of owning a liquor store.

His wife, Ruth (Shirine Babb), keeps the household running while cleaning other people’s homes and dreams of removing the wedge that Walter’s disappointment in himself has driven into their marriage. Travis (Mekeil Benjamin alternating with Johusa Valbrun) is their 12-year-old son who must sleep on the couch because the quarters are so cramped. Beneatha (Joneice Abbott Pratt),Walter’s younger sister, dreams of finishing her studies to be a doctor and is far more contemporary than anyone in the family, interested in philosophy and her African heritage.

Beneatha is being wooed by a thoroughly assimilated wealthy student George (a wonderfully arrogant and constipated Jordan Tisdale) and Joseph Asagai (Marckenson Charles), a compassionate intellectual dedicated to returning home to reform his nation.

The family patriarch died prematurely after working himself to death. As the play opens, everyone is awaiting a $10,000 life insurance check that has slammed the family’s dreaming into high gear. But the conflicting nature of those dreams aggravates tensions and discord. Initially, it is Lena’s dream of owning their own home that supersedes the others, until their prospective neighbors in the all-white suburban housing addition of Clybourne Park (that should ring a bell with aCaldwell Theatre audiences) offer to buy the house from them.

Raisin captures a watershed moment in the sociological evolution of African Americans, before the back-to-Africa movement became popular, before black pride and black power became visible political forces. Just at the adolescence of the civil rights era, the goal of mere survival was being replaced with security and perhaps even the glimmer of equality – with the attendant frustrations of the young at the creeping pace of change. There’s an exchange between the older generation and the new one:

WALTER:  Sometimes it’s like I can see the future stretched out in front of me – just as plain as day. The future, Mama. Hanging over there at the edge of my days. Just waiting for me – a big, looming blank space – full of nothing.

MAMA: Son, how come you talk so much ‘bout money?

WALTER: Because it is life, Mama!

MAMA: Oh, so now it’s life. Money is life. Once upon a time freedom used to be life…. You something new, boy. In my time, we was worried about not being lynched. And getting to the North if we could and how to stay alive and still have a pinch of dignity too.

Scott deserves a good deal of credit for what we see, but she has also assembled a fine cast of local and out of town actors. Start with Ethan Henry who the last 12 months or so has gifted us with the corrupt drug counselor on The Motherf**ker With The Hat, the smooth attorney in Race, and the best performance last year that no one saw, the title character in M Ensemble’s King Hedley II. which won him a Carbonell nomination last month. Henry fulfills that promise with a multi-dimensional portrait of a decent but seriously flawed individual still searching for the fulfillment and even the definition of his manhood.

In a deep dark coffee of a voice, Henry delivers a rainbow of emotional colors ranging from fury to despair to love to respect, but above all, a physicalized yearning so palpable and pain-filled that Henry makes you nearly able to forgive Walter’s outright emotional cruelty to his wife. It crystallizes when Henry, doubled over on the floor in agony over his loss of the family money, rips out of his insides, “That money is made out of my father’s flesh!”

Audiences may remember Pat Bowie’s standout performance as the pragmatic mother in the Caldwell Theatre’s production of Doubt soon after it moved to its new building five years ago. The way Bowie just inhabits Lena is notable for the very fact that you rarely catch her acting. She isn’t trying to create some force-of-nature Earth Mother, just a devout, hard-working, no nonsense woman trying to keep her fractious family whole against the ravages of the outside world.

Bowie’s Lena not only exudes decency, but also discipline. When Beneatha repeatedly denounces the existence of God, Lena slaps her and commands, “Now, you say after me, ‘In my mother’s house there is still God’!” Try to stay unmoved when she drags out of her diaphragm the monologue about how her husband died trying to provide a future for his family and how Walter has lost the fruits of that effort. Then Bowie stands stage center arms out like she is being crucified and yells to God for strength.

Babb has the thankless role of Ruth who wonders if she can bring another child into this world and her damaged marriage. Babb makes you see that Ruth sees the child as much as a cause for fear as joy. The actress convincingly charts the spectrum from Ruth’s beaten down moments to her exultation at the prospect of escaping the rattrap of an apartment and all it represents.

Pratt does a solid job throughout, but something special happens when she sits stunned at the top of Act 3 after the money has vanished. Pratt has given Beneatha a gently paternalistic sarcasm through much of the evening to communicate her growing distance from her mother’s way of doing things. But in this scene, Pratt’s dreamer is nakedly consumed with despair and a terrible lack of faith in humanity.

Fortunately, to give her and the audience some hope, Hansberry and Scott have Marckenson Charles as Agasai to deliver Hansberry’s signature belief in the future. Charles has made a reputation with such roles as the aspiring writer in Superior Donuts at GableStage.  Here, Charles takes the supporting role of Agasai and invests it with a heartfelt sincerity and earnestness that is moving. It is Charles who persuades Beneatha and all of us to trust in humanity’s potential to make a better world. Hansberry, whose life certainly tested her beliefs, was a deep believer in the possibility of positive change and better future, as reiterated in the final scene of her last play, The Sign In Sidney Brustein’s Window.

A nod is due David A. Hyland as Karl Lindner, the impossibly white bread representative of the Clybourne Park homeowner’s association. Precisely as Hansberry must have wanted, Hyland’s depiction of banal prejudice is all the more insidious because certainly Lindner would recoil at the thought that he was being racist.

This Raisin might benefit if the first half-hour was a little more vibrant instead of just exuding a warm glow. But once the Youngers start digging into the viscera of their dreams, this becomes yet another example of stirring South Florida theater.

A side note in the expectations department: A Raisin in the Sun, like the recent A Delicate Balance and last season’s All My Sons, is a three-act play, in this case staged with one intermission. Like those plays and most from that era, Raisin is written with a more deliberate pace; Dramaworks directors like Scott, J. Barry Lewis and William Hayes respect that. Audiences coming to these shows need to cast away their 21st Century expectations of a blazing opening and a hell-bent careening ride through 90 minutes and back out to the watering hole next door.