Posted on February 8, 2020 by Bill Hirschman 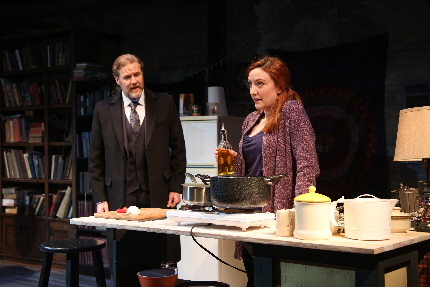 The grimy, nearly wall-sized skylight does more than let in some much-needed light into the cramped, cluttered attic apartment that teacher Kyra Hollis (Sarah Street) has chosen to call home. That skylight allows Kyra to see the poverty-stricken London neighborhood below, yet also be removed from it; to see the people who live there but not be forced to interact with them once she has closed her apartment door.

But once her former lover and one-time boss Tom Sergeant (Peter Simon Hilton) shows up to check on Kyra, and perhaps rekindle their relationship, that skylight illuminates the vast differences in their politics, their lifestyles and the reason their affair ended so abruptly. The skylight also becomes adds the element of cocooning the couple from the rest of the world.

At first, Tom and Kyra seem to be talking just about their six-year affair that ended quickly three years before when his wife found out about the relationship. Alice died a year ago and the widower seems to believe it is time to revisit what went on during the lovers’ years together. From the beginning, Tom and Kyra seemed unevenly matched. He is a 50ish wealthy restauranteur while Kyra, 20 years his junior, was his son’s live-in tutor. He introduced her, he believes, to fine dining, the joys of being part of a family and a comfortable lifestyle — all of which she seems to have given up to live in this small apartment with a small hotplate.

Their argument begins right away as he criticizes the way she is making spaghetti — which Kyra actually does as the theater fills with the redolent fragrances of garlic. But mainly he resents that Kyra left him just before Alice was diagnosed with cancer — forcing him to deal with his wife’s illness, her slow death and Alice’s anger over the betrayal of her husband and Kyra, whom she once considered a friend.

Tom’s answer was travel to escape his wife’s pain and to build her a bright, clean skylight so she could see the garden she once lovely tended—a skylight that is the antitheses of the one in Kyra’s apartment.

But as their arguments deepen, the chasm between them become even more pronounced as they discuss politics, social differences, poverty and other issues. Kyra espouses more liberal philosophies and Tom more conservative ones, but their backgrounds turn these views around. Although Kyra appears to have had a rotten childhood, she is from a privileged family though her horrid father apparently left the bulk of his estate to an animal rescue group. Tom was raised by a more modest family, but being a self-made man has robbed him of compassion, leaving him only disdain for those who toil in poverty.

Their arguments are not just about what may separate two people but also illustrate the deep divide of politics. While Hare’s 1995 drama is set in London and touches on anti-Thatcher views, the theories espoused by Tom and Kyra also translate easily to what is happening in the U.S.

Exquisitely directed by Vanessa Morosco, Skylight moves briskly as the controlling Tom finds himself well matched by Kyra who is anything but acquiescent. Street and Hilton both inhabit their characters so superbly that we feel as if we truly witness a relationship fraught with problems. Hilton’s bombastic persona is undone when he realizes that he can no longer control Kyra. Likewise, Street may, at first, seem quiet but she shows Kyra’s mettle in many ways. Street also doesn’t make Kyra a saint for giving up a comfortable life, but exposes that this penance is a bit self-serving. She’s enjoying the suffering.

Morosco and Hilton are married. Morosco is a veteran actress and director who wowed audiences last season as Bunny in Dramaworks’ The House of Blue Leaves, while Hilton scored the year before as Dysart, the agonized psychiatrist in Dramaworks’ Equus. This is the only the second time she has directed him; the first was production of Henry V1 Part 1. But this is the 15th time they have worked together including Dramaworks’ Arcadia in 2017.

Harrison Bryan’s two brief scenes as Edward Sergeant, Tom’s son, perfectly illustrate how this young man was —and is — affected by his mother’s death and the loss of Kyra who truly was part of his family.

Skylight premiered in 1995 in London starring Michael Gambon and Lia Williams, then moved to Broadway in 1996 winning widespread acclaim. The work was revived in London in 1997 with Bill Nighy. With a new director, Nighy and Carey Mulligan revived it again in London in 2014 and moved it to New York in 2015.

Skylight runs through March 1 at Palm Beach Dramaworks, 201 Clematis St., West Palm Beach. Running time is two hours, 15 minutes with a 15-minute intermission. Show times are 7:30 p.m. Wednesday, Thursday and some Sundays; 8 p.m. Friday and Saturday; and 2 p.m. Wednesday, Saturday, Sunday. Individual tickets are $77. Student tickets are available for $15, and Pay Your Age tickets are available for those 18-40. Tickets for educators are half price with proper ID (other restrictions apply). Call (561) 514-4042, or visit palmbeachdramaworks.org.

To read a feature story on the production, click here.