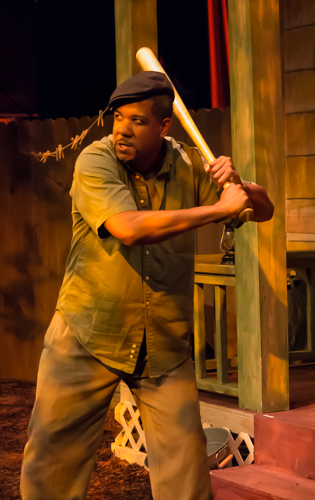 Rage and defiance – against racism, against betrayal, against cruelty, fate and death itself – washes out into the audience with a ferocity rarely seen in Florida theater in The M Ensemble Company’s powerful production of August Wilson’s masterpiece Fences.

Ethan Henry, as the Lear-like flawed Troy Maxson who has destroyed everything he has built and everyone he has cherished, stands center stage in a baseball batter’s stance and dares his venerable enemy Death to come for another match.

Makeba Pace, as his granite-loyal wife Rose, paces the stage, her previously unshakeable support having been betrayed. She unleashes the pain accumulated yet deferred over the hundreds of disappointments and sacrifices she has made during their marriage.

These are only two of a dozen masterful arias – and it often does feel like fierce music — that fill us with awe and admiration for the human spirit. This production under John Pryor’s direction marks some of the best work that M Ensemble has delivered in at least a decade and possibly longer. 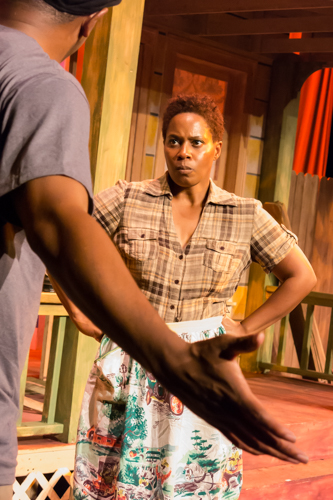 But there is a second tragedy on the M Ensemble stage: The production marks the final appearance of the married Henry and Pace before they head for Los Angeles at the end of the month. Together and individually, they have gifted local audiences with some of the most exciting acting of the past 4 ½ years. More on this later, but get tickets to see what arguably is their best work yet.

Fences is the sixth play chronologically in Wilson’s series of ten works depicting succeeding decades in the lives of African-Americans. All but one are set in Pittsburgh’s low-rent Hill District.

This one focuses on Maxson, a 53-year-old garbageman whose dreams of being a professional baseball player in the white major leagues were crushed by racism initially and later by his age after black players were admitted. With ebullient humor for his friends, a passionate love for his wife and a cruelly stern hand for his two sons, he is a force of nature ruling his world from the back porch of his decaying home in the 1950s.

Troy’s life has been repeatedly blighted by racism and death, forging steely pragmatic philosophies: Existence is a punishing unforgiving marathon to be triumphed over by sheer force of will. Further, outside of family, nobody gives you anything out of humanity or charity; you must earn it and take it. Toxic bitterness eventually infects his soul, causing him to maim those closest to him as well as his own life.

But like Lear, Troy is both heroic and flawed. His sexually-charged love for Rose is deep. His friendship is abiding with Bono (Chat Atkins), forged in prison after a robbery turned fatal in their youth. His bluster evaporates and he is near tears when faced with his brother, Gabe, whose mind and body were shattered during combat in the Pacific. Gabe now roams the neighborhood convinced that he died, conferred with St. Peter and now is waiting for the word from heaven that he is to blow his ever-present trumpet (sans mouthpiece).

The most problematic relations are with his 34-year-old son Lyons, a ne’er-do-well jazz musician wannabe (Jovon Jacobs) and especially his high school age son Cory (Roderick Randle) who is being sought by football recruiters. Troy is especially tough on Cory who accuses Troy of not wanting him to surpass his father, although privately Troy says he is being tough because he does not want the boy to become anything like his father.

The ensuing journey is shot through with humor, especially when Troy tells his fanciful stories. But Troy’s anger and resentment over lost opportunities eat away at his soul despite the iron exterior. An inveterate storyteller of memories that meld fact and fiction, Troy may recall personally backing down an anthropomorphic Death, but he has sowed the seeds of destruction for himself.

Wilson’s skill at prosaic syntax, extended metaphor and poetic prose all synthesize into a verbal music that still feels like you are eavesdropping on back porch conversations. The cast unreels this so smoothly that it sounds perfectly natural, as if it was their souls speaking rather than their mouths. No one does it as well as Henry who fires out Wilson’s words like a machine gun, infusing them with passion, perfectly riding Wilson’s rhythms despite that velocity.

Pryor, one of the region’s longest practicing directors, has cut back on his workload in recent years. M Ensemble has done all of Wilson’s plays and Pryor has helmed many of them, most recently Henry’s turn in King Hedley II in 2012. But this may be some of the best work he’s done, bringing out most of Wilson’s themes and eliciting some of the best performances that his supporting cast members have given. He might have forced Henry to differentiate some of his tirades a bit more, but Pryor’s steady hand is evident throughout.

Henry is – we keep using this word – “volcanic” with vitriol, humor and pain spewing like an open fire hydrant. Troy is a complex creature and Henry skillfully displays many of his warring facets. As excellent as this performance is, it makes you hunger to see what he will do with it in about ten years when he’s closer to Troy’s actual age.

Pace exudes a selfless warmth that proves she is the emotional center of the family holding everything together. But the real challenge that Pace conquers is keeping Rose from seeming a subservient dishrag in the first two-third of the play. Her Rose has a quiet solid fire of her own and a vibrancy that makes it clear why Troy and everyone else revere her.

Randle has the toughest part in Cory even though he has played it before. But he succeeds in making the audience vicariously ache for Troy’s approval. He convincingly portrays a teenager beginning to rebel inside a strict environment that would make boot camp seem like summer camp.

Atkins makes Bono the epitome of a jovial running buddy who eventually settles down and Jacobs brings a wistfulness to Lyons who cannot even now obtain validation from his father. 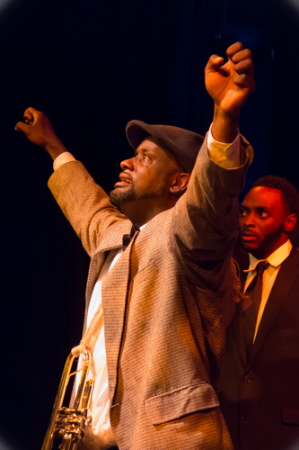 Keith C. Wade as Gabe delivers some of his best work with Pryor’s guidance. Wade and Pryor wisely do not overplay Gabe’s gentle insanity, but give him grasping hand gestures to quietly underscore it. In the final scene of the play, Wade and Pryor have Gabe’s face light up with wonder and joy as he “sees” the gates of heaven open in a reaffirmation of redemption and forgiveness.

Sumaiyah Wade made a charming little girl in the final scenes although she needs to speak up.

So back to our farewell to Pace and Henry. Henry has been setting local theater on fire since 2012 with indelible performances as Walter in Palm Beach Dramaworks’ A Raisin in the Sun, Primal Forces’ conscienceless hustler in Sunset Baby and the towering King Hedley II for Pryor at M Ensemble. Any and all of these deserved a Carbonell statue. Handsome and charismatic, he has developed his natural gifts into a deft skill set. Although anger, pain and frustration are hallmarks of his performances, he convincingly portrayed a success-hungry refugee from a southern farm in M Ensemble’s The Piano Lesson and the high-powered denizen of a law firm in GableStage’s Race.

In every role, Pace is every inch his equal as was seen as the wife in King Hedley II. She often plays a put-upon partner, but among Pace’s skill is making these women’s abused loyalty completely plausible even admirable to a post-feminist audience who’d prefer she just leave the offending spouse. But she may have an even greater range than Henry: witness her tough-minded investigator/lawyer from Child Protective Services in Zoetic Stage’s Stripped last season or her finest work, the pragmatic survivor in Sunset Baby.

Suffice it to say that these are irreplaceable talents and we hope local artistic directors find a way to bring them back from time to time.

History lesson: Fences bowed at the Eugene O’Neill Theater Center in 1983 as a staged reading, then to Yale Repertory and went to Broadway in 1987 where the reworked script won the Pulitzer Prize and a Tony Award in a legendary production starring James Earl Jones and Mary Alice. It was revived in 2010 with Denzel Washington and Viola Davis. It was reported that they began filming a version last spring with Washington directing, but little has been heard since.

Wilson devotees’ sometimes sniff a bit at the work because it is his most popular and accessible, but Fences remains a portrait of multi-faceted familial relationships good and bad that any audience member can grasp, but brilliantly portrays them as being forged by the social environment of the period.

Note: M Ensemble, which styles itself as the oldest continuously producing African American company in the state, is still waiting to move into its new home in Liberty City next season. This venue in Hadley Park is the third different location this season, so map the location before you go. 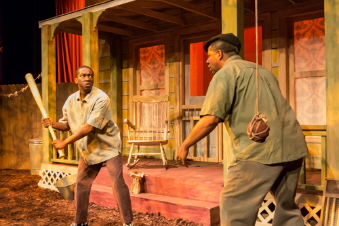