Family, Science, Feminism Evolve In Arts Garage’s Stimulating “The How And The Why” 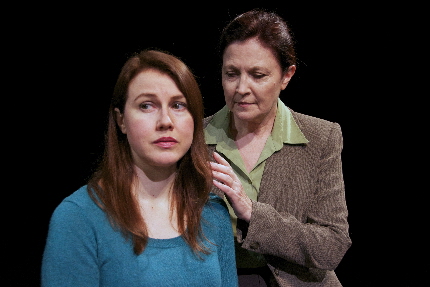 Why do women menstruate?

It’s a question most of us probably don’t ponder very often, because it’s as much a given as death and taxes (though if any Republican males with presidential aspirations have a thought on the subject, I’d love to hear it).

But it’s the most explicit why in The How and the Why, playwright Sarah Treem’s dense meditation on feminism, genetics and biology, currently receiving its southeastern premiere from the Theatre at Arts Garage.

The how of menstruation is settled science. But the reason behind this monthly discharge of blood is still a subject of debate in evolutionary biology, albeit one rarely explored in a male-dominated field. In Treem’s play, Rachel (Elizabeth Price), a graduate student at NYU, has developed a controversial theory that menstruation is a defense against the pathogen-rich toxicity of sperm—a hypothesis that seems to equate high levels of sexual activity with an increase in menstrual blood (a theory offered in real life, and no less scandalously, by evolutionary biologist Margie Profet in 1993).

When the play begins, Rachel arrives at the Cambridge office of Zelda (Laura Turnbull), an eminent professor of evolutionary biology and a board member in charge of a forthcoming conference in her field. Rachel’s menstruation abstract was rejected by the board, and she’d like to know why.

Her meeting with Zelda is immediately awkward—the conversation stilted, the humor ineffective, the gazes indirect, the silences thick with fear, secrets and possibly shame, all of which is conveyed deliberately and commandingly by director Margaret Ledford. Clearly, these two have a history beyond the scientific field they share, and it isn’t long until we learn that Zelda is Rachel’s biological mother, and that this is their first meeting in 22 years. It’s no wonder that Zelda uncorks a champagne bottle at 10 a.m.

It’s the first twist in a play chockablock with intellectual mazes, and the only one I’ll reveal here, at the risk of spoiling the surprises. Suffice it to say that as the play progresses and the protective veneers of these passionate, blustery, defensive women melt away, our preconceived notions of them change as well: As in the best science, our hypotheses are modified upon the introduction of new evidence.

The How and the Why is, though a goodly portion of Act One, inherently difficult to follow. Treem, whose television writing credits have delved thoughtfully into politics and therapy in shows like House of Cards and In Treatment, dives just as deeply into the academic lexicon of evolutionary biology. Lines such as “and it just so happens, in a 1978 study, plasma levels of lactoferrin were found to be twice as high in the endometrium right before menses than during the mid-cycle” are commonplace. The staggering amount of line memorization alone is remarkable; that both actors manage to speak dialogue like this as if they’ve been students of evolutionary biology for decades elevates the performances to the sublime.

But if the first act lacks in emotion what it gains in brains, the show makes up for this imbalance in the second act, set in a Boston dive bar a short time after the conference. It’s as riveting as the first act was heady: Accusations are hurled, secrets are revealed, paradigms shift. One revelation in particular sheds new light on some of the curious choices made earlier in the production by Ledford and Turnbull, revealing their wisdom.

Turnbull’s work is as nuanced and reactive as ever, even when a couple of those impossibly intricate lines slip away from her. She is the more experienced of the two actors, but newcomer Price, a recent acting graduate from FAU whose credits include university productions of Bonnie & Clyde and August: Osage County, is every bit her equal. Both actors expertly navigate their characters’ ever-changing dynamic, from rivals to colleagues to family. Even when Rachel levels her worst invectives at Zelda, Price delivers them with a quiver and a tremble, betraying her character’s inner intimidation.

On the downside, Timothy Watson’s scenic design is merely acceptable, and only minimally realized. It changes from Zelda’s desk and office shelves in Act One to a table, two chairs and vacant backdrop in Act Two, both of which scream for a sense of specificity; when Rachel comments on Zelda’s “masculine” office, the light-wood furniture doesn’t suggest masculinity the way a darker finish might. As for the play itself, Treem doesn’t know how to end it, so that instead of sending us home with its most moving moment, the play peters toward a vague anticlimax.

But any woman who has ever struggled to reconcile family and career, or been forced to jump workplace hurdles just because she was born with an extra X chromosome, will see themselves reflected onstage, engaging in a conversation this country needs to have, and performed with unfailing smarts and compassion. If you’re a man in the audience, you’ll see how your better halves live, and you might consider the privilege you were born into.
And at the very least, you’ll learn more about menstruation than you ever expected to, even if this “why” still awaits further research.

This entry was posted in Performances, Reviews and tagged Elizabeth Price, Laura Turnbull, Margaret M. Ledford, Sarah Treem, The How and the Why, Theatre At Arts Garage. Bookmark the permalink.