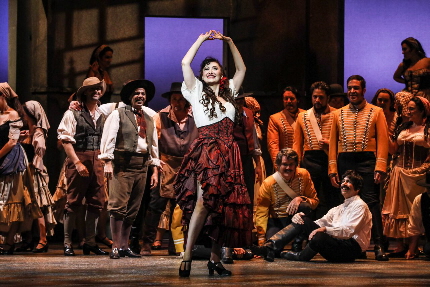 For a century, appreciation of classic operas from the revered canon like Carmen focused on the precision of their execution of established tropes and standards. But with theater revivals, from Hamlet to Hello, Dolly!, the pleasure more frequently stems from the unique visions that individual artists can conjure from  the work.

Oddly, for all the technical artistry that the assembled talents are displaying in Florida Grand Opera’s thoroughly satisfying 10th run at Georges Bizet’s deathlessly popular masterwork, it is the imaginative touches of director Bernard Uzan and his insistence that they singers act that makes this edition memorable from the very first image of bullfighters pulling Carmen’s body from the arena like the carcass of a vanquished bull.

For instance, Bizet wrote incidental passages to introduce and exit the four acts; some directors just let the beauty of the music carry the scenes since there are no characters or words indicated.

But at the end of the second act and just before the intermission, Uzan has Carmen (Maria José Montiel) and Don José (Rafael Davila) spend a couple of minutes wordlessly engaging in the most tender lovemaking that documents their depth of feeling transcending but embracing sexual passion.

This insertion by Uzan balances out the characters’ nearly insane behavior before and later which depict love in so many negative ways from possessive obsession to a sadistic ploy to gain dominance for its own sake.

Between the third and fourth acts, while FGO changes the scenery, Uzan underscores Don Jose’s spiral into madness by pantomiming in front of a black scrim a kind of feverish dream in which he is taunted by three siren-like dancers.

And most notable is Uzan’s choice – with conductor Ramón Tebar’s concurrence undoubtedly – that the traditional recitative (inserted after Bizet’s death and which can add an hour to the running time) is jettisoned in favor of the original dialogue. The spoken word was one of the many elements that alienated hostile audiences and critics back in 1875, along with the depiction onstage of a savage murder and the very idea of examining lives of the working class. This moves the story along faster, but requires the cast to act as convincingly as anyone can in the overheated melodramatic genre of Italian grand opera.

Perhaps it should be a given, but FGO, continuing its fiscal rebuilding, has delivered a lush, impassioned, fully-realized edition that does not scrimp in any department including towering sets from the Lyric Opera of Kansas City, a hundred motley costumes from Canada, and on stage more soldiers, cigarette factory workers, gypsies, townspeople, bullfighters and choruses of ragamuffin children crowding the streets of Seville than populate some small towns I’ve worked in.

And nowhere is FGO’s commitment more evident than the hiring of its opening night principals who switch off every other performance with a second team.

Spanish mezzo Montiel in her FGO debut, appearing with a fall of untamed hair and a defiant décolletage, credibly portrays a woman who would choose death over the loss of independence. The audience are goners the moment that saucy voice launches into the iconic melody of “Habanera” as if she is pouring some rich thick liquid from a silver chalice. Exuding a joie de vivre, Montiel’s Carmen impudently rolls consonants as if her tongue is savoring a gourmet dish. Even if someone turned off the spotlight, she would glow. (Tara Venditti is her alternate).

The Carmen that she, Uzan and Bizet create is a complex creature. The audience sometimes cheers for her spirit of independence, sometimes pities her knowing fatalistic sacrifice of true love for that independence. When she says to Don Jose, “Then kill me or let me pass,” she is intentionally creating a dilemma whose denouement she well expects.

Davila may be a bit heftier than Brad Pitt, more of the country lad that Bizet envisioned, but his tenor unfailingly soared with undeniable passion in his agonized struggles between love and duty.  (His alternate is Alok Kumar.)

The longest applause and most numerous bravas were heaped opening night on soprano Hailey Clark as Micaela, the “good girl” from Don Jose’s hometown. Her lengthy prayerful fretting is expertly carried off from a technical standpoint. But more affectingly, her voice wafts like wind through tree branches believably embodying a purity that ought to seem ludicrous in 2016.

Ryan Kuster’s FGO debut as Escamillio the preening rock star matador began promisingly as the bass-baritone tossed out the Toreador Song, perhaps the best known melody in opera. But he was battling illness opening night; the necessary power in his lower register notes faltered until the orchestra was drowning out his solo lines. Finally, FGO put his understudy Calvin Griffin in the stage right box to sing while the trouper Kuster gamely mouthed the words in his penultimate scene. Griffin reportedly performed the full part the next night.

Tebar as always elicits the best from his orchestra, from the explosive cymbal-crashing overture to the heartfelt string-powered arias. His direction of the musicians and the singers is by turns muscular, pulsating, exotic and poignant.

The atmosphere and energy level is amped up repeatedly by the fiery flamenco choreography of Rosa Mercedes, executed by Betzy Belen Almaguer, Liliana Fagoaga, Edwin Suarez and Carolina Torres.

This is FGO’s third production of this crowd-pleaser in a decade, but it’s calculated draw-in by General Director/CEO Susan Danis to a season that will include Tchaikovsky’s lesser known Eugene Onegin and Jorge Martin’s Before Night Falls which premiered in Fort Worth in 2010 and never seen locally.