Posted on February 1, 2013 by Bill Hirschman 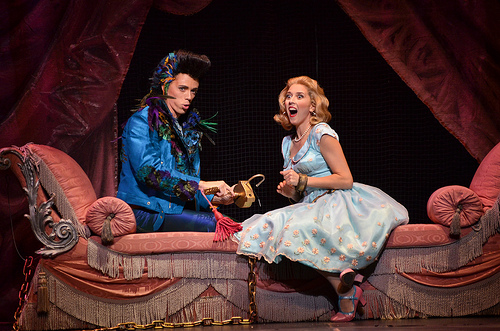 In a classic opera depicting the battle between intellectual enlightenment and romanticism with allusions to ancient Masonic rituals, you don’t expect a character to exclaim, “Mrs. Robinson, are you trying to seduce me?”

But this is director Jeffrey Marc Buchman’s whimsical take on Mozart’s The Magic Flute, one of the most popular operas of all time, in part, because its inherent irreverence begs to be enhanced with goofball humor and imaginative re-interpretations – both of which mark the Florida Grand Opera’s edition.

Musically, conductor Andrew Bisantz assuredly leads the orchestra and cast through a faithful and satisfying rendition of Mozart’s score with some strong if not stunning performances. 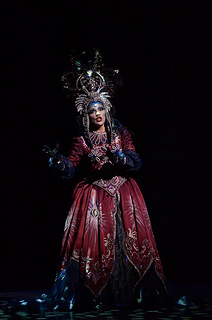 The most obvious highlight was Jeanette Vecchione’s local debut as haughty Queen of the Night. Her first act aria lacked some of the fire you long for, but she dexterously negotiated the legendarily difficult second act coloratura aria that encompasses an F over high C amid a carbonated bubbling of pearly trilled notes.

But it’s Buchman’s vision that stands out. Before he transports us into this Alice-In-Wonderland fairy tale, he frames the opera as a Wizard of Oz brand dream in which a 21st Century teenager goes to sleep with a copy of the story during the overture and awakes to face a threatening dragon much larger than the stuffed one his brother taunted him with a few moments earlier.

From there, our hero Tamino falls in love with the portrait of Pamina, the daughter of the secretly evil Queen, and sets off to rescue her from the secretly benevolent King Sarastro who has kidnapped Pamina for her own good. Tamino must win Pamina’s hand by undergoing tests, not of strength, but of virtue. Right. The strength of Flute is the scamp of a birdcatcher Papageno, who never passes up a chance to cut up in the tradition of heroes’ comic sidekicks going back to Aristophanes.

The opera, which was written in German rather than Italian and included spoken dialogue rather than recitative, was meant to be accessible to the everyday theatergoer. Buchman is on board with that. He has inserted or rewritten lines in English vernacular and delivered in German that show up in the supertitles as, “I’m out of here!” or “Fighting’s not really my thing.”

Most of the applause at the curtain went to soprano Lisette Oropesa making her FGO debut as the dewy Pamina, recognizing her passionate declamations of love and heartbreak. Andrew Bidlack’s muscular tenor provides a solid presence for Tamino, investing plausibility in his otherwise credibility-stretching declaration of love to Pamina’s portrait.

But the real star is Jonathan G. Michie as Papageno who Mozart, librettist Emanuel Schikaneder and Buchman gave a license to steal every scene he’s in. Dressed like a punk rocker in an electric teal leather jacket and bewigged in a cross between Steven Tyler’s mop and Elvis’ pompadour, Michie revels in the sophomoric humor such as delivering the Mrs. Robinson line to the advances of Papagena in disguise as an elderly woman. He’s so funny that it’s easy to overlook that his full-bodied baritone is perfectly able to deliver the demands of the music.

Not every musical moment landed. Jordan Bisch has a smooth bass as Sarastro but the orchestra drowned out some of his lowest notes. At least one or more of the three boys portraying the guiding spirits was flat opening night.

The production values include lavish fanciful costumes and fluid if simple sets, both rented from the New York City Opera. The queen’s headdress has enough sparkling surfaces that the audience’s eyes are dazzled as if she was a walking glitter ball. For counterpoint, Pamina wears a 1950’s party dress; Tamino spends much of the evening in pajamas and then dons blue jeans and gym sneakers.

For a two and a quarter-century old classic, FGO turns The Magic Flute into a hoot.