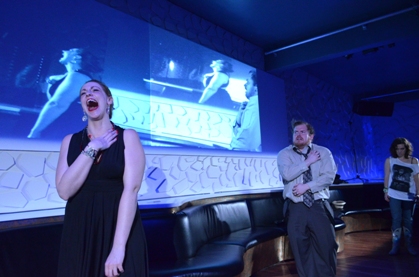 Hell is other people, especially Riley Svatos singing her lack of heart out to Casey Finnigan in Florida Grand Opera’s off-beat No Exit

A South Beach bar may seem like an unlikely place for an opera. Club music pulsates, a bartender pours a vodka — olives, please, no lime.

There’s no set, per se, in the room toward the back of the Arena Lounge (formerly the NoWhere, which probably made more sense to Florida Grand Opera when they were searching for an unusual venue).

Bathed in red light, chairs are lined up facing a long, leather couch that’s attached to the wall. It extends from one end of the front wall of the room to the other. Above that, there are projections that switch and change almost to the beat of the music. There are photos of a traffic jam near the Tamiami Trail, a kid crying on an airplane while her mother tries to desperately get her to stop; there are religious images, and illustrations that look like they are taken from sci-fi fantasy comic books. Ah, so if these are images of someone’s Hell, I’m in the right place.

Welcome to No Exit, part of Florida Grand Opera’s Unexpected Operas in Unexpected Place series. The Unexpected Operas initiative began with a grant from the John S. and James L. Knight Foundation. The idea is to expand the reach of opera in South Florida by creating bold and modern productions presented in non-traditional venues. Yes, looking around the room at the 10 p.m. performance, No Exit attracted a definitely younger than usual operagoer.

Now, about the opera itself. Andy Vores, chair of composition at The Boston Conservatory, was commissioned to create a new work for the Boston-based ensemble, Guerilla Opera. No Exit was it. In 2008 it opened in Boston. Vores adapted his opera based on Existentialist philosopher Jean-Paul Sartre’s 1944 celebrated play of the same name. No Exit is about three damned souls, Inez, Estelle, and Garcin, who are condemned to spend all of eternity together in a room with no exits, which they eventually discover is Hell.

Vores’s noisy, raucous score plays it sleight with soprano sax, viola, cello and percussion. Its scratchy, screechy entrance creates the necessary edginess, but then, during the 80-minute unbroken score, there are moments of impact as the characters’ claustrophobia builds. Is it entirely possible that Vores purposely selected a quartet of musicians and a quartet of singers?

Baritone Carlton Ford sings Valet, the convivial host, who ushers the three individuals one by one into the room. Ford  has an easy movement about him and a rich, commanding presence in both voice and style. Mostly Ford’s task throughout the opera was to create videos projected behind the singers that looked noir-esque.

No doubt, director Jeffrey Marc Buchman took the original name of Sartre’s play to heart, Huis Clos. The original title is the French equivalent of the legal term “in camera,” referring to a private discussion behind closed doors. It was a smart and effective tool that added dimensionality to the staging.

Tenor Casey Finnigan was the first to be ushered in to the room. Finnigan sang the impatient Garcin with just the right impudence. While looking seemingly innocent (why would this man have been damned?) he began to tell his story of how he ended up down below after taking “12 bullets to the chest.”

Inez was the next to be shown into the room. Caitlin McKechney, dressed like a rocker chic with a T-shirt, jeans and gray cowboy boots, and black painted nails, was definitely the one to watch. The mezzo-soprano played Inez previously in the Chicago Opera Vanguard production. Her comfort with the role showed as she slinked and exuded the requisite sensuality needed as the seductive and crafty lesbian who manipulates both Garcin and the third damned soul, Estelle.

Lyric soprano Riley Svatos rounded out the singers as Estelle, a bejeweled, lipsticked, cocktail dress-wearing socialite who possessed her own deep, dark secrets. Svatos had the task of having to play off of both McKechney and Finnigan at different times, and the nuance of her voice as she volleyed notes off of the mezzo and the tenor was exceptionally elegant.

This was an exceptionally satisfying night with the intimate setting putting the talented performers so close and within reach.

Michael Sakir and Zoe Zeniodi shared music direction for the intricate production and, with its many demands, the orchestra was spot on. Zeniodi conducted while Sakir played keyboard. Other instrumentalists were Frank Capoferri, soprano saxophone, Ross DeBardelaben, viola and Ryan Hecker, percussion.

With its ingenious, acrobatic score, and exceptional singers who could handle both the drama and the demands, FGO’s No Exit may have been a depiction of hell, but the production was hot damn perfection. The only regret was that this was a three-day run.
If you must, go through heaven and hell to get to the final performance of this production. It’s a once in lifetime experience.

This entry was posted in Performances, Reviews and tagged Florida Grand Opera, Jean-Paul Sartre, No Exit. Bookmark the permalink.