GableStage’s Informed Consent: Is The Search For Truth Paramount? And Whose Truth? 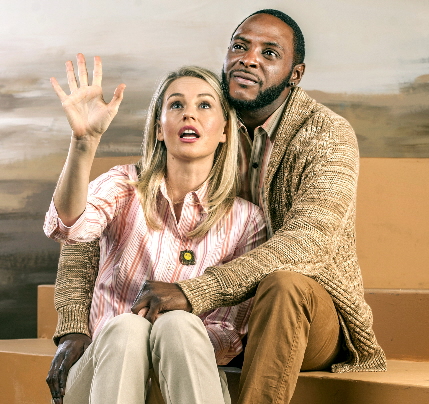 One is a genetic anthropologist explaining the biological intricacies of DNA to her four-year-old daughter.  Another is a children’s book author detailing a fairytale about a young princess and a dragon. A third is a Native American retelling an ancient legend of deities who created the Grand Canyon that gave rise to their tribe.

The irreconcilable world views inhabiting those narratives exemplifies the questions swirling around this theatrical centrifuge of ideas:

Is knowledge always good? Is its pursuit inherently defensible regardless of the consequences? Is there Absolute Truth? Is truth just the result of people building their lives around their personalized perception, vision and traditions? What is the true nature of scientific inquiry? Should it trump every other human concern? Are we what we are or what we believe?

These and another half-dozen ideas careen and crisscross GableStage like electrons colliding in a chain reaction, battling for dominance in profound intellectual struggles that only the audience can adjudicate

The triumph of the production, directed by Laufer, is that the human costs and values at risk are never lost. Indeed, they are channeled through the lives of its protagonists who are passionate, funny and propelled by their beliefs.

Describing the premise makes it sound dry and esoteric; at worst a dull philosophical paper delivered on stage, at best a post-midnight dorm room debate. But the recitation does not communicate the moving journey depicted in easily relatable human dimensions.

The play is set up as a group of five storytellers playing various roles to unreel the story of Jillian (Betsy Graver), a brilliant, vibrant and driven geneticist. The group erases the boundaries of chronology and geography with playful humor.

Jillian’s mother died of early onset Alzheimer’s when Jillian was a child and was about the same age as Jillian is now. Testing already shows Jillian has a 50 percent chance of having the genetic timebomb; later we will learn that the prognosis is really 100 percent.

Sensing the clock ticking, Jillian accepts a commission from an elderly sociologist Ken (Carlos Orizondo) to study an isolated tribe living at the bottom of the Grand Canyon. They are losing limbs and lives at ever earlier ages to an epidemic of diabetes. She tells Ken that she wants to test their blood to seek genetic codes that could point toward a cure, but in fact, she wants to conduct far more extensive tests to seek a cure for the Alzheimer’s genomic string that she fears she has passed on to her four-year-old daughter (played convincingly by an adult Francisca Munoz).

Jillian is a decent, caring and inexhaustibly earnest person, but she privately discounts concerns from Ken and young tribal leader Arella (an equally convincing Munoz) that science and the tribe’s lore are mutually exclusive. Arella is suspicious of anything to do with the white man’s world that has eroded the tribe’s traditional life. But she is persuaded that the survival of her tribe – and that of her own daughter—lies in the balance. Arella agrees to convince tribe members to sign the informed consent forms so Jillian can draw their blood, itself a seeming blasphemy violating the tribe’s tenets.

Amping up her heedless quest, Jillian perceives that she is beginning to succumb to the illness, and worries how to handle its onset with her daughter and her husband Graham (Jovan Jacobs), a gentle children’s fiction author. Instead, her single-minded campaign – simultaneously altruistic and personal – begins to cause ripples of damage that grow and grow.

The inevitable spiraling descent in this no-win scenario plays out in the last few scenes as a heart-rending tragedy that may well upset Boomer caretakers dealing with the increasing disability in loved ones. The fear of encroaching Alzheimer’s is clearly depicted from the inside view of the future victim as well as her family.

Along the way, the characters wrestle with even more questions such as whether it’s better to know that you might be susceptible to a crippling illness, and do socially-sustaining myths have equal standing with scientific truth.

Laufer really doesn’t take sides, not simply because the questions may be ultimately unanswerable, but because the questioning itself may be the overarching virtue of sentient human beings, a pursuit that is beautiful and awe-inspiring even if it is tragic as well. In the end, she seems to acknowledge honor is due the worth of everyone’s story.

Audiences wanting to passively experience the evening likely will be overwhelmed although few people complain about a night with Tom Stoppard’s cyclotronic musings. But it’s possible to enjoy the evening by just letting the conflicting emotions wash over you and plugging into emotionally-charged scenes such as Jillian’s last memories of her mother who could no longer recognize her.

In her curtain speech opening night, Laufer noted how grateful she was and how unusual it was for a playwright to be able to direct her own work – which she also did at Theatre Lab in Boca Raton this season with The Three Sisters of Weehawken. Able to riff off her specific vision, Laufer knows how to stage this highly theatrical story with an agile fluidity. She also easy switches among wry narration, gentle humor, painful reminisces and the tragedy when well-intentioned hearts and minds cannot co-exist. She teases the audiences with the Brechtian storyteller framework, even to the point that when a character starts to go down a narrative blind alley, she is chided by the other storytellers. Another advantage is that she directed Graver and Elizabeth Dimon, the fifth narrator here, in the Theatre Lab piece.

Graver, who once specialized in ditsy roles, has proven herself over and over as an insightful passionate actress who exudes intelligence and brings the soul of a character out of her marrow. Her work in Arts Garage’s two-hander Lungs and GableStage’s Venus In Furs are unforgettable. Here, she fearlessly allows the audience to see not just Jillian’s justifiable motivations, but also how they have compelled her past being able to realize how it might damage those around her. But any time the audience becomes aghast at her headlong charge, Graver effectively delivers one of Laufer’s speeches about the glory of pure science — and audiences’ allegiances change for the seventh or eighth time. Graver/Jillian’s unbridled enthusiasm for the virtues of science shimmers as she fervently spins her somewhat beyond-the-immediate-facts vision of science’s potential to create immortality two generations hence.

The rest of the cast is just as good as they inhabit different characters. But Munoz delivers the crucial yin to Jillian’s yang. While her Arella has unwavering respect and veneration for tribal traditions, she believably adds Laufer’s third dimension of a young woman who has lived in an outside world that has adopted the pragmatism of science as Truth (unless you work in the White House).

Jacobs provides a crucial balance as Jillian’s husband. Jovan makes Graham’s severely-tested love credible by communicating his ability to see the genuine beauty of the human being beearth and beyond her obsession with science.

Laufer is known in this region for her work with Florida Stage and other troupes with the premiere or early productions of The Last Schwartz, The Gulf of Westchester and End Days.

The story is played out on a series of beige platforms arranged by Lyle Baskin; much of the snap-sharp changing sense of place is accomplished with the multi-dimensional lighting of Jeff Quinn.

Some people might prefer a less dense challenge on a Saturday night, but for most others, Laufer’s shattering drama defines the much-abused term “thought-provoking.

Informed Consent runs through June 25 at GableStage, 1200 Anastasia Ave., Coral Gables, inside the Biltmore Hotel. Performances generally at 8 p.m. Thursday-Saturday, 2 p.m. and 7 p.m. Sunday. Runs 90 minutes with no intermission. Tickets are $45-$60. For tickets and more information, call 305-445-1119 or visit GableStage.org