Marquee’s Millie Is Blessed With Those Classic Broadway Voices 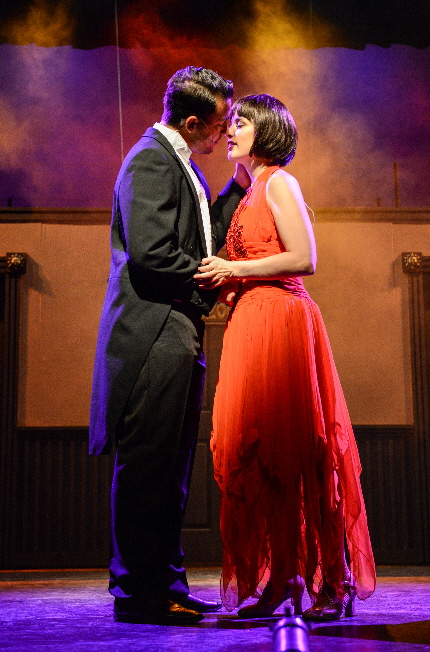 The classic Broadway musical voice is like no other. Even when the score is mimicking another genre, it’s still distinctive.

Adjectives can try to capture it: strong, full, rich, expressive and a host of others. But it’s sui generis – you can’t really describe it except to say that it’s not opera, it’s not pop of any generation, it’s not rock n’ roll, hip-hop, soul, jazz or folk. It’s not even the same sound: Ethel Merman’s brassy fanfare or Barbara Cook’s ice cream smooth soprano both belong.

The only way to know it is to hear it. Fortunately, you can hear a raft of such sounds coming from the cast of Marquee Theater Company’s production of Thoroughly Modern Millie.

This fledgling professional company in Boca Raton takes another step forward in its development with this frothy spoof, skillfully mined from the 1967 movie which became a full-fledged musical created in 2000 by Jeanine Tesori, lyrics by Dick Scanlan, and a book by Richard Morris and Scanlan.

Marquee battles the slightest whiff of community theater with its ambitious but home-grown sets and an ambience operating out of the same West Boca Community High School auditorium that also gave birth to Slow Burn Theatre.

But director Andrew Shultz, choreographer Ben Solmor and musical director Paul Reekie have hired and molded an entire troupe blessed with those strong, subtly supple voices. It’s a young cast, some are still in college, some are still in high school. Yet not only do all the leads have that voice, not only do most of the supporting actors, but you can hear even those sounds among the ensemble.

The basic story borrowed from a 1957 British comedy places the tale in that Never Neverland of 1922 New York City with speakeasies and glamorous galas, bobbed gals in flapper dresses and gents in formal tuxedos with tails. It’s a world in which the unrestrained ambition to achieve wealth and status is an unalloyed virtue.

Enter a young émigré from Salina, Kansas, Millie (Alex Frost) whose irrepressible optimism is infectious. Her wryly funny determination as a new “modern woman” is focused on working for a rich boss and marrying him irrespective of such extraneous elements as love.

Minutes after her arrival in the Big Apple, she is, as must happen in musicals, robbed of everything she has. She seems chastened for about three seconds, singing. “I ain’t got nothing,” then exclaiming happily, “So I ain’t got nothing to lose.”

In less than a week, she has taken up residence at an actresses’ hotel run by the suspicious Oriental owner Mrs. Meers (Jordana Forrest); met her new best friend, the flouncy but lovable Scarlett O’Hara clone Miss Dorothy (Shalia Sakona); got a job as a stenographer at Sincere Trust; started to put the moves on her new boss Trevor Graydon (Michael Cartwright); and been distracted from her goal by a devilishly handsome New Yorker Jimmy (Bruno Faria.) 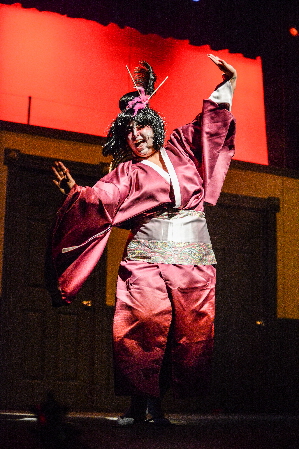 And finally, everyone ends up at parties thrown by widowed millionairess Muzzy (Nicole Dikun) who seems to have a sideline as a torchy blues singer.

You’re supposed to be able to suss out the rest of the plot long before events happen; that’s part of the charm. But everyone on stage is acting the ludicrous events with complete conviction; the only ones winking at the audience are the writers.

The lyrics are surprisingly witty (and clearly enunciated here) and the score by Jeanne Tesori is a penny-bright gem unlike anything she wrote later for Violet; Caroline, Or Change; and the Tony-winning Fun Home (although she also composed Shrek the Musical presumably to pay off a gambling debt).

Shultz capably stages the evening lickety-split with a jocular tone. Solmor’s choreography enthusiastically riffs off the Charleston and stages joyous tap dances with Shultz’s help, well-executed by the entire cast.

All this is backing into the production’s primary asset: that cast and those voices honed into the same style by Reekie.

The role of Millie, which requires a magical likeability, made a star out of Sutton Foster when she was pulled from the chorus because Kristin Chenoweth didn’t want to take the show past a tryout. Alex Frost has that same vibe with her leading lady voice that sparkles and brims with energy. Without being obvious, she carries the show from her opening musical declaration of independence “Not for the Life of Me.”  Frost is a native Floridian now based in New York and hopefully she’ll be back.

Faria, who made his mark in Slow Burn’s Bonnie and Clyde, wields a warm charisma and a supple voice that caresses the score like a Fred Astaire who can actually sing. His heartfelt solo “What Do I Need With Love” is an effective cry of the heart from someone who thought he was, indeed, beyond that. Incidentally, he reportedly played the part when he attended this high school a decade ago. I don’t know what his day job demands are, but he’s seen too infrequently here.

Sakona’s day job is as a commercial litigator in Miami. But she embraces the fluttery, ethereal Miss Dorothy with a sweet assured soprano that sounds right for an operetta. Sakona delivers the crucial sense that the dewy Miss Dorothy is not quite the helpless naif she purports to be.

Cartwright has had supporting roles at The Wick Theatre and solid parts at Lake Worth Playhouse. But once again, it takes a small company like Marquee to give people like him a chance to show what they can do. Built like a New England Patriots half-back, the square-jawed Cartwright combines comic physical abandon with a booming baritone. Physically an odd couple with Sakona, he melds perfectly with her in their faux Nelson Eddy-Jeanette MacDonald duet medley “Ah! Sweet Mystery of Life/Falling in Love With Someone.” He also shines in the hyper-rapid Gilbert & Sullivan patter song pastiche “The Speed Test.”

Forrest has been working in the region for years as an actress and teacher, but once again, Marquee is giving her a chance to strut her chops as the delightfully corrupt Mrs. Meers. Sporting one of those Merman-like voices, she shatters the auditorium walls when Meers drops her Chinese persona (a disguise to hide from the cops) and weighs into a couple of Miss Hannigan vaudeville numbers. She chews the scenery with gusto, although it’s hard to understand her when Meers affects a pidgen Chinese accent. 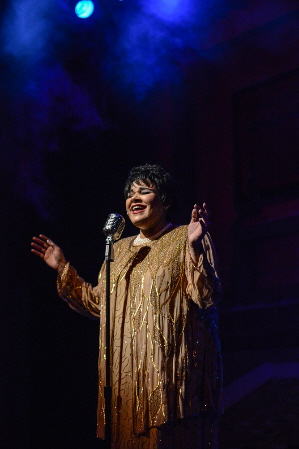 Dikun’s character has some plot purpose, but Muzzy’s real dramaturgical job is to juice up the proceedings with cabaret showstoppers “Only In New York” and “Long As I’m Here With you.” Dikun does just that with style and sophistication.

Props are due sound designer Traci Watkins, stage manager Jonathan Louis Rinder and assistant stage manager Cheryl Crout for producing the clearest, cleanest, sharpest cued and most comprehensible sound we’ve ever heard that aural barn of a high school auditorium. The orchestra is on digital media, but it’s a strong full sound that no slimmed back orchestration could match with a live band.

A nod, too, to producer Miles McKee who either allowed or enabled Solmor’s dead on costume parade and for underwriting a 24-member cast — what may be the largest dancing ensemble any professional company has hired locally.

Marquee is still an evolving company trying to attract an audience beyond friends and family. But, believe it, it’s a shame that this production isn’t Carbonell Award eligible – many elements would have given other companies a run for their money at next winter’s deliberations.