Glad To Be Conned By Stage Door’s Dirty Rotten Scoundrels 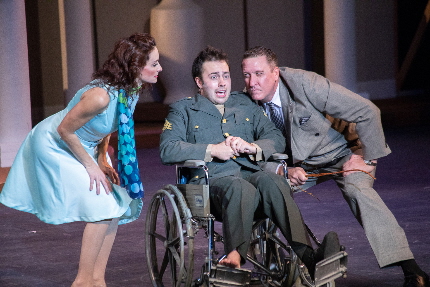 It’s a genuine compliment when a critic doesn’t particularly look forward to a show based on past productions and recordings – and then reassesses his antipathy based on seeing a fresh new production.

As a kid, I liked the 1964 film Bedtime Story starring David Niven, Marlon Brando and Shirley Jones. I loved and still love Frank Oz’s 1988 hilarious scrumptious reinvention as Dirty Rotten Scoundrels with Michael Caine, Steve Martin and Glenne Headly. But I’ve been lukewarm at best about the David Yazbeck-Jeffrey Lane 2005 musicalized version that starred John Lithgow and Norbert Leo Butz. It wasn’t a tenth as funny or entertaining, and frankly simply had no reason to exist other than to exploit the title of the popular film.

So it’s saying something that Broward Stage Door’s Scoundrels in its new home in Lauderhill is a pleasing romp with a director who knows how to enhance the comedy Lane laid in, a cast having an infectiously good time, a lively band on stage and some unidentifiable magic that finally shows just how witty Yazbeck’s lyrics really are.

It’s a sustained smile to watch Michael Cartwright as the tall cultured under-control Lawrence Jameson and Matt Kurzyniec as the short maniac goofball Freddy Benson competing for a pigeon’s money or sexual favors. Both are unabashed materialistic rogues; Jameson just has more class than Freddy’s gaucherie.

Jameson makes his conquests by weaving suave seductions along with a ludicrous story that he is a mittel-European émigré prince needing funds to lead a counter-revolution. Freddy just goes up to an attractive target, looks deep into her eyes, and says, “I didn’t know angels had such beautiful… breasts.”

Initially, Jameson takes on the ham-handed small-time Freddy as a student of his more subtle and profitable approaches to scams, including enlisting his help escaping a marriage by posing as his slobbering mentally defective brother.

But as Freddy becomes more accomplished, Jameson is concerned that this wild card will upset his long-cultivated reign. So he wagers Freddy a loser-leaves-town bet based on who can get $50,000 first out of the newly-arrived naif, Christine Colgate, the American Soap Queen (the wonderful Sabrina Lynn Gore).

If somehow you don’t know what happens next, we won’t spoil it. But there are unexpected reversals and a lot of unadulterated fun with all the intellectual subtlety of a Saturday Night Live skit. The show is shot through with cute repartee, blue humor and droll winking as they break the fourth wall. At one point, one of the marks shows up after intermission even though her story seems to be over. She explains, “I can’t believe I can’t be useful to someone in the second act.” Which of course she is.

The current script has been tweaked (by Lane perhaps, but also the Stage Door crew) to gig Obama, Trump, P. Diddy, Boca Raton, Lauderhill and bacon. In the production number in which Freddy talks about what a big score will make possible, he says, “I can finally afford a ticket to the Maltz.”

The show still has extraneous musical numbers whose sole point is, well, it’s a musical and, well, you have to have musical numbers. Case in point, there’s a production number in which a targeted mark plays out her plans for a dream wedding back in Oklahoma. That becomes a silly protracted hoedown that is unnecessary and doesn’t advance the story at all – it’s just someone thought they needed a dance number here.

Further, unlike in the two movies, Muriel, a secondary mark, has an affair with the con men’s chief criminal accessory – the local police chief. Again, the sole reason is because the Official Broadway Musical Handbook dictates that musicals must have a secondary Ado Annie-Will Parker subplot, even though the two films managed to satisfy audiences for two hours without it.

But here’s the aggravating rub for this critic: All of these unnecessary detours and even the unnecessary musicalizations of famed moments are undeniably entertaining. This cast, under the staging of Clayton Phillips and musical director David Nagy, savors the puns, the ribald asides, the nimble lyrics, the opportunity to uninhibitedly indulge their brassy voices and physical clowning.

Kurzyniec especially revels in the undeservedly over-confident and over-the-top vulgar schlub. His eyes roll, pop out of his head and twinkle at passing pulchritude.  Spending much of the show in a wheelchair, pretending to be paralyzed from the waist down to lure Christine, the upper half of his body performs more adroitly than some hoofers.

Cartwright, spotted in secondary roles around the region for a few seasons, is having just as much fun in a lead role worthy of his talents.  Even dressed in a double-breasted suit, the broad-shouldered man does look like a former linebacker without the suavity of Niven or Caine. But that further fuels the comic element of the role, especially as he unleashes a muscular voice and the gleaming persona of a trickster who loves what he does.

Gore, whose wide acting range just in the past year has conquered such roles as the the tragic housewife in Next to Normal, is perfect as the seemingly open-hearted Ms. Colgate, willing to liquidate her life savings and her father’s to pay for Freddy’s treatment.

But a real standout is Aaron Bower (Sarah in the Wick’s Guys and Dolls) as Muriel from Omaha, a tall cool elegant blonde divorcee with a world-weary knowledge of how disappointing romance can be. Although a minor character in the films, Bower’s “The Gentleman Is A Dope” characterization and her champagne-rich mezzo delivers a multi-dimensional performance.

Michael Kreutz is the corrupt police chief who has an affair with Muriel, and Laura Titus is the ebullient two-stepping Oklahoma heiress.

Pianist Nagy leads a band with the ever dependables—Brian Sayre on drums, Martha Spangler on bass and providing essential woodwinds Andrea Gilbert. Danny Durr has become a Stage Door regular whose choreography can sometimes be memorable or just average. But his work here is among his best with crisp, swirling movement, legs shooting toward the sky to create the elegant ambiance, and alternatively appropriately cartoonish as in the Oklahoma number. The ensemble of actor-singer-dancers includes Cat Pagano, Alexandra Van Hasselt, Alexandra Nicole Garcia, Vincent Pelligrino, Sebastian Goldberg, Chris Hendricks, Austin Carroll, Marty Craft, and the iridescent Sarah Rose Knoche.

Since Stage Door moved into the Lauderhill Performing Arts Center this year, the new home has not only given the theater more resources, but the general feel of its  productions has taken on an extra polish.