Vogel Encourages Dramaworks To Use Indecent Script As Blueprint Not Straitjacket 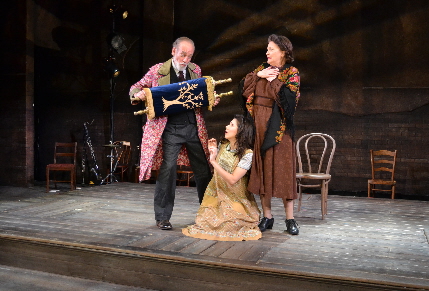 One of the scenes in Asch’s God of Vengeance that led to its being criminally charged, depicted in Palm Beach Dramaworks’ Indecent / Photos by Samantha Mighdoll

Playwrights like Edward Albee and David Mamet kept a chokehold on theaters’ interpretations of their works.

But Paula Vogel welcomes, even celebrates how imaginative directors and committed casts use her work as a starting blueprint for their own explorations.

“This is the astonishing gift that we get as playwrights,” the author of 2015’s Indecent said in a phone interview. A play “can’t be reproduced. It has to be made in each and every spot anew, and so it has to be the vision of the people who work on it.”

So she is pleased that this week the team at Palm Beach Dramaworks will unveil their particular vision of Indecent, just one of 20 productions that have been or are being mounted around the country last season and this season. 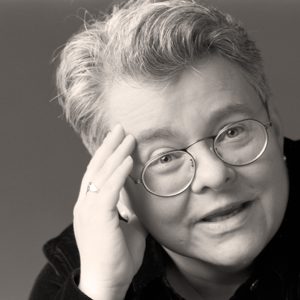 “Every single production is going to show you the remarkable gifts of the local collaborators,” said Vogel, a beloved playwright, teacher and mentor whose How I Learned To Drive won the Pulitzer Prize in 1998.  “What I used to say… is I have made my quilt. Now you have to make your quilt…. I kind of write the script and get out of their way.”

Indecent is a complex piece that virtually invites a director to indulge in highly theatrical staging, partly a result that the script was developed with its original director Rebecca Taichman.

But Dramaworks’ director, J. Barry Lewis is a fervent believer that the core of the text, as indicative of the author’s wishes, must drive any production.

“Granted, we always want to try to find new avenues, but that’s a bit of a trap,” Lewis said. “Sometimes the issues have been so well defined and so well brought forward that they’re one and the same and you can’t separate them.”

He know, “There’s the conversations that you want it to be fresh and new. But at the same time you don’t want to…. reinvent a wheel that was designed not to work this way,” Lewis said.

For them, the individual stamp of a production comes from “who you cast and then you play to the strengths of that cast,” he said.

The drama’s premise is relatively simple: A ghostly troupe of dead actors appear in a dilapidated deserted theater to trace the 46-year production history of a 1906 Yiddish-language play, God of Vengeance by Polish writer Sholem Asch.

Asch’s work tells of an Orthodox Jew named Yekel who runs a brothel in the basement of his home. Yekel believes that if he can find a righteous husband for his innocent daughter, Rifkele, and have a Torah scroll created as a gift to the couple, he can earn respect and make amends with God. He is unaware that Rifkele has fallen in love with Manke, one of his prostitutes.

The ghost troupe depict the efforts of a now-dead Jewish theater company to produce the work across several countries. Interspersed are scenes from Asch’s play including the two most controversial vignettes: the hurling of a Torah across the stage and a tender love scene in the rain between Rifkele and Manke. When the troupe took an English-language version to Broadway in 1923, the actors were arrested for obscenity. While some observers claimed the play was anti-Semitic, the underlying complaint was that it portrayed homosexual love in a positive light.

Indecent employs seven actors and three musicians in a journey rife with Klezmer music and folk dance. It flits across decades and countries as the Jewish troupe puts the play on in many countries until the Holocaust claims them. The time travelling and the fact that each actor plays multiple roles in Vogel’s play and Asch’s play-within-the-play requires audiences to pay close attention.

Award-laden productions off- and on- Broadway were acclaimed by audiences and critics. One reason is the work has many themes layered on top of each other. It embodies the classic truism that in portraying unique ethnic, sexual and historical specificities of a period, any audience in any country in any age can identify resonating universality.

For Vogel, “One of the difficulties of the play is trying to figure out how to do an elevator (pitch) about it. Because it’s a love story on many levels, and, yes, it mirrors what’s happening in this country in terms of intolerance and division and censorship and hate speech. Immigration was one of the reasons I said yes to the project. But I think it speaks to a nobility of spirit that we possess that we might forget when we’re in times of fear.”

For Lewis, “You can look at this story from 20 different angles.  At the heart of this story is the essence of how love triumphs and… the universality of love whether it’s pure and chaste or whether it’s between two men or two women or a man and a woman… the utterance of love in its innocence and purest form…. It also deals with immigration initiatives, with the diaspora in crises, that we are finding repeating themselves in ways today.”

Wise added to the list, “The prejudice against the Jewish immigrants. I think for me something that stood out was this idea of the responsibility of artists. You know there’s this idea of never forgetting. It’s our responsibility to tell these stories… and it’s like, you know, unless we tell the story it will be forgotten.”

A key element in Vogel’s play and Dramaworks’ production is the recreation of Yiddish theater both in Europe and as one of the foundations of American drama.  Dramaworks hired renowned local actor Avi Hoffman, who recently played Willy Loman in Yiddish in New York, to school the cast on the history and zeitgeist of Yiddish theater. While some actors like Marcus have performed a bit in Yiddish, some like Wise have no experience to it as an actress.

Depicting the Jewish aspect was as important to Vogel as the public outrage and private purity of the two women’s love.

“It was my opportunity to reclaim my Jewish heritage. My grandmother came to this country from Russia in 1905 when she was a baby. Yiddish was spoken in my grandparents’ house. And I’ve long loved Yiddish theater. For years I told people I’m a Lillian Hellman Jew because we have the same heritage: lapsed Catholic mother from New Orleans and the Jewish father from New York. But I have converted and I am Jewish and I’m really glad that I got this opportunity to explore the legacy.”

This production hit a minor snag a few months ago. Initially, it was planned as a long-planned co-production with GableStage in Coral Gables. But Actors Equity would not allow actors to work at one pay scale enabled by Dramaworks’ larger auditorium and then take a pay cut to work in GableStage’s smaller venue. So GableStage will mount its own separate production (with some roles already cast) at the end of January.

To have different visions of the same show 75 miles apart must please Vogel who prizes regional theater.

“I am so grateful to the companies small and large… When it was first done, it was in the theater of 120 seats.” She laughed. “You know I’ve come to Broadway a little bit late on the curve and I don’t really think about the marketplace. Instead, I think of (whether) we have created something in a community that can make us have a conversation.”

Still, penning a play that has been officially listed as one of ten most produced plays in regional theaters last season, is cause for measured pride.

With bemused wryness, she said, “You know every now and then you spend you know a decade on something and it actually turns out to have has a happy ending.”

Indecent runs Oct. 19-Nov. 11 (previews Oct. 17 and 18) at Palm Beach Dramaworks, 201 Clematis St., West Palm Beach. Show times are 7:30 p.m. Wednesday, Thursday and some Sundays; 8 p.m. Friday and Saturday; and 2 p.m. Wednesday, Saturday, Sunday.  Individual tickets are $75, with specially priced preview tickets at $55 and Opening Night tickets at $90. Student tickets are available for $15, and Pay Your Age tickets are available for those 18-40. Tickets for educators are half price with proper ID (other restrictions apply). Call (561) 514-4042, or visit palmbeachdramaworks.org.