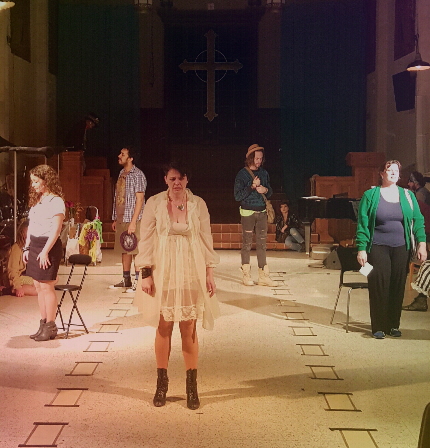 The scruffy damaged denizens of New Orleans’ underclass depicted in the musical The Journey: The Story of Your Life really only have one dimension and the subtlety of a freight train, but, good God, the power that this cast and creative team from Outré Theatre Company invest in that one dimension is overwhelming.

The entire production in Miami Beach reminds you of Spinal Tap where the amplifiers have a maximum setting of 11 and, indeed, this show blasts away for better and worse at 11 in volume, energy, passion and talent.

This musical tragedy by Kristen Long and C. Stefan Morrisette, which swirls about a saloon singer’s fatal descent into substance abuse, is far, far improved over the troubled workshop concert that Outré gave in 2013. Trimmed and sharpened, it still has significant shortcomings, especially a plot and dialogue that may be semi-autobiographical but has the disappointing simplicity of a fable or a comic book.

Yet the eclectic score of kick-butt rock and impassioned ballads by Long (with Walter Brewer and James Cook) far outweighs any weaknesses, especially sung by a cast with uniformly glorious voices that could be heard across Biscayne Bay. On the other hand, the band was so unnecessarily loud that a huge amount of the lyrics were unintelligible when three or more people were singing.

Another asset is that the musical, created as if scrappy street buskers gathered in Jackson Square to retell a shared folk tale, is suffused with the joyous celebratory energy of Mardi Gras and the nuclear power of their fervor.

This is especially evident in the performances. Although the show apparently went into rehearsals with a different actress, the lead part was taken over by Long herself who could not be bettered in her vocal chops and her ability to infuse her singing with a bottomless depth of emotion. She and her entire company rip the psychic DNA out from the marrow of their bones and lay it out on stage like a sacrifice to the audience.

The Journey is being produced by Outré, Long’s LLF Productions and Arts at St. Johns, a church/school/arts collective where the musical is being staged in the sanctuary dominated by a huge cross.

The story looks at five interrelated residents who have come to New Orleans to make their dreams come true and find fate is impossibly stacked against them.

The heroine is Phanny Brown (Long), a talented up-and-coming jazz singer in a Bourbon Street bar who is acclaimed as “the voice of the age.” Her roommate is a bar girl Nicole (Courtney Poston) who has escaped her nice girl origins in Savannah where everything was predictable and planned out for her. Nicole has taken in a mangy ne’er-do-well but sexy painter Jack (Daniel Bourgoin). Jack is a bayou bad boy who has nightmares about deserting his alcoholic mother (Sabrina Lynn Gore) who committed suicide. Finally, there are Phanny’s parents. Lucille (Sharyn Peoples) is an impossibly good soul working three jobs to support the family while her husband Dominik (Elvin Negron) aimlessly pursues unrealistic pipe schemes to become a professional musician.

For absolutely inexplicable reasons, Phanny is deep into a relationship with charming Chad, (Taliesin Powell) a snooty, paternalistic, controlling and physically abusive heir to a Texas oil family who would seem anathema to a spirit like Phanny. Played and directed over the top, it’s indicative of the show’s problems that Chad would seem more appropriately found twirling a moustache like the villain in a 19th Century melodrama. He apparently changes from charming to an emotionally sadistic jerk once his cartoonishly snobbish parents come to check out their son’s fiancée.

Phanny does marry him so she can send money home to relieve her mother’s dilemma. But when the nightmare becomes unbearable, she leaves. Instead of resuming her supposedly burgeoning career, Phanny, again inexplicably, descends into a spiral of addiction and prostitution.

Everyone stumbles through a merciless wringer and protracted descent that includes abandonment, heroin, hooking, alcoholism, violence, disillusionment etc. etc. etc., which, no surprise, ends badly for some but leaves even the survivors badly chastened and their dreams pretty much shattered.

Much of this, again, is so melodramatic and unsubtle that you have to wonder if it was intentional, like a ritualistic Greek tragedy or a folk tale. It ends strangely with a weirdly uplifting anthem that argues contradictorily “We can’t escape our fate / No matter how hard we try / But in the choices we make / Our fate we do decide.”

In fact, Long’s music is an effective mélange of rock, jazz, reggae, torch, scat and a few other genres that are both melodic and moving. Her lyrics may be well-constructed and sometimes approach poetic, but again many of them were impossible to hear.

That score benefits immeasurably from the cast who wail and warble with skill and zeal. Suffice it to say that every last one nails their solos, caress ballads, blast out a rock anthem, provide flawless background vocals and go head-to-head in duets.

Their earnest acting ability varies although some of the shortfalls may be rooted in that script. For instance, Peoples and Negron overcome the dialogue effectively in a scene near the end when the AWOL husband tries to make peace with his abandoned wife.

Peoples, Long and Gore are co-directors who get those impassioned performances out of the cast, but the weird logistics of the venue defeated their staging. The space is a church with most of the pews removed. Chairs are set up on three sides of a long playing area with the dais/altar at the far end. The cast is ingeniously scattered throughout the venue, but scenes staged on the dais are too far away from the audience. Conversely, some scenes are played so far downstage that some audience members will be seated behind the action if the house sells out. Sometimes action played out in two locations with actors way back on the dais and way forward on the floor.

Long served as musical director with the assistance of keyboardist Dew Pendleton who sings and leads the drumhead-tight band of Danny Butler on guitar, David Carey on bass and Breun Deshun Brantley on percussion.

Praise must be given Peoples and Morrisette for a delightful collection of costumes that reflect a down-on-their-luck community dressing up for Mardi Gras — from raggedy jeans and bear-tooth necklaces to a clown’s multi-colored motley.

Christopher Archibald’s kinetic choreography is executed by the cast alternating between unbridled abandon and a Ginzu sharpness reflecting the razor-like angst inside their characters.

Bottom line: This work still needs work, but there’s considerable promise. Plus, hearing these singers open their vocal spleen in pulsating powerful performances to Long’s scorching heartfelt music make it worth the price of admission.

The Journey: The Story of Your Life runs through Jan. 30 from Outré, Theatre Company, LLF Productions and Arts at St. Johns playing at Arts at St. Johns, 4760 Pine Tree Drive, Miami Beach. (It is inside a church on the west side of the street just north of the intersection of 47th Street.) Performances 8 p.m. Thursday-Saturday (previously announced as 7 p.m.) VIP ticket patrons invited to 7 p.m. receptions. Running time 2 hours 10 minutes with one intermission. Tickets $20-$38. Call (305) 613-2325 or visit artsatstjohns.com/product/the-journey-2/